Tuning in to EXO Showtime and WINNER TV 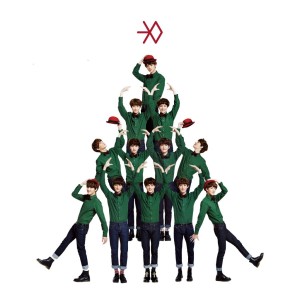 Among the several holiday themed releases in the last couple weeks, there were two groups that started their foray into a somewhat uniquely K-pop experience: their own reality-variety show. We, of course, know that Western media has a plenty of them on celebrities, toddler beauty queens, waging war through baking cupcakes and the list goes on. But as several may have noticed, just like how mainstream music is bombarded with idols, idols also seemingly rule the airwaves with their multiple appearances in variety shows, although if idols actually are worth the time is another matter. In fact, in can be argued that the one true way of cementing your image to the public is not through your music but through your own reality show where one can see the human side of the idol and relate with them. What more the reason for shows such as Infinite’s Ranking King, the various incarnations of Hello Baby with a new idol every season, the various MTV Diaries incarnations (VIXX, BTOB, MYNAME, Hello Venus and Nu’est are several Batch 2012 rookies to appear), Spica and Lee Hyori’s X-Unni and Match Up between Block B and B1A4 and its spin off starring Block B?

The last few weeks of a year seem like a strange time to start your own reality show but two idols have this year. The first is no stranger to reality shows, having been the focus of the recently concluded YG WIN where WINNER was crowned as the next boy band under YG Entertainment and will debut sometime early next year. The next is from an equally and arguably the most influential idol manufacturing entertainment company. This is EXO from SM Entertainment. Straight from their first Daesang from MAMA and multiple wins from their two releases earlier this year, Wolf and Growl, EXO is undoubtedly the leading rookie from Batch 2012 in terms of success.

Considering just how important variety-reality shows have become in selling an idol and their image to the public, how did the newest idol-based shows fare? Fair warning, if you have not watched the shows; please make a hasty retreat for there will be several spoilers.

First off is EXO Showtime, which as of release, has three episodes already subbed in English for us international fans who only know basic Korean. EXO Showtime has a very simple premise: the boys fulfill requests from the fans. It’s almost like one of the newest segments of Weekly Idol where fans have 24 hours to call in to the studio to ask something for the idol guests to do. Only difference it is the premise of the whole show and fans don’t call their question or request in but leave it at a message board. 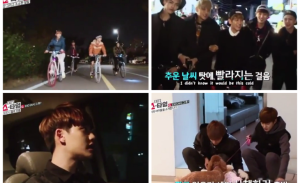 The first episode was quite enjoyable although the scripted-ness did leak in a few times here and there. But seeing as this is their first foray into their own show and that they are from SM Entertainment, it was to be expected. Case in point: anyone remember the first episode of SHINee’s dating-a-noona show back in 2008? If you don’t, good for you and if, like me, you do, let’s be thankful we have SHINee’s Hello Baby to wash down the second-hand embarrassment due to the awkwardness of that first episode.

There isn’t much to talk about in the first episode. The boys are led into a room, seemingly unknowing that they would be starting their first variety-reality show. After a series of prompts, the boys are set up and ready to answer questions fans want to know. From who members think is the most handsome (Suho won by a narrow margin), to how to tell each member apart (good job to Chang-min for knowing their names – stage name and real name), to who is the actual chicken mania.

I’d like to stop and say shame on you Kevin Ken Ben Ben Kris Wu Yi Fan Li Jiaheng. Chicken? Not your style? Onew would be ashamed.

In fact, I find it very hard to believe, based on fancams and the like, that Kris is that cold. Maybe it was a particularly bad day for the Chinese-Canadian giant of many names, but his attitude was borderline rude, almost as if he was assigned the role to be the next ice princess in the same capacity as the Jung Sisters. Or, well, ice prince in this case. Luckily enough, he was in a better mood in the second episode and was better to watch as he towered every other member but Chan-yeol.

The second episode was an improvement in terms of how natural the boys were. It featured the boys showing what they do on their time off. Several went to shop in Hongdae with Chan-yeol as their tour guide, then later went on to eat and suffer as a particular dish took an hour to cook and was thus eaten up in less than ten minutes. The Korean members of EXO M along with Lay and Luhan went for a bicycle ride and we learn that Chen must be some sort of Frost Giant for being able to wear basketballs shorts in the freezing cold. D.O. went for a movie alone and spent some time trying to get a photo-shopped picture of T.O.P and him sent on his phone. And of course, there was the long-awaited (?) debut of Kai’s children: Jjanggu, Jjangga, and Monggu. Kai, along with Suho, took the three dogs out for a walk. Or rather, we have Monggu dragging Suho along much to Kai’s amusement.

All in all, it is getting better and we’ll see how long it’ll last before the missions that are a must for every idol-centered show start appearing. Though it can be argued that what they are doing are missions itself. EXO-ception, good one PD-nim. 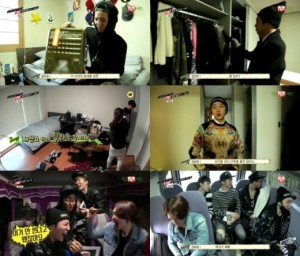 The second show to debut this winter is WINNER TV. Much like their descendants (Big Bang TV and 2NE1 TV), this is an MNet show where we get to see what the boys are like. For those who watched YG WIN and saw the boys win, it’s a continuation – we are now seeing the boys prepare for their debut in a manner where there are no nerves because they are not in a competition anymore. As Psy succinctly put it, the show is all about WINNER who took the WIN in YG WIN that is WINNER’s WINNER TV. Unfortunately, a name change is impossible and we are probably going to have to type in the sentence above when WINNER makes their actual debut.

WINNER TV also has a very simple premise in its creation. As CEO Yang explained, after seeing the composing skill of the boys in YG WIN, it would be a special treat for the fans to be able to see the process. Smart since the fans will easily feel invested, having to see what the boys had to go through between being declared YG’s newest boy group and their actual debut. While the premise is very simple, this show frankly had me laughing more that the previous show in this article.

While it may because there are simply less boys to showcase in WINNER and thus adequate screen time with less on the editing floor, the boys are simply crazy and let loose. And in the case of Seung-yoon, that is in a literal sense as we see the editing team mosaic his lower half as he just decides to take his pants off with no care in the world.

It’s most probably because they are rookies in all sense of the word, but we see the joy in everything they do in their eyes. We don’t see them with that ‘idol veneer of perfection’ nor do they have their idol-text-book roles at the ready. It is all very honest and doesn’t feel scripted in any way – it feels as if we have been let into what boys do when they are together. The joy of Jin-woo rooming with Seung-hoon and Mino rather than the maknae line cannot be faked nor could Mino’s despair of not being able to sleep due to Jin-woo’s snores. 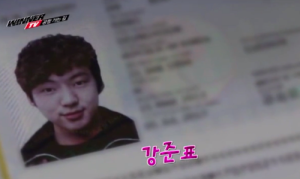 This is because there is literally no filter with these boys; we get all their antics with no reservations. The maknae line is boring in their hotel room whilst the hyungs party it up. We find out that Seung-yoon changes his underwear every other day, inducing ‘ewwwws’ not just from Mino but from viewers as well. We also meet their newest member of the family, Lee Hee, and get a lesson on how to pronounce it properly from Seung-hoon who wishes the young Chihuahua puppy to become as famous as “Gaho-sunbaenim.” We also meet Bumblebee and Pabyung-ie the suitcases and find out just how bad Mino’s passport picture is. But don’t mention it to him unless you want to listen to him proclaim that he got the picture taken in the subway. In addition to this, we learn that any drawing can be turned into Tae-hyun by adding his signature eyebrows and 5:5 hairdo.

But what the highlight of the first episode was the lead-up to their first stage since being proclaimed as WINNER: the opening act of Big Bang’s Japan tour. We see how they prepare for the trip, including how they prepare their airport fashion with Mino declaring that the trick is to try and make it look as natural as possible. The boys learn their songs in Japanese and learn just how different performing on a concert stage is from their previous stages. We see them stumble around a bit in their new roles and adjust accordingly.

All in all, the first episode reintroduces us to the boys and with the burden lifted from their shoulders to win a competition; they are much more in ease with their upcoming roles. We see them with the raw honesty and want to please and not mess up that we often see in pre-debut documentaries and in the eyes of rookies as they introduce themselves. With a much looser format than EXO Showtime, it seems as if we will have the boys in their natural habitat.

Both shows are quite enjoyable watches and promises to bring a viewer different things. For someone who wishes to see what idol life is outside of their schedules, there is EXO Showtime to give them a small taste of what being an idol that just won Album of the Year in MAMA is like. For those who want to see a behind the scenes look of a rookie preparing for a debut on such a grand scale like WINNER is experiencing, then WINNER TV is a must-watch. While it’s too early to say just how much from their off-screen personalities we will see, both shows are showing promise in their achieving the ultimate goal of making fans fall in love with them even more.