This will be the simplest and most succinct preface I ever have to write. EXO finally come back. This is as good as review reasons get.

So, is the MV any good? If you are looking for any inclination of a plot, then I would have to say you are only going to be very disappointed*. The whole music video is basically SM Entertainment doing what it does best, which is to put a group of really good looking guys in a very elaborately decorated room and have them do their best dance moves. 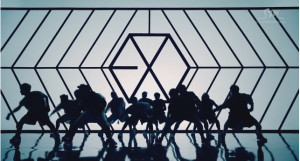 Speaking of decorations, apparently the only nod to the theme of the song, apart from the fashions, would be the claw-inspired structure in the MV set’s roof. The eagle-eyed might also spot that EXO “corporate logo” in the dance set’s background.

Although I am not the biggest fan of “Box MVs” and think it would not have been too hard to try to create a miniature sub-plot related to the song (how about something to do with werewolves? or even something to further expound the legend storyline first explored in “MAMA”?), the Box MV does have its merits.

(*I know that the drama version of the MV is coming soon [when, though?] but I think it would have made a more effective MV to incorporate both the musical elements — dancing, close-ups — as well as a story. Two birds with one stone, and all that.)

Firstly, to the delight of fangirls worldwide, the Box MV means all attention can be focused only on the guys they want to spazz on, rather than being distracted by sub-plots that require thinking through, or “worse still” an actress having to share screen (or possibly skin-ship) time.

Another advantage of a Box MV is the abundance of close-up shots, which would come in handy especially for a group which one has waited almost a year to comeback. The fashions and outfits do vary greatly, with Kai looking tough and suiting the concept, and some other members looking rather unfortunate in some shots.

And finally, the Box MV does play up the choreography. While I did like the one part where the group had a compact formation, 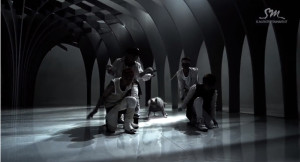 and then had one member jump out of it, much like a wolf emerging from a cave, the rest of it fell into the category of “masculine posturing” or “dance moves we may have seen before”, and in a time when guy groups have been impressing big time lately, it might not be enough.

And as for the song? Like most recent SM creations, it’s a mash-up of various clashing music ideas. It features a talk-rap, a fair amount of layered electronic sounds and distorted effects, a chorus that does not really appear to be a chorus and some higher pitched singing over a tune that does not seem to entirely sync with it. Yes, and all of it happens in the same song, and at times at the same time.

While this does keep the song exciting (for some people) over repeated listens, and it might grow on listeners after a while, one really wonders if the excitement actually comes from the song being that good, rather than the whole thing just wilfully breaking all the rules of song composition just to be “different, but not necessarily better”.

In some ways, this song is the SM Guy Group equivalent of SNSD’s “I Got A Boy”, fans are going to like it, and it might win fans with time, but it certainly will divide opinion for a long time, and its definitely very messy on first acquaintance. 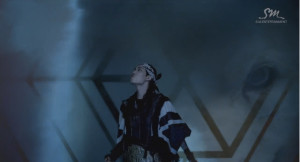 Lyrically, the song is the usual proclamations of love in the forms of metaphors, and a story of a guy being emotionally controlled by a woman. However, I am not a big fan of the Chinese version, due to how clumsy the metaphors and vocal deliveries are. Can somebody please get a real lyricist to work on the Chinese material and give vocal directions, instead of just trying straight up adaptations? For one, the forceful approach to singing is very at odds with the nature of Chinese diction, which tends to sound more gentle to the ears.

So to sum up, while the mere release of any material by EXO is sure to please fans and even casual K-pop observers (if for the simple fact they still exist), it is unfortunate that the whole thing does not really appear to be far superior to the competition, considering its long gestation. Beyond the hype and the expected big sales numbers, “Wolf” is as average as its 3/5 suggests.