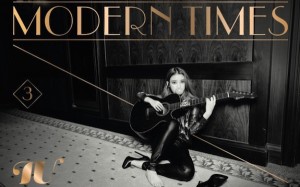 Modern Times, her third album, charted in the top 10 of several charts and title track “The Red Shoes” managed an all-kill almost immediately upon release. It makes sense, then, to release a repackage of Modern Times.

Modern Times: Epilogue will contain all the songs of Modern Times plus two new tracks: “Crayons” and “See You Friday.” “See You Friday” was composed by IU and features labelmate Jang Yi-jung from History. The lyrics for “Crayons” were written by IU as well and will be featured in an episode of her current drama, Beautiful Man.

Modern Times showed a maturer side of IU with strong jazz influences present throughout the album. It will be interesting to see if “See You Friday” and “Crayons” continue that theme or explore other genres. Until then, take another listen to “The Red Shoes” to satisfy your IU needs.

Did you like Modern Times? What style will IU’s new releases take?