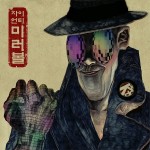 Hip-hop artist Zion.T is set to make a comeback December 19th with a four-track mini-album, Mirror Ball! The man has kept busy through featuring on plenty of songs throughout the year in addition to releasing his own first album. The title track for his upcoming release will be “Miss Kim.” The concept is said to be “trot dub,” showcasing Zion.T’s vocals. Though before the singer has taken inspiration from U.S. rap music, his new album will also incorporate a type of “Korean style,” which is certainly referenced to in the title of “trot dub” style. The album will bring music with a different air from what Zion.T has released before.

The teaser is all sorts of exciting with pinstripe suits, typewriting, rain, and crushed flowers, all in black and white until the last seconds and accompanied by a promising beat.

While I’m not sure what “trot dub” will sound like, Zion.T has a pretty good track record on music quality, so there’s a good chance of favorable music coming our way. What do you think, readers? Are you interested in what Zion.T has to offer next?