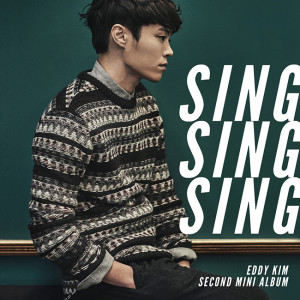 Following his stellar debut, Eddy Kim rings in the New Year with a sophomore effort that fans couldn’t have predicted if they’d tried. Sing Sing Sing is the type of sophomore most artists dream of: eclectic, fun and a little daring in parts. Though there were hints of his brilliance on last year’s The Manual, 2015 sees Eddy Kim coming into his own as an artist and taking a chance in a variety of genres that allow him to stretch his vocal chords and his lyrical adeptness.

Title track, “Sing Sing Sing” is a joyful piece of pop. Similar to the opening notes of The Manual, we get an earful of Eddy’s guitar, an energetic surrounding composition full of strings and a chorus of what sounds like excitable patrons at a local pub. There’s no other word to describe the song except “fun.” Truly, it’s an exciting ride, allowing listeners to even become a part of it before the album even gets into full swing. He implores his listeners to enjoy life, leave the stress and pressures of the world outside for just a moment and join him in a raucous neighborhood chorale: “With my guitar, I’ll sing for you. Follow me until your heart feels better. Hey now, hey now. Sing Sing Sing. Everything will be okay, yeah.”

“My Love” comes in on a thrush of strings and the crystalline beauty of a piano. It’s a gorgeous song that fully allows Eddy to explore his range and audiences to feel that emotion from the song’s beginning to its end. There’s a purity here that not even “The Manual,” my favorite tune of his, offers. There’s something raw about this song. Perhaps it’s the falsetto or even the way the strings come in to give the piano a more robust grandness, thus giving Eddy’s vocal performance even more height.

Our protagonist yearns for his lover, and he plays that ache across the piano. There’s almost an obsessive quality in the nature of the lyrics. He’s placed her on a pedestal so high that he fears he’s unable to even touch her: “I was going to touch you, but I hid my hand because you’re precious. I was touching the innocent piano and thought of this melody.” He proclaims that his love interest is the one and only in his heart, crooning, “My love, my love, I’ve given all my soul.” In that way, the composition is fitting. Beginning simply enough, calling his lover “My love.” However, as his emotions begin to swell, so does the largeness of the music surrounding his voice.

From worshipping the one he loves to bemoaning her indiscretions, we get lead single “Apologize.” The object of Eddy’s ire is not only a hot-and-cold lover, but a lover who keeps his heart on a string with little to no care: “You say it was like this, it was like that. With bravery, you treated me roughly but no more. Now I finally realized, this freaking love’s done.” He’s had enough of her games, of her playing him for a fool, and he demands an apology for all the heartache she’s caused him. With an aggressive musical composition and a darker edge to the softness of his voice, Eddy Kim totally lives in the moment of the song and gives a sturdy middle finger to the one who’s done him wrong.

Then, the album takes a turn even I couldn’t have expected. We get a whiskey-tinged taste of some blues in the form of “Shower Girl.”

There’s sex and smoke in this tune, Eddy’s voice surprisingly fitting well with the blues club atmosphere weaved into the song’s foundation. It’s cheeky and hot, a combination that fans got a taste of with last year’s “It’s Over.” However, Eddy takes it a step further and just drenches the song in sensuality. It’s a sweaty tune that makes one want to reach out and place a naughty hand somewhere it may not belong.

Sorry but everything here is for men
You’re going to smell like me
The sound of the water is already wetting my heart, oh girl

Oh baby, don’t worry about anything and comfortably take a hot shower tonight
Girl, but not too long because I’ll be waiting outside

It’s fitting that after that naughty bit of wordplay Eddy would give us a soothing song about the aftereffects of the breakup Eddy initiated in “Apologize.” “Lovin’ You” gives us a peek inside the mind of someone who just can’t get his former lover out of his mind. The love is still there, even if through the course of the relationship the fire may have cooled a bit. The musical foundation of the track has a softer roundness to it. The bitterness of “Apologize” has now simmered to resignation. There isn’t regret, but there’s a constant throbbing memory of his ex-lover’s effect on him:

Loving you again
Loving you, you’ve become my chains now

In the end, however, what’s left is an aching loneliness, something we’ve all felt at one point and have tried our best to deny. “Artificial Flower” is the album’s most elegant track, a brilliantly composed thrush of strings that reaches heights musically and vocally that until this point we haven’t heard from Eddy. There’s an obvious yearning here, but it’s much deeper than that, much more than just wishing one’s lover would return. Eddy is in pain, holding in his loneliness and sadness by wearing the mask of a mercurial flower that blooms and withers with the coming and going of the sun.

I’m a living flower, I can breathe
I’m not lonely

After the flashy lights turn off
My loud friends will leave
I’ll be left alone, thirsty
Silently shouting 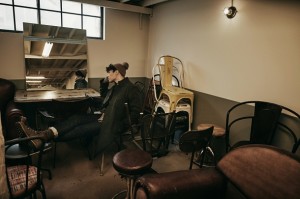 There’s a cohesiveness on Sing Sing Sing that wasn’t present on Eddy’s debut. There’s fuller musicality and a smooth quality to his voice that elevates the music to something ever so slightly more substantive than the mostly acoustic makeup of The Manual. And isn’t that we want from our favorite artists, to grow, mature and broaden their musical scope to offer us even more beautiful music in the future? Well, Eddy Kim certainly succeeds in that regard, gifting fans not only comprehensive pop, but also soul and even a bit of blues.

Sing Sing Sing tells the story of a man serious about his craft and so steeped in it he can find the fun, honesty and flirtatiousness it has to offer. If his sophomore effort is anything to go by, Eddy has so much more to offer the Korean music scene, and we’re all truly blessed to be along for the ride.