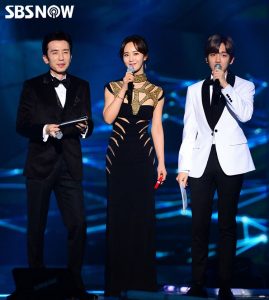 SBS held their annual Gayo Daejeon show on the 26th, which was hosted by MCs Baekhyun, Yuri, and Yoo Hee-yeol, and was jam-packed with spectacular performances and special stages that definitely made for a star-studded night. This time, the stages were split into different sections in attempt to better organise the performances; these segments include G-irl Crush with Mamamoo, Ailee, and Hyuna, and Y-outh with Got7, VIXX, and BtoB. Here, Elaine and Margaret recap the night and share their thoughts on the performances:

SBS Gayo Daejeon wouldn’t be the same without its countless errors, mistakes, and accidents; here are just a few of the many memorable mishaps during the night: G-Friend’s song being played when Twice was to perform (which led to awful fanwars breaking out over G-Friend’s pre-recorded audio), glitches with the audio system during EXO dancer Kai’s solo dance performance resulting in him being unable to perform, and videos of prerecorded stages being leaked online before the show. Not to mention the shaky camerawork both literally and figuratively — no one wants to see the screen quivering while cameras are on their bias, or the camera zooming out during a point move in the choreography. Given that there are similar complaints every year, it leads us to question: when will SBS learn?

Nevertheless, we thoroughly appreciated each and every artist’s stage; here are just a few of the night’s notable performances:

When SBS first revealed they would put together a stage with 91 idols at their Gayo Daejeon, many people criticised the idea, citing “too many unknown groups” and “it would be basically like Produce 101” as reasons. However, in my opinion, it is precisely these elements that made the special stage work. For one, it allows the show to invite a number of still relatively unknown groups, who may not have gotten the opportunity to attend these end-of-year shows otherwise. Secondly, it recalls the sheer fascination that the visual effect of a huge number of people dancing in sync creates, while still giving the original singers the spotlight they deserve.

The large numbers also allow for more interesting formations — take the chain effect of the jumping at the end of Gugudan’s “Wonderland,” for example. My only qualm is that I’m not sure if the coordination of the white outfits for the girl groups is an intentional decision, because if your goal is to stand out during your part, it isn’t the best idea to wear a very similar outfit to everyone else. In that sense, the male group stage was much more interesting to watch, as while there was a sense of unity costume-wise between groups, each group managed to communicate the individuality of their concept in the larger whole.

Gathering of the “Vocal Colour Gangsters”

To call someone a “gangster” in Korean slang means that they excel in a particular field, and given the group of singers and musicians gathered for this stage, this was certainly one of the most musically interesting performances of the night. The stripped down nature of all the songs performed made them worth a listen in itself, but I also liked how each song, despite adhering to the acoustic style, brought something new to the table — “Whistle” is a slow jam, “TT” remains lively and upbeat, and “Monster” is the dramatic bridge leading to the climax.

The highlight of the stage was, in my opinion, Rosé’s vocal colour — it fits right in with the genre, and is just so smooth to listen to; however, all the performers were aptly-selected within the groups and did well. Also, some random observations: while this set was labelled “Acoustic,” the latter two pieces performed seem more of the jazz style; I also love the fact that they gave the singers who weren’t playing an instrument shakers to compensate.

Concluding the B-allad Stage section of the night was an amazing performance of Yoon Jong-shin’s new single “Anyway It’s Christmas” with not only the original artist himself, but also Kyuhyun, Sungjae, Sejeong, Eddy Kim and Eunji. The selection of these singers was very well thought-out because the all the vocalists have similar deep and rich vocal tones, which suited the jazzy and relaxed mood of the song. This stage was one of the few Christmas-themed performances of the night, and it definitely got the audience into the warm holiday spirit.

The Legends of K-pop are back! Uhm Jung-hwa started us off with not one, not two, not three, but four (literally) dazzling performances, including “Watch Me Move”, “Dreamer”, “Rose of Betrayal”, and “D.I.S.C.O.”, the last of which was a highly-anticipated stage with Big Bang’s T.O.P. Following this stage was Sechskies with “Chivalry” and “Couple”, which was one of my personal favourite performances of the night. I must say, although I’ve been extremely disappointed with YG’s management of their artists this year, I remain thoroughly impressed with their styling — especially with fur specialist Ice Prince Sunghoon (pink hair be gone!).

The new, remade version of “Chivalry” — with its catchy chant at the beginning and strong choreography — made for a vibrant and exciting performance that most definitely hyped up the audience. They also sang live for both performances, an impressive feat considering their choreography. At the end of “Couple”, instead of ending the stage with their backup dancers, their management finally listened to fans as the legends stood proud up on a rising stage alone to finish with their trademark spinning arm and bow move, solidifying their place in K-pop history as one of the original first-generation idol groups.

I always love collaborations between boy and girl groups, and the cover Got7, Seventeen, Gfriend and Twice did of JYP’s “Who’s Your Mama” is certainly an example of why. While stages that involve male-female pairings usually perform songs that highlight the interactions between the two, such as “Troublemaker,” “Who’s Your Mama” doesn’t go down that route — it’s a lot of pure fun, with a groovy beat that engages that audience as well as the performers. The four groups selected to do this stage also have that fun-loving image that suits the concept, although I wish more of the members looked like they were enjoying themselves. All in all though, it was a well-carried out stage — the boys delivered with their sheer charisma, while the dancing of the girls was on point.

BTS Are Still on Fire

As always, BTS lit the stage with “Blood, Sweat, and Tears” and “Fire”. The pre-recorded opening showed with Jin playing the organ in accompaniment with Rap Monster’s monologue, setting the mood with the dark, religious undertones. This smoothly transitioned into their first song of the night — “Blood, Sweat, & Tears”.

One of the few things that the camera team did do right was the closeups on V and Jungkook during Rap Monster’s “Chocolate cheeks and chocolate wings” rap, their expressions and gestures are perfectly suited to the sensual lyrics. The group ended their stage with “Fire”, which definitely got the crowd on their feet, especially at the end when a ton of backup dancers joined the members in the knife-sharp choreography. It was also cool to see groups like Red Velvet and EXID lowkey jamming to their hit!

Firstly, let me just address something that bothered me throughout the entire performance: who was the stylist responsible for these stage outfits, and why the dandelion prints? Not only was it uncoordinated with the concept of “Monster”, the outfits as a whole were particularly drab looking for an occasion as special as this, and Xiumin’s crop top sweater flat out confused me. However, that aside, Exo’s stage that night was certainly an enjoyable one. Their performance of “Monster” was as powerful as usual, amplified by the atmosphere created by the prominent chants of the audience, and Baekhyun’s dramatic dance break.

Another creative touch was Kai and Sehun’s ending stage, not only because it brought a highlight from their concerts — dancing in water — to broadcasts, but also because it juxtaposes their strong previous stage with a more muted, graceful performance, showing versatility and generally switching things up.

Big Bang Ends the Night with A Bang (Bang Bang)

You know Big Bang is one of the top groups, if not the top, when they have their own VIP Big Bang segment during SBS Gayo Daejeon dedicated just to them. Aside from performing their new double title tracks from the MADE series, “Last Dance” and “Fxxx It”, they ended the night with a bang — literally with “Bang Bang Bang”. What I love about Big Bang’s live stages is that each one is different — they always manage to add in a bit of their own musical style and colour in it.

With this slightly remixed version of “Bang Bang Bang”, there was a stronger melodic guitar line in the instrumentals with shorter and punctuated beats in the bass lines. In particular, T.O.P. really changed up the chorus with his added “Uh-huh”, which surprisingly worked to enliven the frequently-heard track. Although this has probably been said over and over again, all the members have such strong stage presence and charisma, giving their all into each and every performance. Notable moments during the stage also include Black Pink and MCs Baekhyun, Yuri, and Yoo Hee-yeol cutely jamming to the chorus!

That were just some highlights from the show. What were your favourites and were there any stand out performances you want to also mention? Leave us a comment below!