BTS' Comeback Will Set You on "Fire"

BTS is indeed on fire. Five months after their promotions for Hwa Yang Pt. 2, they are back with their third and final installation of the Hwa Yang Yeon Hwa (HYYH) series, with “Fire” as the title track. Given the previous release of gentle, pastel comeback teaser photos, “Fire” is surprising and exhilarating with its intense flashes of colour and explosive sounds, bringing to the audience a very energetic BTS in full bloom.

On a basic level, “Fire” is a hype song. Its main draw is clearly the incredibly addictive beat that drops in the chorus. In fact, the song pretty much begins straight from the chorus, which actually comprises only the beat with an enhanced bass boom, and the chorusing of the title word. This is the highlight of “Fire” – and rightly so – even if the rap verses and pre-chorus hooks do pull substantial weight in completing the song.

Lyrically, the message of the song centres around pretty much the whole concept of HYYH, but with a brighter and more optimistic attitude. The boys sing about partying it up till dawn just because they want to, living life in a way that pleases them regardless of what anyone else says, and basically living passionately as if it were their last day on earth – YOLO in more artistic terms, if you may.

Live however you want, it’s your life anyway

While the general theme to the lyrics remains constant throughout, the verse by Rap Monster and J-Hope a third into the song is of particular interest.

Hey, burn it up; like you’re gonna set everything on fire

Hey, turn it up; until the dawn is gone

Who are you to compare me with others?

I’m only human (so what)

Much like “N.O.” and “Try Hard”, BTS is once again at it with the social commentary. In particular, while the English translation for the lyrics capture the general gist, the last two lines of the verse are literally translated from Korean to say “what kind of spoon are you, talking to me like that; I’m not a spoon, I’m human”. This is in reference to the ‘Spoon Class Theory’, a popular idea in South Korea which classifies people in society based on their backgrounds. In a nutshell, it appears that BTS is, again, speaking up against social norms and weaving in contemporary criticisms, even if the song presents as a party tune on the surface.

Turning to the music video, we see that the whole 4 minutes and 55 seconds were very seamlessly put together to reveal an exceedingly cohesive theme, even in the absence of a clear narrative. On a whole, the video seems to be vaguely reminiscent of Big Bang’s “Sober”, especially in terms of its colour scheme and the general strange-ness of the scenes. This might be purely out of coincidence, though, even if several BTS’ members are unabashedly fans of Big Bang. There is also something rather decidedly retro about their wardrobe and styling in this video, which should have seemed out of place, yet works curiously well with the whole idea of youth and freedom. 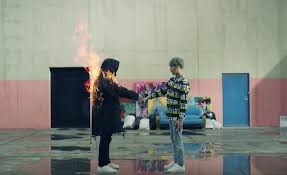 The most interesting scene in the whole video is, perhaps, the opening one. Without going over the top with the theories, it appears that the man in black Suga spots could possibly represent a number of things – fears, societal expectations, or even responsibility. He scales the fence, crudely decorated with bandages to proclaim the word “Youth”, and nonchalantly greets the man before casually setting him on fire. In doing so, Suga drives home the message of confidence and self-assuredness that is central to the entire song.

It is with the pressing of a button on Suga’s MP3 that sets the man on fire. It seems, then, that it is BTS’ song — or their career, or maybe just them, as a whole — that is setting the man on fire. This scene is also, unmistakably, BTS paying homage to Pink Floyd; the image of Suga shaking hands with the burning man is an exact snapshot of the album cover for Pink Floyd’s ninth studio album, Wish You Were Here.

As the video progresses, there are a range of scenes featuring the members singing, or rapping, and partying against a fiery backdrop, in what appears to be an abandoned warehouse which later transforms into some kind of underground concert venue. The eccentricity of the scenes is brilliant; it truly embodies the essence of the song – to ignore anything that anybody thinks and simply live life the way you want to. Why else would Jin allow V to iron his shirt while still wearing it, if not simply because he wanted to? Why else would V, again, be blowing stuff up on a tiny, old-school box television in a random, empty room, if not simply because he just wanted to? And the whole squad turning it up with a gas stove? Why not? 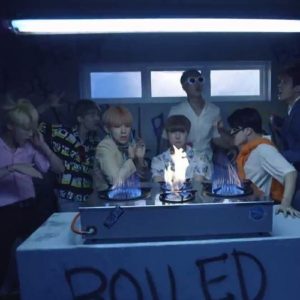 The choreography, courtesy of Keone Madrid, also features prominently throughout and boy, is it impressive. Behind-the-scenes clips inform us that it is the group’s hardest choreography yet, surpassing even that of “Danger” and “Dope”, which were previously agreed upon by the members to be the hardest dances. Difficult as it may be, tough, the dance is simultaneously cute and cocky, and is perfect in highlighting BTS’ nifty footwork, impressive synchrony, and inexorable energy.

Finally, this song and its music video is testament also to just how far BTS has come within the span of a year. How many groups, sans mega company power, can claim the financial capacity of hiring hundreds of extra actors to film a music video, or of a scene which includes the destruction of an entire car?

In terms of their roles within the group, too, there appears to be an increasing spread in the distribution of lines and screen time. Where previous songs had seen Jungkook and Jimin share most of the vocal lines, V and Jin have nearly as many lines as the other two in this track. Similarly, while J-Hope has always been less known for his rapping — especially in comparison to Rap Monster and Suga — it is he who opens the first verse in this song. In terms of dancing, there is actually a portion in the choreography where Suga gets to be in the front instead of relegated to the back, as he usually is. Comparing “Fire” to, say, “Dope”, from a year ago, it is a pleasure to see just how much BTS has grown, as musicians, as performers, and as a team.

Given all these things that BTS has done right in “Fire”, the only unsatisfactory aspect of the music video would perhaps be its somewhat confusing end. The song finishes up with Suga saying “I’ll forgive you” — what or who is he going to forgive? Also, after the boys’ performance literally causes the concert arena to explode, the screen blacks out and the words “Boy Meets What” appear. This is utterly random and makes no sense whatsoever, grammatically or otherwise. The only possible explanation that I can think of for the appearance of this peculiar phrase would be that it is yet more foreshadowing by Big Hit, of BTS’ future plans.

Nevertheless; putting aside these confounding details, it is safe to say that BTS has managed to outdo themselves, bringing to us a very solid comeback, and a perfect round-up to the HYYH era.

Do you have any answers to these questions? What did you think of BTS’ latest music video?