Anddd…. BTS has done it again. A badass song with a earworm-y unique chorus, paired together with sharp and energetic choreography — essentially how BTS has been hitting harder than their rookie group status, and portraying a maturity above their age. 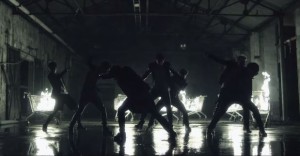 “Danger” is somewhat of a sequel to “Boys in Luv”. After “Boys in Luv” revolved around the boy’s confession and the couple’s seemingly happy ending, “Danger” kicks in to enlighten us to the reality — a relationshop on the rocks. The boy feels like he’s in a one-sided relationship where the girl is not invested at all, so he takes the initiative to warn the girl that the relationship is in danger.

“Danger” is very distinctly BTS, and its hard-hitting style is not the type to appeal to everyone. The track is a mesh of various styles, and it amazes me how this track transitions smoothly from Rap Monster‘s synths-filled raps, to Jin‘s light R&B lines, even to Suga‘s refrain that ventures into rock. Its overwhelming overlap of heavy instrumentals can sometimes lead to a noisy song, but the balance of all the contrasting elements seems just about right in “Danger.” 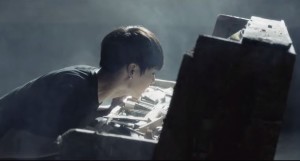 I also enjoy BTS’ self-composed lyrics, because its usually very clever –not too frivolous, not too cheesy, and just the right amount of elegance in it. Jung-kook‘s lines “We are like parallel lines, we look at the same place but are so different/ I don’t have anyone but you but why does it feel like I’m outside of you?” is possibly one of my favourites. The use of parallel lines as a motif for a couple stands as a testament as to how they might physically be together side-by-side, but their future will never ever cross.

While the verses seem more emotional and desperate on the part of the boy, the chorus seems to take it to another place. The frustration from the boy builds up to the point where he explodes, and issues a warning to the girl. Instead of pleading her as he was before, there’s a lot more sass and he decides to take control of the situation. The pregnant pause right before the chorus is extremely well-placed, and the climax after does not disappoint. 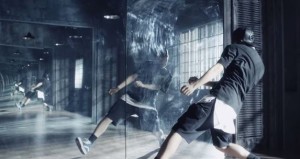 The MV starts out with the individual members in brooding shots, contemplating over the relationships that seems to be going nowhere. The members all work out their angst in different ways — Jung-kook and J-Hope distracting themselves through artistic means, while Suga and Ji-min sweat it out physically. And V contemplates his haircut.

As the song progresses, the boys still wait in vain for messages or calls from the girl, but to no avail. The bitterness and resentment build up to the point where they lose control — Jung-kook destroys his piano, Jimins breaks his punching bag, Suga throws his basketball out of the window, Rap Monster gives himself a tattoo, V cuts his hair. (A funny episode that happened during the MV filming: V accidentally snipped his own hair while cutting the wig, which might attribute to his shorter bangs during some of the dance scenes.)

The dark palette of the MV scream desolation and grunginess, and the styling choices of leather and denim further add to the overall grittiness of the MV. The deserted, beat-up looking practice rooms as well as the abandoned subway station all contribute to the emotions of loneliness and rejection that the boy feels because of being neglected.

Even if you don’t like the song, the choreography alone is worth a thousand mentions, and I like that the MV capitalizes on this. It’s powerful, it’s strong, and it screams “swag.” Probably one of their more challenging choreographies to date, it impresses me to no end. Ji-min totally commands attention when he takes centre-stage during the chorus, and his intense gaze into the camera contains much more charisma that you would expect from his goofy self.

Favourite points of the choreography? Firstly, the head-twist-cum-neck-rub at the start of the chorus slows down the accelerating anger from the verses, and it portrays a change of role from one who has been led by the nose, to one that is now calling the shots. Even the running move before the ‘warning’ is issued works as gearing up to the potential confrontation with the girl. Fortunately, BTS pulls it off with so much swag, that it conveys the accurate attitude of effortlessness. 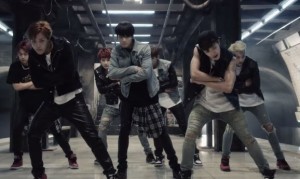 The crossed-arms shoulder shrug is also extremely suave, an attempt to appear macho, as they question the girl if she’s playing around with him. I absolutely love the way the lyrics and choreography collide, especially when V starts attacking his members one-by-one as he goes on his rampage of “It hurts so much because of you” and “You’re so bad,” an accurate manifestation of their inner turmoil.

I like the way BTS has been progressing in their music, continually showing maturing sides of them. While their music might not appeal to everyone, I think the amount of effort they put in to strive for perfection is undeniable and commendable. This MV is nothing flashy, but it works because most of them sell the attitude and charisma convincingly, although Jin could probably use a little more practice in the mirror.

So readers, how did you like the “Danger” MV? What were some of your favourite choreography moves?