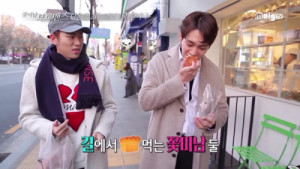 Following the success of the first season of MBC‘s recent endeavour, Celebrity Bromance, on its MBig TV channel, it was  immediately followed up by a second season featuring Block B‘s Zico and actor Choi Tae-joon.

In line with the series’ intention of featuring celebrity friendships, this second season focused on a date between Zico and Tae-joon, with about an hour’s worth of content split into four episodes, much like its predecessor. In comparison to the first season, MBC seems to have learnt its lessons from before and up-ed its game especially in terms of editing. There was noticeable toning down on the freeze-framing and comic replaying of scenes, as well as a marked decrease in over-emphasizing the “bromance” element between Zico and Tae-joon. The result is exceptionally pleasing, allowing for a smoother, less disruptive narrative as well as a more genuine reflection of the interaction between the two.

The first episode starts off by introducing the audience to Zico. He goes into a nearby cafe and meets up with Tae-joon, the comparatively less famous one between the two. In the first season between BTS‘s V and rookie actor Kim Min-jae, the focus had been slightly heavier on V than on Min-jae; so I had expected something similar with Zico and Tae-joon. But within the first 5 minutes of the episode, the audience quickly realizes that a more balanced approach is being adopted, with the friendship between the two revealing equal amounts of both their personalities. This is particularly refreshing and really makes the series so much more enjoyable. 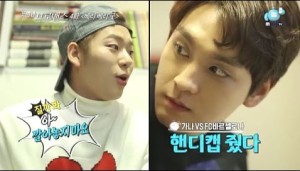 As the episode progresses, the audience is clued in to just how close Zico and Tae-joon really are. Their conversations consist primarily of very simple, almost mundane questions; but these are precisely the types of conversations that only close friends would be able to have.

Zico (Z): Yeah, the last time I did, it was with you. That was… about two months ago?

T: It was that time when you were really furious, wasn’t it?

Of course Tae-joon, as a good friend, does not go on to elaborate or explain why or what Zico had been so mad about, but this short snippet of a conversation could not have been scripted. The natural-ness with which it emerged thus only works to demonstrate the close relationship between the two. The camaraderie between them is further emphasized subsequently as they slip seamlessly in and out of various random self-activated scenarios. Out of the blue while walking through an alley, Tae-joon transforms into a neighbourhood bully and without batting an eyelash, Zico plays along immediately, taking on the role of the poor bullied kid, even ad-libing along with his friend. It is absolutely hilarious.

Amidst the fun and jokes, however, we are also allowed a glimpse into the slightly more sensitive side of the boys, when they spoke briefly of their concerns. Zico asks after Tae-joon’s brother who is trying to find a job in Seoul, and Tae-joon asks if Zico is doing alright after having had a tumultuous time in 2015. It is a nice contrast in mood and serves as a bit of a sweet, heart-warming reprieve. 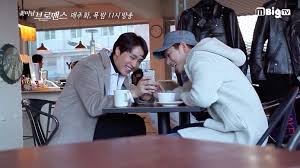 But the entertainment resumes in no time when Zico and Tae-joon adjourn to the latter’s place. After a short meal, the two play games and watch replays of a drama that Tae-joon had acted in. While playing video games, Tae-joon is clearly the better player and he makes sure Zico is well-clear of this fact. But Zico manages to get his revenge later on by making fun of Tae-joon’s acting. This mutual dissing occurred repeatedly over the four episodes, but it never ceased to entertain and it never seemed contrived — because, well, it wasn’t. The dissing that occurred was always good natured and in the name of good fun, with neither ever trying to one up the other.

Finally at the end of the last episode, MBC keeps up with the running trope of “bromance” and has mutual friends of both Zico and Tae-joon watch the series and react to it. This time, the honour was bestowed upon Eddie Kim and Jung Joon-young, whom had both been friends with Zico and Tae-joon for a long time. Watching their reactions, there is absolutely no question why the four are such bosom friends; they are merciless in their teasing and dissing, even calling Tae-joon at the end in an attempt to prank him. When the prank falls through, Joon-young hangs up abruptly; the epitome of a perfect friendship.

So on the whole, I’d say Celebrity Bromance seems to be on an upward trajectory. If MBC keeps going with this new and improved method of editing, there is no doubt that the series will be well on its way to gaining more viewers as it goes into its third season with ZE:A‘s Park Hyung-sik and SuperJunior‘s Ryeowook.

What did you think of the second series of Celebrity Bromance?