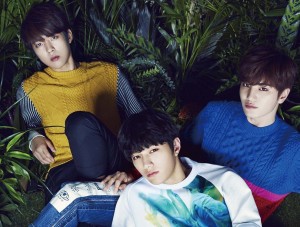 As news of Infinite F’s Japanese debut stirred up the excitement earlier this month among fans of the L, Sungyeol and Sungjong trio, Woollim Entertainment’s promise of a Korean debut for Infinite F on December 2nd sees us with the official MV for “Heartbeat”  in all of its adorable, vernal and magic-marker glory!

As a sub-unit of Infinite, it is not unusual that Infinite F decided to stick to the infallible cute and intimate route down the road of K-pop debuts. When Infinite H debuted last year with their album Fly High, Hoya and Dongwoo gracefully employed the neon and pop and made a memorable winter song with “Special Girl.”

What makes Infinite F different from Infinite H is the fact that Infinite F can go further in terms of versatility. With three vocalists, it is exciting to imagine the array of concepts and genres we would get to watch, listen, and enjoy. There is somewhat of a creative void within a group with three vocalists and no rapper that is easy to fill, and thus easy to please fans with.

Initially, Infinite F gives off the aura of an eye-catching and cutesy bunch of flower boys. Later on, I suspect that it will be easier for them to enchant us once more with a flashier, darker, VIXX-esque concept.

What works wonderfully for the MV is the warmth that is obviously emitted from the members. As they prance around and ice a batch of cupcakes straight from the heart, the spring flavour prevalent in the MV pushes away our winter blues.

Readers, what do you say to Infinite F’s “Heartbeat?” Does it make your heart beat excitedly?