Once upon a time, Infinite H was nothing more than a song on Infintie’s Over The Top album, a few performances at concerts and a lot of potential. But in less than seven months, Woollim Entertainment has given Hoya and Dongwoo the chance to properly promote as a duo with their début album Fly High.  Being a hip hop-based subunit (The ‘H’ standing for such), Woollim has spared no effort in getting artists like Primary, Zion. T and Dynamic Duo involved in creating Fly High; the company’s treatment of this venture as a bona fide project is really encouraging and it definitely increased people’s expectations.

Though Infinite enjoys the support of a loyal and loving fanbase, the septet are still not at the level at which they could put out any old thing and see it sell like hotcakes; as such, it is only sensible for Woollim to put in the required effort to ensure that Infinite H’s first foray would meet with success. Hoya and Dongwoo are not yet at the stage where they can write whole songs, so bringing on board people with more experience and current relevance, as well as the way Infinite H have been looked after as though they were people the company really believed in, can only be commended. Though not an Inspirit proper (I’ve been trying since the Infinite Exchange, though), the way this album has been created and presented impressed me, for the most part.

The first track, “Victorious Way,” is alright. But the more thought I give it, the more I realise how… generic it sounds. Infinite H brashly announce their arrival with an old school beat and scratching by DJ Wegun, and while it’s by no means bad, there is a feeling that this track was made because this was a hip hop album and there needed to be a song that the public could easily recognise as such. Yes, Fly High is a ‘H’ album, but it is an ‘Infinite H’ album, and, especially after listening to his Fly High completely, “Victorious Way” does not fully conform to the Infinite H sound presented in this album; Hoya and Dongwoo aren’t able to master this song and make it theirs, they do not (yet) have the skills to do so. That said, I loved the instrumental upon first listen, and although not congruent with this release’s overall concept, it fit in well with this teaser for the sub-unit: 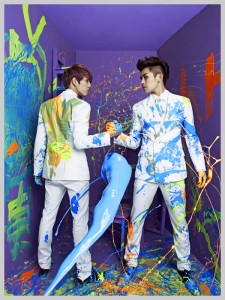 The title track and first of three Primary compositions on the album, “Special Girl (ft. Bumkey)” greatly juxtaposes with “Victorious Way.”  As noted in Nabeela’s MV review, the duo have a smooth and relaxing sound that is quite melodic (also, they are adorable), and “Special Girl” has all that with an extra dollop of mellowness that is accentuated by Bumkey’s vocals in the chorus. It’s sweet and unassuming, from Hoya’s simple “Let’s go” at the beginning (in stark contrast to the “Leggo” heard at the start of “Victorious Way”) and somehow even makes a line like “All day, all night long” sound less like an innuendo (a bit less…). The only complaint would be that this track is a tad too mellow, too slow — nonetheless, I guarantee you that regardless of how much you think this song drags, you WILL get the “Special, Special…” hook stuck in your head.

A more suave Infinite H is heard in the piano-accented “니가 없을 때 (Without You) (ft. Zion. T),” the chosen B-side for their debut stages. Like “Victorious Way,” this also feels fairly conventional, albeit better executed. The lyrics, a joint collaboration by Zion. T, Lil Boi and Louie, match the boys’ caring image but also bring out a more mature edge; it’s a great song for serenading your girl.

The down side to being such a nice guy is explored in “못해 (I Can’t Tell You) (ft. Gaeko);” the guy always puts his girl first, but when he realises the spark in their relationship is gone, he can’t bring himself to tell her. The instrumental here isn’t anything special, but what is special is how Gaeko sings the bridge leading into the chorus with a member of Infinite H. Fly High features vocalists with higher ranges than the duo, but that contrast in pitch is employed to great effect here. That harmonisation is probably my favourite part of the album.

And finally, we have a lady on the album! Woollim’s female vocalist Baby Soul features in the album’s namesake song “Fly High.” The up-beat tune serves as both a call to “carpe diem” and a thank you speech dedicated to their fellow Infinite members and fans alike. Like a good Thillana, “Fly High” is a joyous celebration and a conclusion which fits in seamlessly with the sound of the rest of this album. The lyrics are confident like in “Victorious Way,” but the presentation here is much more in keeping with the overall Infinite H sound. 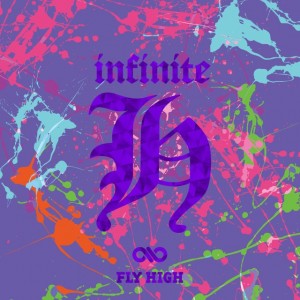 Overall, I enjoyed Fly High, an album which has solidified the duo’s image and sound. Though going in a different direction to their first song “Crying,” this is something that works well for Infinite H and makes them stand out from the crowd. This is a good start, but it also brings to mind all the possibilities for Infinite H. If Woollim decide to continue with the duo alongside Infinite (which I hope happens), seeing more collaborations, a greater variety of featured artists (more female vocalists would be great), Hoya and Dongwoo writing more of their own raps and trying to introduce more variety to their consolidated sound.

With the positive reception the album has received (like seeing an immense amount of pre-orders and topping the Hanteo chart on debut), and the work they’ve put in to generate this much interest, Woollim would be foolish to not capitalise on this opportunity. I hope that any subsequent releases do not devolve into cash grabs, but looking at the company’s track record so far, I am feeling cautiously optimistic about Infinite H’s future; the only issue would be in how the group and sub-unit activities are managed simultaneously.

Fly High charms a 4 out of 5 from me; what score will you give it?