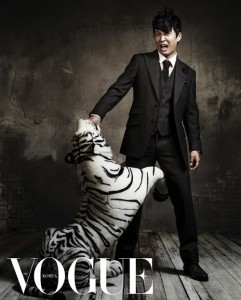 In South Korea, he’s been called the “Einstein of Entertainment” and one would be hard pressed to disagree as Cha Tae-hyun is a master of manipulation and has a guileless gift of gab.  While he made a name for himself with comedies, he’s also had success with more serious roles, singing, and his work as a DJ. He’s experienced the highs and lows of stardom throughout his career and overcame a debilitating anxiety disorder to find his way back to the top.

Cha Tae-hyun was born into a family entrenched in Korean entertainment.  His father worked for KBS as an assistant director of special affects and his mother did voice over work for many popular Korean cartoons. His brother also entered the entertainment field and was the producer of one of his more recent movies The Grand Heist.  Cha Tae-hyun made his debut at the age of 19 in 1995 when he won the silver medal in a KBS talent competition. In the next few years he would star in over ten K-dramas, have his own show as a DJ and debut in his first movie.

It wasn’t until 2001 that Cha reached critical success with a starring role opposite Jun Ji-hyun in the internationally successful romantic comedy My Sassy Girl.  The movie would prove to be Korea’s highest grossing comedy at the time and spurred US, Bollywood, Chinese and Tollywood remakes and a Japanese drama.  Cha Tae-hyun also won the 2011 Blue Dragon Award for Best New Actor for his performance in the movie.

It was through My Sassy Girl that I was first introduced to Cha Tae-hyun.  Back in 2003, a co-worker of mine was a huge fan of foreign films and would religiously attend as much films at the Hawaii International Film Festival as he could.  When talking about the film festival and the foreign films that he enjoyed with the people in our office, he told us that we HAD to watch his favorite film, this one Korean film called My Sassy Girl.  We all were interested and so he brought in the DVD and over the course of two days of lunch breaks we watched the movie.  Yes, it was funny–brutally so as Cha Tae-hyun’s character got numerous beat downs by “the girl” played by Jun Ji-hyun, but the movie also had a lot of heart.  Its exploration of sorrow, compassion, fate and the sometimes painfully ugly side of love struck a chord with viewers everywhere.  And as for me it was a movie that I enjoyed so much it opened my eyes to the joys of international films where I once thought only stuffy, weird, mind-blowingly odd films existed.

At the time Cha Tae-hyun was riding the overwhelmingly popular wave of My Sassy Girl, which was released in July of 2001,  another huge event soon happened in Korean entertainment.  That event was the release of the K-drama Winter Sonata in January of 2002 and the start of a little thing we all know and love a building interest in all aspects of Korean entertainment–something called Hallyu.  The international success and attention was something I’m sure no one could have predicted at the time and only served to further Cha’s climb to the top.  Following another one of his dreams, Cha also released his first album Accident in 2001 with songs written by his high school sweetheart, on and off girlfriend of thirteen years and eventually his wife, Choi Suk-eun.  He would later release another album The Book in 2003 and also released several singles that appeared in the OSTs of many of his dramas.  Check out the MV for one of his most popular songs “I Love You” which features actress Shin Min-ah.

His next movie released in 2002, a melodrama opposite Son Ye-jin called Lover’s Concerto, was also a huge hit and it seemed as if there would be no stopping Cha Tae-hyun.  But as we all know what goes up, must eventually come down and most of his film and drama projects from 2003-2007 were considered failures. It was during this period that Cha Tae-hyun began having panic attacks due to stress and the inevitable fall in popularity.  He admitted on an episode of the Korean talk show Healing Camp that he had his first panic attack on a flight to China where he experienced extreme anxiety and trouble breathing and to this day he doesn’t like to go on long plane rides.  Although he knew that the height of popularity couldn’t last forever, the reality of it actually happening brought stress beyond what he could handle with him having panic attacks on set and actually passing out due to the attacks when he saw low ratings for the dramas or bad reviews for his movies.  He had wanted to have one more hit before getting married, he was shooting for getting married at 30 and we all know that for some Korean celebrities their careers are all downhill after getting married, and suffered much because he was unable to do that.

He did eventually get married to his wife in 2006 at the age of 31, and with the love and support of his wife he was able to overcome his panic attacks and once again be his confident self.  In 2007, he found moderate success with the film Highway Star as a masked trot singer and began DJing once again with his own show KBS Cool FM’s Mr. Radio from 2007-2008. In 2008, he starred in a movie as a former idol turned popular DJ playboy with a talk show that finds out that he has a daughter and grandson that he never knew about called Speedy Scandal. The combination of heartwarming family tale and Cha Tae-hyun and the cute kid made the movie the #1 movie of 2008 and with over 8 million viewers in attendance became one of the most popular Korean movies of all time and just what Cha needed to get back to the top of his game.

After the success of the movie, he once again become a top endorser of CF deals in 2009 and also found success with his follow up movies Hello Ghost (2010) and Champ (2012). While I have seen and enjoyed most of Cha Tae-hyun’s more popular works, the Cha Tae-hyun that I came to know and love was due to his appearance on Family outing.  Anyone who can fluster the Nation’s MC, baffle the Game Devil, and cower Kim Jong-kook is worth knowing and being a fan of.

Someone who’s funny and can make people laugh is always someone high on my list and Cha Tae-hyun can be funny without even trying.  He’s pure gold on variety shows and I’ve loved every appearance of his on Family Outing and Running Man.  I was pleasantly surprised when he decided to join the cast of the second season of 1N2D.  Pleasant, because I knew he would be hilarious on the show–surprised, because he chose to be on 1N2D which is a very physical and goal oriented show.  He didn’t get the name of Cha concubinefor nothing–his laziness on variety shows is a well documented fact.  But he did join 1N2D and has said that he enjoys it much to the delight of viewers everywhere.

What I like most about Cha Tae-hyun is that whether it be in a role he plays, in variety, or in an interview he always seems genuine and down to earth. He’s also honest, sometimes brutally so (much to the consternation of his friends–also revealed during his Healing Camp appearance). I also love that he loves his wife and that she was his first and only love, that he admitted to hating kids–but when he finally had kids of his own couldn’t imagine how much he’d loved them, that he admitted to being a “Mr.Mom” and loves to take care of his kids, and I admire that he has a close group of friends–the infamous “Dragon Club” made up of singers Kim Jong-kook and Hong Kyung-min, and actor Jang Hyuk.  And even though he’s famous, he seems like he’d be your friendly funny next door neighbor–who just happens to be an internationally known movie star.

Other than his appearances on 1N2D, Cha Tae-hyun is finishing up the run of his current K-drama the saeguk romance/fantasy/comedy Jeon Woochi co-starring After School‘s Uee.  The drama has only a few more episodes left and is doing well in Korea with its ratings surpassing those of the recently completed Park Yoochun/Yoon Eun-hye drama I Miss You.  Unfortunately, the drama doesn’t seem to be as popular internationally as subbing for the drama has been slow.  But if you’re a fan like I am or just interested in checking out the drama, you can do a marathon when it’s completed.

I hope you enjoyed this Spotlight into the career of Korea’s “Einstein of Entertainment,” Cha Tae-hyun and will check out some of his work, if you haven’t already.