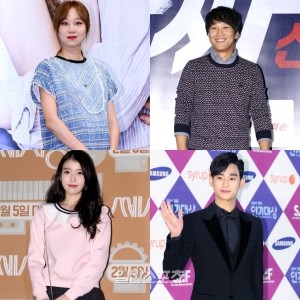 Dream High fans get excited: There’s a reunion coming! Well, a reunion of sorts. It has been announced that star actor Kim Soo-hyun and singer-actress IU will once again work together. The pair will team up with fellow leads, veterans Gong Hyo-jin and Cha Tae-hyun for upcoming KBS drama (possibly titled) Producer.

The drama will be based on the work of variety show producers. IU’s character will be relatable for her, as she plays a top singer, but with an icy demeanor. Meanwhile, Kim Soo-hyun will play a young producer who joins the entertainment world for love instead of becoming a prosecutor.

Gong Hyo-Jin and Cha Tae-hyun round out the four leads. Cha’s character will be a prolific producer, with questionable standards on what is deemed suitable for a show, and serves as a mentor to Kim Soo-hyun’s character. Gong will play an arrogant, yet perhaps still foolish, veteran producer.

This will also reunite Kim Soo-hyun with the writer of You Who Came from the Stars, Park Ji-eun. Producing the show is Seo Soo-min: chief producer for KBS’s Happy Sunday line-up, which includes shows such as 1 Night 2 Days. This should add an extra special element in that the producer of the drama has an inside look on what really happens behind the scenes of variety shows.

With the loaded cast of experienced leads and interesting subject matter, Producer should gain a lot of attention and be a good watch. It will be nice if we see some breaking of the 4th wall or plenty of the wink-wink-nudge-nudge jokes about what really happens in K-variety (such as seen during King of Dramas).

The drama is hoping to start airing in April. Who is looking forward to the reunion? Do you plan on checking out the drama when it airs?