The Potential of a Theoretical Sub-unit: Infinite H 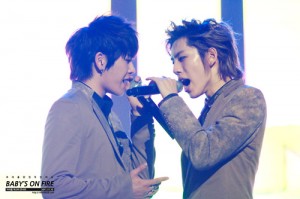 My fellow writer Michelle recently wrote an article about the newest trend in K-pop: sub-units. As she explained, sub-units have the virtue to bring something new to the table. Infinite‘s very own sub-unit, Infinite H, has all it takes to be a great sub-unit — the only thing is, it isn’t a real one.

Infinite H is comprised by members Hoya and Dong-woo, and the H is supposed to stand for ‘hip-hop’, which isn’t strange taking into account that Hoya and Dong-woo are Infinite’s rappers as well as main dancers. The reason I wouldn’t consider Infinite H as a real unit is because well, they haven’t released any duo material solely on their own. Their duo acts consist of a song in Infinite’s full-length album Over the Top, a dance battle and a couple of joint stages in concerts.

Firstly, triple-threats in K-pop are unfortunately not that common, let alone having two in the same group. Hoya and Dong-woo are both skilled dancers, decent rappers and surprisingly good singers. Sub-units that aren’t made out of the main singers such as Super Junior K.R.Y. often base their appeal in the complementarity of the members: singer/rapper in SISTAR19, boy/girl in Troublemaker. Infinite H wouldn’t really need to rely on that since they both can sing and dance, but at the same they do complement each other — Hoya is a better singer, while Dong-woo has better rapping skills.

But above all, they are both outstanding dancers. Dance duos are not that common in K-pop, but if JJ Project has taught us something, it is that they do work on stage — and you basically get rid of the weakest links, so the choreographies can be more sophisticated and complex. Hoya and Dong-woo have already made use of these advantages in their duo dance stages, which aren’t a mere display of their skills, but also a demonstration of team work.

Hoya and Dong-woo also have probably the best on-stage chemistry in Infinite. They aren’t only close friends, they also have a similar style and taste, making them totally compatible. They are also two of the members with more stage presence and know how to work it out together. I’m pretty confident they can rule the stage by themselves — actually, I don’t even need to guess, they have had enough duo stages to pass the beta stage.

They even have a style to start with: hip-hop. Let’s be honest, they aren’t GD&TOP. They are still idols with no underground experience and, although both have tried their hand at writing their own raps, they still have yet to write a whole song. Yet they have proved they can pull out a hip-hop song written for them, especially low-tempo melodic tracks like their own track “Crying” or the Verbal Jint‘s “You Look Good” cover they performed at their Japanese concert.

Infinite H could also work as a way to promote two overshadowed members. While Infinite doesn’t specifically have a problem with one or two members being overexposed, they still rely quite a lot on the individual activities of the members (dramas, musicals, varieties, etc.). With Hoya being cast in a new sitcom, he is finally getting his own share of the spotlight; Dong-woo, however, is still underexploited.

All in all, since the purpose of sub-units is to offer new sides of the groups or experiment with new genres, Infinite H could be the next kick-ass sub-unit (somebody please name me personal adviser of Woollim‘s CEO). How cool would it be to see an Infinite unit doing hip-hop, a genre they haven’t really touched yet? And how awesome would it be to have a hip-hop dance group promoting? Well, in my humble opinion, pretty amazing.

What do you think about the potential of Infinite H, Seoulmates? Would you also be rooting for a solo album were it to happen? Share your thoughts below!