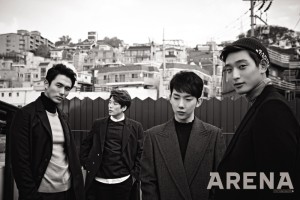 Despite news last December that the 2AM members were likely to renew their contracts come their contract expiration in February, JYP Entertainment has announced that Seulong and Jinwoon have decided to part ways with the agency. Jo Kwon has chosen to stay with JYP, and Changmin still has four months left in his contract with Big Hit Entertainment, a JYP subsidiary.

The unfortunate group split did not stem from any internal group conflict or company disputes, but rather from a division of interests. Jo Kwon plans to focus on his singing career and musical theatre roles, and it’s understandable that he’s decided to stick with JYP out of loyalty since he has been with the company since 2001. Jinwoon and Seulong, on the other hand, have been taking on more drama roles and thus intend to develop their acting careers. Seulong has already signed on with SidusHQ, and Jinwoon is in the last stages of negotiation with Mystic Entertainment. It’s stated that Jinwoon still wishes to balance his passion for music and acting, and thus Mystic Entertainment, which houses music label Mystic89 and Family Actors, seems to be the perfect home for him. It looks like Lee Joon is not the only one leaving behind his idol calling to try his hand at acting. 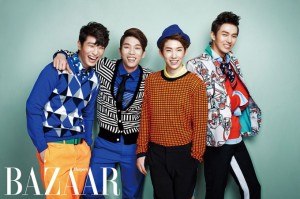 However, fans can find a glimmer of hope in possible future group activities. A JYP representative commented that although the members are currently concentrating on individual activities, if the conditions are right, there’s still a chance that they will carry out 2AM group activities. So all hope is still not lost! Perhaps they can pull a Shinhwa and promote as a group even if they’re signed by different agencies.

The day this news was released, Jo Kwon took to 2AM’s fancafe to comfort and thanks his fans.

I only had my eyes set on 2AM for the first chapter of my life; I was worried about how the fans who followed us up to now wouldn’t know what to do because of the unbelievable betrayal and shock, and my heart hurt.

The four of us definitely always ranked 2AM at 0 [even before 1]. Whether it’s at the beginning or in present time, 2AM is always happening. I’m telling you this is not the end.

Indeed, we hope that this is not the end of 2AM. As one of the few ballad idol groups, their presence will be sorely missed. Still, all the best to them, and let’s hope for a 2AM reunion someday!

What was your favourite memory or era of 2AM?