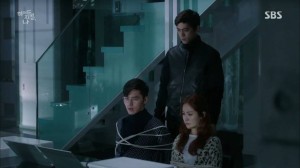 We begin the week right where the action left off. This was supposed to be the grand face-off between Seo-jin and Soo-hyun, the battle that we’ve awaited for weeks. After building the tension and the psychological cat-and-mouse game, this final meeting had to live up to some pretty high expectations. Unfortunately, it fell a little short.

While the emotional delivery of the scenes was decent, what ruined it was the completely un-scary way it was done. I was having cringing flashbacks to the “traumatic” kidnapping and warehouse gas scenes. From the very beginning I wasn’t scared, since Soo-hyun (Sung Joon, Lie to Me) waltzed in and took Ha-na hostage without a single weapon. Am I supposed to believe that neither Ha-na nor Seo-jin could throw a punch? Even a scalpel would have at least done something to convince me that two grown adults had no choice but to be tied up. And despite years of progress in hostage-taking tactics, Soo-hyun chose to tie his victims up cartoon-style with loops of thick rope around a chair (doesn’t he know villains use zip ties or duct tape now?!?).

But then it got worse: Seo-jin’s (Hyun Bin, Secret Garden) ropes weren’t even taut on his body, and Ha-na (Han Ji-min, Rooftop Prince) had her hands tied in front of her. All they literally had to do to escape was stand up and wiggle the chair loose. Better yet, stand up, ram the chair into Soo-hyun (who doesn’t have a weapon!), then walk away. The whole situation was made even more frustrating when the police showed up and couldn’t seem to figure out how their entire S.W.A.T. team could take down a single man (WHO STILL DOESN’T HAVE A WEAPON). Instead, the people outside kept lamenting how dangerous Soo-hyun was. 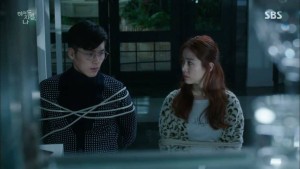 All of it killed the nail-biting aspect of the drama that was supposed to be part of the climax. So even though there were some touching and emotional moments, the lack of real danger made it seem almost funny. I had pretty much the same feelings that I had when Seo-jin and Ha-na were suffocating from the gas in the warehouse: if you don’t put up a fight for your life, I stop really caring whether you live or die.

After this comical “thriller” segment, the series did get back to doing what it does best: creating characters with some depth. The breaking point for Soo-hyun is when he recovers his memories. It was bad enough to see his father’s accident, but then the kidnapper made him believe that everything was his fault. Rather than the noble tale of a father rushing to rescue his son, Soo-hyun realizes that his father basically killed himself for money. Finding out that his father wasn’t a hero is a devastating piece of information, but Soo-hyun didn’t quite have the emotional breakdown I was expecting. I’m not saying he had to be crying hysterically, but the acting could have been a little better to show just how far Soo-hyun had fallen. His world basically just caved in on itself, but Soo-hyun doesn’t seem as bothered as he should have been. 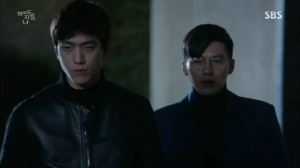 Seo-jin’s relationship with depressed Soo-hyun mirrors his former relationship with Robin. Seo-jin has grown to the point that he accepts his past and sees hope that he can be the good guy. In contrast, Soo-hyun has fallen from grace and has a lot of self-hate. Seo-jin decides to help Soo-hyun “escape” from this new darkness he’s feeling; he wants to save him. Like Robin and Seo-jin’s old relationship, Soo-hyun also saw his struggle with Seo-jin as a competition, not as a way to heal. This is why when he recovers his memories he says “you win” rather than “you were right.”

Seo-jin even repeats to Soo-hyun what Robin said to him, “Let’s live.” Later on, Seo-jin continues to act as Soo-hyun’s Robin, bringing him a drawing that triggers happier childhood memories. He also brings up an interesting theory: Robin might be a good cartoonist because Seo-jin never forgot his artistic friend. Even when Soo-hyun tells Seo-jin to let him go, he refuses and says he’s committed to his one friend. He wants to be a shield for Soo-hyun in this difficult time, just like Robin was for him. 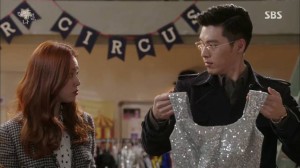 Speaking of “the twins,” who else is loving how they are portraying Ha-na’s romantic relationship with Robin and now Seo-jin? No matter whose team you’re on, each is very positive. Neither Robin nor Seo-jin is playing the emotionally and physically manipulative male lead typically seen in romance dramas. Nothing kills my interest in a drama faster than when I see the all-too-familiar nice guy, poor girl, rich jerk love triangle. Boys Over Flowers somehow brainwashed me into enjoying it, and I tolerated it in Coffee Prince because of the underlying messages, but by Pasta I was done (even Lee Sun-kyun couldn’t make me finish that series).

Seo-jin shyly asking if he can love Ha-na (asking for her consent) shows that yes, male characters can have more emotional maturity than a spoiled toddler. Seo-jin didn’t act like a petulant child after being rejected either. Let’s not forget that Ha-na fell for Robin first, you know, the guy who wasn’t jerking her around by the arm and threatening her. She chose him over Seo-jin because although she likes helping him, Robin gives her comfort. Instead of being naïve about the situation, Ha-na is convinced that Seo-jin likes her because of some form of erotic transference (when a patient falls in love with a doctor or caregiver). So kudos to the writing team for creating a female lead I can respect as well. 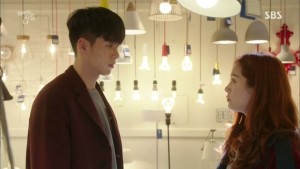 In another small scene, the drama also sidestepped the rich-and-angry-parent trope. When Ha-na met with Seo-jin’s father, I was just waiting for an angry tirade or threats to keep away from his son. Instead, I was pleasantly surprised that the chairman spoke in almost loving manner. After talking with Ha-na and realizing that she did not love Seo-jin and that she believed he didn’t truly love her, he calmly asked her to leave. In those moments he showed genuine concern and care for his son, and it was clear that he was asking her to leave because he wanted his son to heal, not because he hated Ha-na for her family background or some other overused reason.

Keeping Seo-jin’s father from being the bad guy also makes the situation more complicated; all of the pressure and responsibility is on Ha-na, Seo-jin and Robin. There are no outside forces to blame or demonize. And so we are kept in this uncomfortable grey area where we like both Seo-jin and Robin, and yet we want them both to have fulfilling lives. Once again we are left with no easy solutions. Either one has to disappear, or they have to figure out how to lead a full life in half the time. And now that both have feelings for Ha-na, there definitely can’t be a happy ending for everybody.