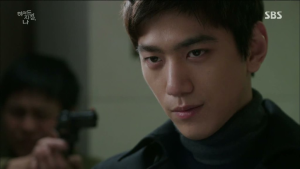 We’re nearing the end of the series, and the show continues to keep a steady pace. It’s in these episodes that Soo-hyun (Sung Joon, Lie to Me) begins to seriously waver in his resolve, going from extreme doubt to complete certainty about his revenge plot. We can see this in the way he treated Dr. Kang (Shin Eun-Jung, Misaeng), who acted as his inner voice. Whereas before Dr. Kang was kept tied up with her mouth taped over, Soo-hyun started to let her out of the secret room and eat with her. And with this new freedom she could challenge Soo-hyun even more, pushing him to face the truth.

After so many years of demonizing Seo-jin (Hyun Bin, Secret Garden), he’s reluctant to believe that Seo-jin could get better. Soo-hyun is deeply troubled and desperate for someone to take responsibility for what happened to him. His reaction to the trauma was to seek revenge out in the world, while for Seo-jin his reaction was to punish himself. Both suffer from incomplete memories and a warped viewpoint of the past but are dealing with it very differently. Seo-jin’s journey has been one of redemption and self-forgiveness since he’s always seen himself as a bad person. But Soo-hyun’s journey is one that might take him from a place in heaven to a seat in hell. He’s prided himself on being the good guy, the true victim. However, allegations that his father, and maybe even he himself, had a part in the kidnapping threaten his whole self-image.

The possibility that he might be the bad guy brings out the worst in Soo-hyun, and he becomes even more determined to blame someone. He clings to the hope that hurting Seo-jin will somehow bring him peace. As Dr. Kang, his moral compass, said, nothing he is doing to Seo-jin will really change anything. The only real danger is that Soo-hyun will end up losing himself in his pursuit of revenge. He’s already lost his reputation and is on the run from the police. Since he no longer has Dr. Kang to coax him back to reality, it’s likely that Soo-hyun will do something even more extreme. At this point, he might go full-Hyde. 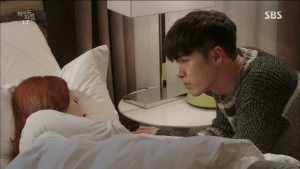 When they had a common enemy, Robin and Seo-jin worked together to bring Soo-hyun down. But with Soo-hyun on the run, the problem of whose life is whose takes center stage. Seo-jin still believes that Robin is him, and he feels entitled to everything Robin has. Robin is adamant that he’s his own person, and he is trying to protect everything he’s built. In a way, they have switched roles. Before Seo-jin was the one that felt threatened and unsure of himself. He saw Robin as a usurper, something that needed to be amputated. But now that he has accepted his condition and his past, it’s Robin who feels vulnerable. His secret is out now, and he knows that people will probably see him as a symptom, not a person. For the first time, he’s facing other people who Seo-jin feels comfortable confessing to. For Seo-jin, telling the truth eases his burden. But, for Robin, the truth calls into question his right to exist, and he feels that he’s losing control over his life. He knows that people will pity Seo-jin but will be wary of him.

In addition, it’s even harder for him because Seo-jin is willing to share his life now, seeing Robin as personality traits that can be reabsorbed over time. Even Ha-na (Han Ji-min, Rooftop Prince) is willing to split her time and protect Seo-jin, too. In an attempt to validate his personhood, Robin is setting strict rules (just like Seo-jin did at the beginning). He tries desperately to make something exclusively his, starting with the 12 hours a day when he is awake. Ha-na is banned from talking about Seo-jin, just as Seo-jin banned her from talking about Robin. But even with these limits Robin sees Seo-jin invading his life, such as when Seo-jin took care of his girlfriend when she was sick. Complicating things further is that Seo-jin is acknowledging the feelings he has for Ha-na, so of course he tries to out-do Robin by cooking a lavish dinner for her. Since he doesn’t see Robin as a separate person anymore, charming Ha-na is a way to reclaim and reintegrate his “Robin parts.” The struggle between these two still has no easy resolution, and I’m looking forward to how the series is going to solve this problem. 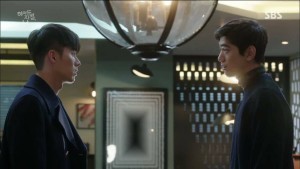 This was one of the better weeks of the series since we wrapped up some plot lines and started new ones. It’s good that now everyone knows who Soo-hyun is; they couldn’t have dragged that “mystery” out much longer, and it was already becoming a bit tedious. I did, however, really like how Seo-jin revealed his identity to Soo-hyun. It wasn’t over-the-top dramatic, just a simple, almost calm, surprise. Because of this, you could really see the devastation as it slowly dawned on Soo-hyun that he had been outwitted; he knew that everything was over. His escape was not so believable though. They did try to foreshadow his all-powerful hypnosis skills when he met with the police, but I doubt that a few seconds of hypnosis music could incapacitate everyone at once. I would much rather have had him fight his way out because at this point Soo-hyun is really showing his Hyde side. We end this week with Soo-hyun breaking into Seo-jin’s house and taking Ha-na hostage, so it would have made more sense if we had seen more of this sinister side.

With Soo-hyun taking the fight straight to Seo-jin, who knows what will happen next week!