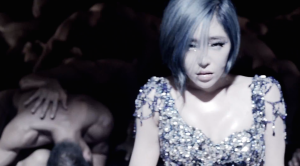 Ga-in is an artist that doesn’t just push boundaries – she hurdles over them with her overt sexuality and overwhelming confidence. Love her or hate her, whenever she puts forward a new release, it’s guaranteed that people will be talking about it — and at least one network will make her modify the choreography. Her latest music video, “Paradise Lost” is no exception.

For her eighth solo album, Hawwah (‘Eve’ in Hebrew), Gain has decided to embody the biblical Eve and her journey from temptation to banishment from the Garden of Eden. The lead track, “Paradise Lost” does not morn the loss of the Garden of Eden, rather, it critiques the way in which pleasure and sexuality are constrained. The Garden of Eden is not the lost paradise, instead free will and perhaps Ga-in herself are.

Both the video and the song are heavy with biblical metaphor. So much so, that initially the content of the MV is overwhelming — especially with Ga-in slithering around on the floor in a leotard. Thankfully both the song and the music video follow a chronological sequence of development from shame and secrecy to rejection and pleasure. 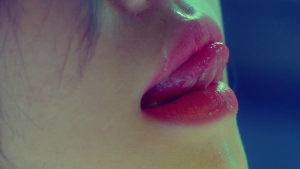 The video opens with a shot of a neon sign for “Paradise Lost,” that is reminiscent of a red light district. However, once the ominous organs of the intro begin, the camera cuts to what appears to be the interior of a church complete with royal blue floors, an organ and a snake. As the snake begins to slither along the church banisters, Ga-in herself lounges on the stairs in a white-lace snake get-up of her own.

The opening moans of “please” set the tone for the track. Ga-in begs someone to turn off the lights, so that they can be concealed in darkness. She then begins to reference someone’s dreams of her, she consoles them and tells them that they can lie about what they do in the darkness, that they have done nothing wrong, while the echo pleads “let me do it.” These simple opening lines set the stage for the contrast between desires and the false need to conceal them. 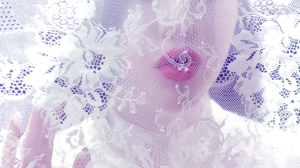 This motif is further conveyed through the mesmerizing cuts between Ga-in hidden behind a curtain of white lace and her dancing on the floor in all black. There is the image of purity — the deceptive image — and the reality of her and her audience’s desires. Ga-in in these scenes is disguising herself as something innocent, propped on a swing, waiting in a hallway in her white gown.  She is convincing in her innocence through her hypnotic vocals that play against the backing track and pull the listener away from their inhibitions and into her world.

It is once the listener has been lured into her seductive world that she begins her proposition in the form of the dark chorus:

Anyone looking for the Paradise Lost

Maybe I’m that, your diamond lost

Something good you want crazily

This line could serve as yet another biblical reference to the long desired “land of milk and honey” which was promised to Moses as a form of redemption. Ga-in challenges this notion of redemption and instead offers herself as something to be taken, that perhaps she — in all her sexual glory — is the “diamond lost.” She doesn’t say she herself is the biblical paradise, but rather that she is “sweet like honey” and “almost paradise” in her realness. She’s pulling the listener away from the biblical desire of paradise — one accompanied by purity and repressed desires — and instead is offering a very real alternative in the form of herself and, well, sex. This sentiment is echoed in the line “you and I, another paradise.”

Ironically, honey is also referenced in the bible as something to be eaten “when [one] knows how to refuse evil and choose the good.” (Isaiah 7:15). Whether Ga-in’s intentions are benevolent or malevolent is up for debate. What is clear is that she, as Eve, advocates free will and the pursuit of desire, rather than its restraint. 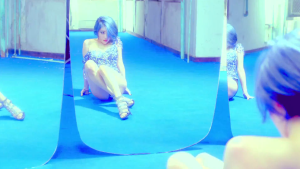 At the beginning of the second verse, Ga-in’s seduction takes a new turn. Now that she has lured the object of her affections in, she goes against her initial request and asks for the lights to be turned on so that she can be fully viewed. As Ga-in slithers around the sets, it becomes apparent that she and snake are one. She warns her listener not to listen to the “lies” that are told, and instead to only follow her voice. Let her guide them into the paradise that she can be.

One of the most striking elements of the MV are the cuts of Ga-in dancing for herself in the mirror.  The over-exposed and saturated blue room sets the stage for Ga-in’s self realizations as she takes in her own body in the mirror. These cuts are also important because they illustrate Ga-in enjoying her own sexuality for herself — free of the male gaze. In such cuts, Ga-in proclaims “I feel, I’m real,” as she revels in her own sexual power. Ga-in is no stranger to the depiction of sexual discovery as, both “Bloom” and her most recent MV “Apple” convey similar concepts of sexual liberation.

It is the high contrast dance breakdown following the second chorus that serves as both the climax of the song and MV. This bridge segment begins with Ga-in speaking in English over the chords of an organ:

They’re making up another fantasy

In these lines, Ga-in not only challenges the religious notion of purity, she goes so far as to call it a “fantasy.” This fantasy of paradise is contrasted by her continued proclamations of “I’m real” and “I’m here.” 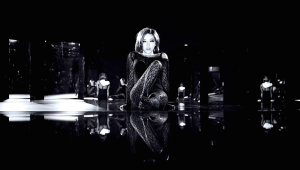 The choreography in this sequence is impressive in it’s overt yet subversive sexuality. Once again, Ga-in is surrounded by mirrors. Only this time her attention is diverted away from herself and towards the camera and the audience. The black space itself feels much more constrained that the previous sets, as if both she and the audience are trapped in this eerie hall of mirrors. As she slithers and gyrates in a series of dance combinations this author is incapable of properly describing, it’s hard to tell if she is reveling in her own sexuality or trying to escape the condemnation that surrounds her.

After the dramatic bridge, the video returns to color as Ga-in dances through the final chorus. The scenes cut quickly between her dancing in all black and all white until the screen splits and the upper shot is Ga-in in white while the reflection is her in black. This imagery plays into both the idea of a choice between good and evil, but also of the deceptive image of purity and it’s true reflection. Ga-in proclaims that there is no need for the lies of religion anymore when the two lovers can exact their free will and belong to one another.

In the final cuts, Ga-in is pictured sitting on the floor as a hoard of naked men crawl towards her. It appears her seduction has been successful, yet she still remains untouchable to these pitiful men. This imagery plays on the fact that while Eve was the first woman to give into the temptation of the serpent, she was also the first woman to exact her own free will and, in turn, lead man away from from the Garden of Eden. Eve and now Ga-in, in many respects, are the untouchable manifestation of enacted desire. 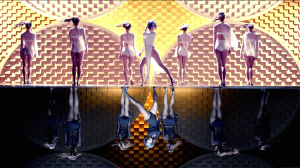 By the conclusion of the song, Ga-in has tempted the listener beyond return to the point where her own deception is almost overlooked. Instead of the snake being charmed, Ga-in is the serpent who has successfully tempted the listener. She began her temptation with invitations under the pretense of secrecy, lulling the listener into complacency with reassurances that it’s okay. However, once the listener had fallen within the trap she turned the lights on so that they could look at only her. She then turned the listener away from the lies that bind them and instead urged them to follow her voice. At this point, we’ve become trapped — but who needs a fantasy of paradise when you can have a very real version of paradise through free will?

Ga-in’s producer, Cho Young-chul summed it up best with:

In Eve’s story, it’s not that humans have passive existence only operating by God’s instruction. Isn’t it that we have meaning of existence by having the free will to choose our own lives?

Wasn’t Eve an amazing woman who rejected the heaven told to her by others and carved out her own life? Was the snake not a real snake but a symbol of her own inner raw desire? Wasn’t Eve a woman so tempting she shook God’s son Adam?

In conclusion, Ga-in’s “Paradise Lost” isn’t just good, it’s really good and, above all, smart. It’s the kind of concept that I cannot imagine any other current artist in the K-pop world being able to pull off. Everything from the art direction, to the choreography, to Ga-in’s delivery of the vocals tells a story of desire so tempting you can’t help but fall into it head first. K-pop needs artists like Ga-in who are able to put forth not only confidently sexual concepts, but concepts with meaning behind them. With the addition of the blatant social and religious critique, Ga-in and her team deserve a round of applause for conceiving and executing such an intelligently provocative concept.

Readers, what did you think of “Paradise Lost”? What are your interpretations of the track and MV?