Ga-In Does A Little More Than Bloom In This MV

Son Ga-In, maknae of the famed female quartet Brown Eye Girls and my favorite diva in K-pop, recently made a comeback with her second solo album Talk About S. At the head of this solo endeavor is the title track “Bloom,” which came hand in hand with an artistic and yet somewhat controversial music video that has pretty much had me crying from perfection and the MOGEF raging from shock.

Ga-In, to me, has always been the coy and quiet member of BEG. But don’t let her demure facade deceive you–this girl is feisty and fierce, and she spares us none of her talent for “Bloom.”

This MV took me a few days to really digest. At first glance, nearly everything is a confusing six minutes. Here is basically a play-by-play of my first impressions: Why is she blonde, why is she wearing her sweater like this is an old 80’s rom-com movie, wait is she Goldilocks or something I don’t get it, wait is she wearing a turtleneck with a denim ensemble, whoa wait she looks stunning, oh here’s the MV……lol CGI,…WAIT IS SHE TOUCHING HERSELF…..oh look lambs and flowers, she must be a virgin HOLD THE PHONE THIS IS A SEX SCENE oh okay back to dancing in the field of flowers or whatever. Damn this artistic perfection. Flawless girl bias is still flawless.

And I’m sure many first impressions (apart from my fangirl flailing at the end) were very much along the same lines. Needless to say, the shy, virginal innocence portrayed in the intro of the MV completely sets us up to be greatly surprised when the MV in fact starts and Ga-In lies naked in bed, dreaming of a flirty lover (or at least, his hand beneath a table at a restaurant). 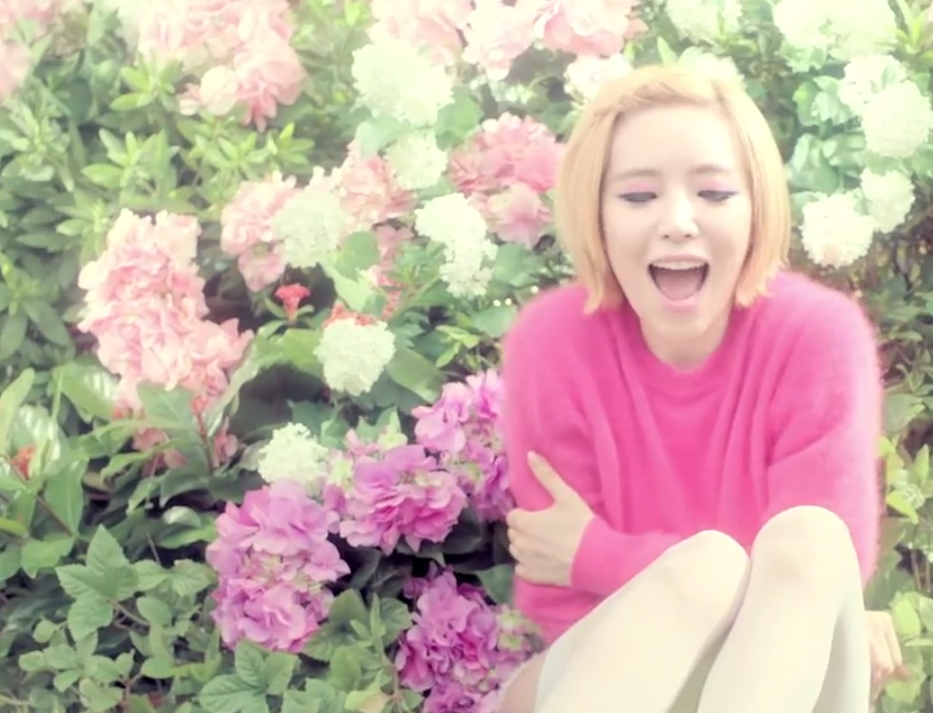 When the song began with the verse “You know, I am a flower yet to bloom,” I immediately thought of the notion that women are often viewed as delicate flowers and their first foray into sexual relations as the act of ‘deflowering.’ Now I’m not sure how much this same metaphor is held up in the eyes of the Korean culture, but I thought the play on the word was a clever way of instantly setting a tone. And, regardless of cultural or even metaphorical context, the main idea is obvious.

Before we get into that though, let’s talk dynamics. I am totally in love with the color palette for this MV. The choreography opens with a simple set–a pastel backdrop that is furnished just enough to accommodate the dramatic choreography. What I loved about these scenes was the way Ga-In’s blonde locks and her red sweater and the mint green walls all tied together. It was very in-ornate but surprisingly very striking. Where we do find the extravagant and the ornate, however, is in the latter half of the MV. The move to the outdoors, bursting with flowers (oh look they’re blooming too…) and magic and two random but adorable sheep, allow the MV to take on a fantasy-like aspect. We are overwhelmed with pinks and purples and intoxicated by the sweetness. With Ga-In dressed almost like a princess in pin-up, here is where not only the song climaxes, but so does the story unfolding before us.

Overall, the sets used are decorated to facilitate progression of Ga-In’s story as well as to emphasize and even celebrate the feminine tones to the aesthetic and the song. As far as cinematography is concerned, this MV is a solid ten in my book. 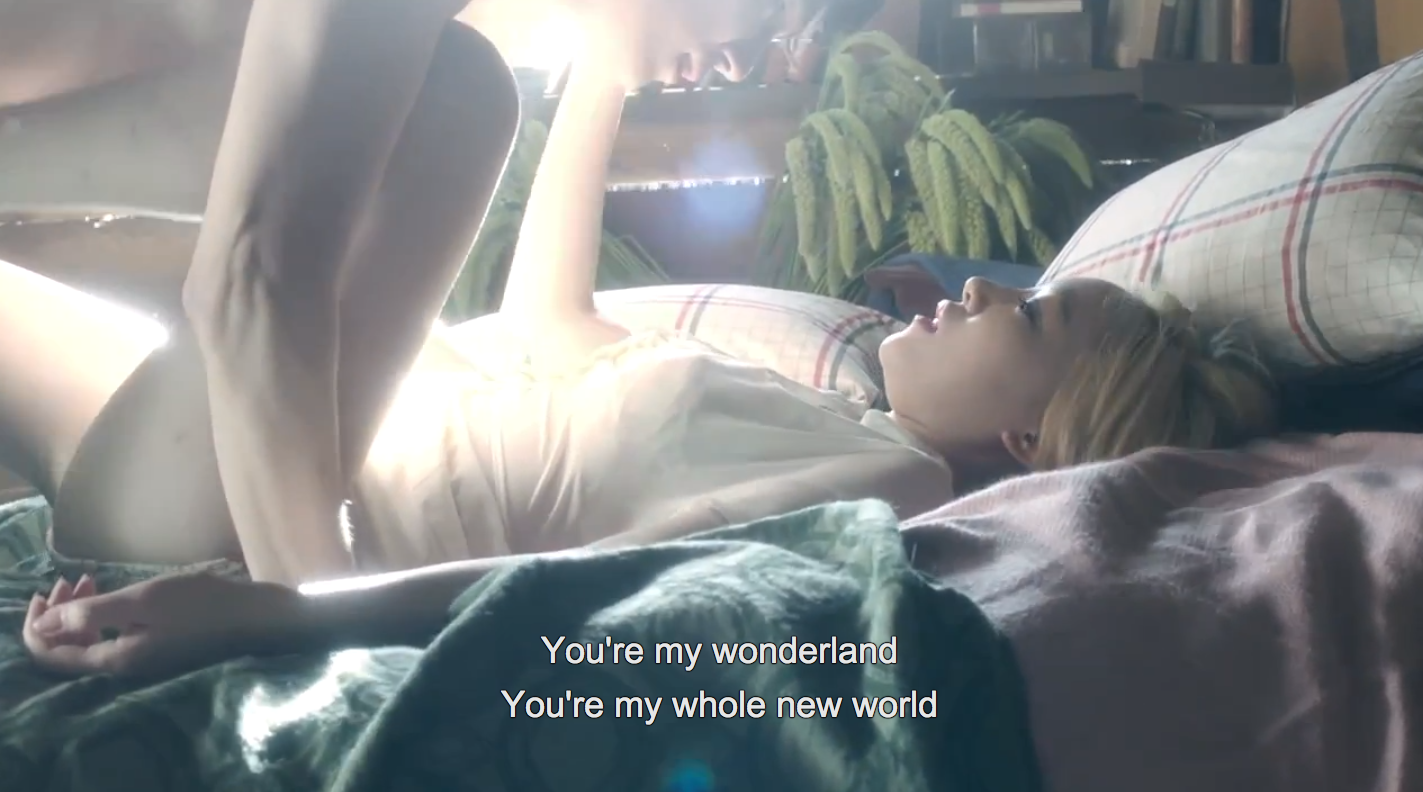 Now onto what has made a lot of people uncomfortable: the sexual undertones that are a lot louder than what K-pop is used to. Now some have been quick to mar Ga-In as classless, distasteful, or, in short, having gone too far. And here is where I have to disagree. What Ga-In has done here is taken the trite concept of falling in love and colored it in a new, very realistic way. By placing the image of the cute innocent girl into the genuine circumstances of falling in love, which include not only the endearing and the beautiful but also the tense and the physical, we are presented with what is actually a rounded illustration of what it means to be in love, what it means to actually feel love. Ga-In basically says everything about love that the rest of our K-pop princesses often leave out.

Ga-In is also able to highlight the magic and the excitement of this feeling through her character while at the same time estrange any idea that what this is (touching herself, having sex) is sinful or wicked. In some ways, she has mastered supplanting K-pop’s pretty girl from her usual domain of precious and incorruptible into the actual context of love and what is entails to be in love. Ga-In doesn’t flirt with the message behind her lyrics–she straight up delivers it to you. And that much I can appreciate as real artistry. I don’t want to call Ga-In an innovator, but she has done here is exceedingly clever and still very beautiful.

One Youtube viewer summed it up fairly nicely by saying this.

Brave girl indeed. But that’s something we’ve always been able to expect from Ga-In–a heaping dose of real.

By now, I’ve had “Bloom” on repeat for about an hour, and yet I haven’t tired from it. I’m absolutely crazy about the persona Ga-In has adopted in “Bloom,” and the song itself is fun and retro in all the right ways. It’s great to have Ga-In back doing her own thing again–“Bloom” so far has made for a stellar comeback. And before you go about bashing Ga-In for this gutsy MV, take another look and see if you can’t find the reality in this fantasy.