Side B: 50 Tones of Tohoshinki 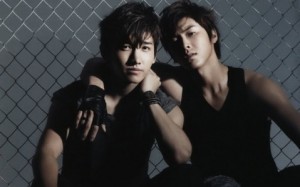 The Rising Gods of the East are back with their 6th studio album Catch Me and while this slice of the pie has been getting mixed reviews all over the fanspace, one general point of consensus is that Catch Me has taken a shade or two from their Japanese-language corpus, especially from their 5th Japanese studio album Tone. For this very reason, listening to Catch Me has gotten me to listen to a lot of  Tone recently and while I never thought much of the latter when it first came out, giving this album another gander opened my ears to some of the sleeper hits on this album. So, without further ado, here is this week’s Side B!

While this song introduces the album to follow, in many ways, this is a bit of a wildcard on this tracklist. With a soft orchestra accompanying the duo’s voices, sans the autotune and overlays that are typical of pop, this song is like a butterfly blossoming in my heart. Flowing and unfolding like a simple but pretty waltz, the lyrics are pure poetry, weaving color and nature together in order to create a vivid, beautiful image that is just as vivacious and beautiful as this track. It’s definitely—and ironically—a dark horse on this album, in their repertoire of work, and really, anything being done mainstream, but this short and sweet track is definitely a winner in my book. For those of you who dream of fairy princesses with pink sugar cupcakes and unicorns hauling dreams and wishes, this is a song for you.

With its metallic synths and gritty textures, this song is exemplary of this album. For those of you who are into that, then here you go, another song to rock your socks. Another added bonus of this song however, is Changmin’s voice. While we never got much of an opportunity to hear Changmin sing within his lower range before shit hit the fan but afterwards? Yeah, okay, the sky is falling. But in this track, we hear quite a bit. Low, deep, and incredibly sexy, Changmin is all over the place and for those of you who are into that, well, go forth and prosper with this track. While the chorus and bridge are frackin’ all over the place, the verses are legit, both vocally and instrumentally. Good things peeps, good things.

Any song that can incorporate pop with an orchestra is a winner in my book and this track is no exception. But the highlight of this song is the piano melody working against their voices. It makes for tension that is reconciled during the chorus but never gives up completely, something that musically reflects the sentiment of hurting. And of course, those harmonies. Regardless of the number of members in this group, these betches know how to harmonize and on this track, they do it only when necessary and beautifully. Especially Yunho with those bass lines. And the ending. At this point, I just have no words to describe how gripping this song is but if you’re having a bad day, this song is a hug from Yunho and Changmin to you, with the wish that you’ll feel better.

“シアワセ色の花” (Flowers with the Color of Happiness)

This track is: beautiful. Natural voices, simple rhythms, and sweet harmonies–for such an uncomplicated track, this track sure does inspire some complicated feelings. The vocals are flawless, especially Yunho with his smooth, rich voice and base line harmonies that is completely devoid of the nasal, whiny quality it possesses in others. And this track makes the interesting choice of giving the vocalists a break and letting the music do its own magic. A sweet addition that reminds that when we listen to this group, we’re not listening to a bunch of entertainers or performers–we’re listening to music. And though it may be almost 7 minutes long and definitely takes its sweet time, this is a track that goes by so quickly, you wish there was more by the time you get to the end.

This track is complicated. Originally a DB5K track, on the Tone album, the track is brought to you, not by 5 members, but by the current 2. It definitely invites comparisons and there’s no point in avoiding it. For better or for worse, any future of discussion of DBSK will invite comparisons between what DBSK was and what DBSK is now. But here’s a comparison that may surprise you: I prefer this version. Maybe it’s a matter of remastering the track, maybe it’s a matter of better technology–but the harmonies are so much crisper, so much more clear on this track, especially Yunho’s bass line and that adds a richness to the track that was definitely lacking before.

Comparing the two albums, while Catch Me the single, shares a resemblance to tracks like “Superstar,” “I Think U Know,” and “B.U.T.,” beyond that, Tone is an album that stands very much on its own. The sounds definitely aren’t for everyone–especially the lead singles with their edgy grind and sharp flavors. But the album has tracks that are different from these singles and different from stuff that they’ve done before. If you’ve been listening to Catch Me recently and want to know what all the Tone talk is about, check this album out, again if you’ve done so already. I guarantee some surprises.