Ga-in Has Some Secrets To Tell

Yes, the title of the solo album of Brown Eyed Girls’ Ga-in, Talk About S, stands for Talk About Secrets, and not sex, like the MV for “Bloom”, led some to conclude. 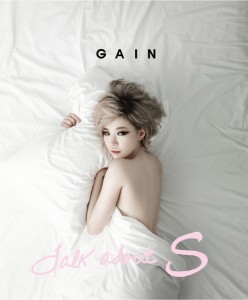 Nonetheless, Ga-in has finally come back with her second solo album, which had been set to be released in late August but ended up being pushed back until October.

As much as the wait has been killing me, LOEN Entertainment has engineered a unique building up of the release with teasers made for each song on the mini-album. Each teaser had it’s own concept to go with the title of each song which led one to believe that Talk About S was going to be a myriad of styles. I, for one, had been anticipating a contrast to her debut solo album, Step 2/4, which had one overarching style, Latin-inspired music. Anyhow, it’ll be interesting to see what other styles Ga-in will experiment with in Talk About S. Step 2/4 was a very well-done solo album, and that gave me raised expectations for her second effort. Also, accounting for the shift from Nega Network to LOEN Entertainment, this review will take a look at the differences (or lack thereof) regarding the switch.

The first song on the mini-album is “Tinkerbell” which sounds very house-inspired. It sounds French-inspired and comes with the type of synths typical to the genre. This is especially apparent where guitar riffs come into play. Although I would’ve associated “Tinkerbell” with a very sweet-sounding song, Ga-in’s high notes give a more whimsical feel. She shifts from high to low notes, with her breathy voice. There’s also a particularly sensual feel to it, especially at the chorus. In a way, the sweeter aspects of the song present “Tinkerbell’s” complexities. Imagery is easily related to the famous fairy character from Disney’s Peter Pan, who in the animation seemed very innocent due to her stature, but was also subtly provocative with her shapely silhouette.

The second song on the mini is “Tiredness”. With a lovely piano build-up as the intro, Ga-in’s sultry singing leads in to the song with cymbals crashing, and everything culminates in a lounge-style tone. It sounds much more sensual and less light than “Tinkerbell” and has a lot more bite and bombast, exactly what I adore about Ga-in’s songs. The track struck an image of Ga-in in my mind, of her in a black dress and a bob cut, singing in a bar/club accompanied by a piano and some brass instruments. This one is definitely one of my favourites off of Talk About S.

The third song, “Bloom,” is her promotional track and my least favourite song on the mini. Although I find Ga-in to have a wide vocal range, which is often expressed in her higher notes, she always sounds nasally, and I’ve never been very fond of nasally-sounding voices. “Bloom” is full of high notes that I don’t think Ga-in should attempt. As a song, it also sounds very disjointed in the way that she maneuvers from low to high notes. It has a distinct 80s-sound with the guitar riffs, but that is until the melody reaches its theatrical chorus with soaring high notes, and these are just completely nasal. Just a tidbit of information, “Bloom” was produced by the same person who created IU‘s monster hit “Good Day”, and on that alone, there were evidently elements of IU’s song in Ga-in’s title track. While that’s well and good, I felt an overall mismatch between this and Ga-in. My dislike for soaring choruses aside, I really am not particularly fond of artists stretching their vocals in order to make their voices work within songs. It was all very mind-numbing, and nasally to the point that I was looking forward to the end. Coming from me, I’d say this is a disappointing promotional track.

Next is “The Gaze,” a song that I think is the best of the lot, and also what I wager “Tinkerbell” would have sounded like if it was a lot more refined. When compared to “Tiredness”, it definitely sounds more lounge-y, and just as well, it takes this theme of sensuality to a whole new level. I like the steady pacing of the song and the fact that it has a lot of that electronica-meets-jazz vibe and charisma. The inclusion of Yoon Jong-shin made the song a lot more richer and much fuller. In spite of its slow rhythm, it is a multifaceted song that seems sleepy but adheres to different styles. Just like a pairing of a piano and an accordion, “The Gaze” makes for a complex and pleasurable listen.

“Catch Me If You Can” is the last song on the album. As if to defy its place as “lucky last”, it adds to the mix as an obnoxious song. I never thought I’d see the day that Ga-in and obnoxious could be placed in the same sentence. Unfortunately, it’s not obnoxious in a good way — the track is way too upbeat and cutesy for Ga-in. Again, coming off her first solo offering, she’s better suited to meolodies with depth and dashes of angst. There are a few redeeming qualities to the song but Ga-in’s vocal crescendos only manage to sound whiny and sugared-up. In all honesty, I can’t quite imagine any of the Brown Eyed Girls stooping to the level of cutesy pop, so this might be, next to “Bloom” the most disappointing and trite track on the mini-album.

I expected a lot more from Ga-in’s second solo effort, and despite having enjoyed “Tiredness” and “The Gaze,” the other songs ranged from okay to downright intolerable. The album as a whole seems lacking in terms of cohesiveness. There was a lot more processing and vocal alteration than I would have liked in a Ga-in album. The songs may grow on me, but for now, this hasn’t been satisfying.