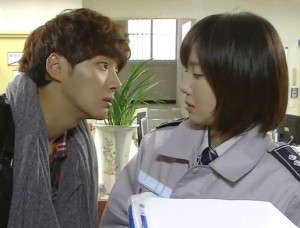 A year late with my sincere applause, I felt the need to talk about this drama due to many reasons: for one, I am not very fond of dramas and it’s rare for me to find one that can defy my reflex of fast-forwarding; secondly, it had moments when I genuinely laughed; thirdly, the characters weren’t stereotypical or overreacting that much. But most of all, it tackles a rather difficult subject: depression.

Beware of the spoilers ahead of you!

Bong-sun is an unappreciated, cynical and difficult police officer; the first thing we learn about her is that she didn’t get the promotion she was after. She protests against this measure, only to find herself being sent to psychological counseling. As in many dramas, Bong-sun will meet several times her future boyfriend and will form with him the typical love-hate relationship. Yoon Si-yoon plays Jae-hee, a rich guy that keeps a low profile and works as a park attendant at the company he co-founded with Hwa-young without anyone suspecting him. The drama, in terms of plot, has a regular setting: family conflicts, the traumatic experience that should add depth to the characters, the crazy chick as a female antagonist, the random “beanpaste girl” to contrast with the protagonist and the good guy, Ma-roo (played by Beast’s Kikwang), talking with one’s self and sometimes ridiculous scenarios. Mainly, most of the things that set me off in a K-drama. So what’s different? I Am a Flower Too may be framed the same as many other dramas, but the picture is different.

Bong-sun is cynical, pessimistic and lacks empathy in most cases. She boxes up her feelings of discontentment because she has no one to turn to who can listen to her. Her job causes her even more frustrations. The character deals with the requests of a family that turned its back on her and she gets the short end of the stick — she fosters the daughter of her mother’s lover, for whom the woman left her family; at work, her superiors force her to bow down when a wealthy person is disrespectful, having a pretty good taste of what injustice feels like. Always grumpy, her colleagues don’t tolerate her and she ends up going through a vicious cycle: the disrespect she endures provokes her into a constant bad mood, which ends up turning people off and then making them hate her guts. Bong-sun, from the very beginning, is bound to explode any second. 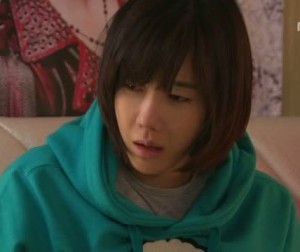 But she doesn’t. Although she has many breakdowns where she tells people how they’re ignorant morons who should see for themselves how full of s**t they are, she never wins an argument, but instead feels repeatedly humiliated. The actions that should bring her redemption result further in demeaning her. Bong-sun doesn’t explode, she implodes because of her powerlessness. Bouts of crying, passive-aggressive reactions and dry humor represent her daily routine. The answer for the writers never consists in letting the anger out. Bong-sun locks herself due to her constant state of displeasure and lets anger eat her out. The only way she can beat it is experiencing emotions again: loving and accepting love.

This is where Jae-hee kicks in. He carries heavy baggage himself: family deaths and a tragic accident traumatize him. He has a social phobia and wants to direct everything in his enterprise by staying in the dark. Bong-sun and Jae-hee’s relationship will be one of symbiosis: the girl learns to express her feelings while the boy learns to let someone in and finally deal with what has been left unresolved. The best part in Jae-hee is his non-jerk attitude. Indeed, both characters have their flaws and his actions occasionally look asshole-ish, but it’s not in the important aspects. You know how in dramas there’s always a reacher and a settler? The way the drama plays their qualities and quirks results in a balanced relationship which appears endearing and incredibly sweet.

The episodes have us watch the characters grow and this is not only for the protagonists, but also Dal, Tae-hwa and Hwa-young. Dal is in the beginning, a ruthless materialistic girl who plays dirty, but decides to do the right thing in the end and learns from Tae-hwa to raise her middle finger at anyone commenting about her. Hwa-young doesn’t necessarily develop, but realizes she needs help, being trapped in what happened years ago. 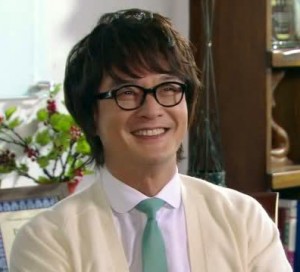 Depression and suicide have got South Korea enduring an endless struggle. Around 40 South Koreans commit suicide every day. Seeking mental health counseling is associated, as in many other countries, with being nuts. Some clients simply ask for pills and refuse to seek psychological help for a second session. In these conditions, I Am a Flower Too is daring. Irregular sleeping and eating habits, guilt, self-loathing, irritability, low interest for any kind of activity, almost no self-esteem are some symptoms well tackled in the drama. The imaginary fling she often lives with, Pink Chicken, besides contributing to this drama’s humor, proves her need to take refuge in another reality, where she receives and gives the love she doesn’t get in real life. Her job, identical with her father’s, speaks of her abandonment issues.

Her grey lifestyle, lost in the routine of a day yet to come, looks unlivable. She hardly feels joy, and the interminable string of frustrations makes the watcher think of suicide even before the main character contemplates it. Oddly enough, she hardly mentions it too. The professional help she gets appears highly unprofessional (why would you tell depressed persons they aren’t normal? Why don’t you hand them a noose instead?). But it pushes her out of her shell and gives her the determination to accept her problem. What the drama does is suggesting she needs to get out of this by changing her perception and way of handling problems, not the others. She needs to be apt to confront them and move on, more than inertly laying on the ground and complaining.

The situations, mainly the ones that happen to her, are somewhat realistic. Examples are, police dealing with drunkards, lost kids and minor cases, bribery, friendships and connections assuring someone’s job and relations in the work field replacing the plastic version of it, high-profile murders, mobs and unrealistic dialogue. Bong-su and Ma-roo’s bonding is adorable and I loved their discussions in the beginning with her sarcastic comments and snarky attitude, and conversely, his looks of disorientation and innocence. Then of course, this is resolved when he manages to get back at her after.

I appreciate the entangled narrative plots, where everyone seems connected to each other. It kept the number of characters to a minimum and moved the plot along. The moments between the two were fun to watch, silly and believable to some extent. Bong-su hates that he never told her of his position, feeling betrayed after reconciling with their different social statuses. She isn’t much of a Cinderella and doesn’t believe this makes her unworthy of him.

And what else can I say? It was a pleasant watch, it featured lovable characters and managed to escape the repetitiveness by appealing to both those who want the average K-drama, as well as to those in search of something different. I don’t want to trick you into thinking it’s revolutionary and outstanding, but I can wholeheartedly say it was worth my time. The dramatic sequences were emotionally challenging from my perspective and the episodes had the sugar and spice they needed. If you have some time, I strongly recommend it.

So what do you think? Have you watched it before? What other dramas deal with the same subject?