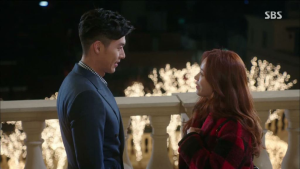 After a good start, Hyde, Jekyll, and I continues to entertain and fulfill some of my Korean drama wishes. In episodes three and four, we learn more about Seo-jin’s disorder, which is important for establishing what Robin can and cannot do. One important thing is that now Robin can take over even when Seo-jin’s heart rate is low. However, Robin cannot appear on his own; someone else has to need him first. Seo-jin also set up a series of protocols in case Robin came back which, so far, Robin has to follow. The most important is Protocol 19: Robin will be destroyed once there’s no reason for his existence.

Goo Seo-jin’s (Hyun Bin, Secret Garden) luck continues to go sour in these next episodes. We learn that Jang Ha-na (Han Ji Min, Rooftop Prince) was the person who triggered his disorder in the first place and that she’s the reason Robin has made a comeback. And yet Seo-jin can’t get rid of her because he needs Ha-na to find Dr. Kang (Shin Eun-Jung, Misaeng). So Seo-jin is torn between keeping Ha-na around, which could trigger Robin, and kicking her out, which could mean Dr. Kang will never be found. We also learn that the kidnapper is a patient and is well-known at the hospital where Dr. Kang works. He is working with at least one other person who knows Seo-jin, but the reason remains a mystery. In these episodes we also briefly meet a new character who knows Robin, Min Woo-jung (Hyeri, Girl’s Day). Apparently Robin is a webtoon artist, perhaps a reference to the webtoon that inspired this series. 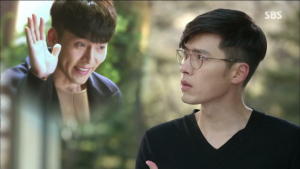 This is the first time we really get to meet Robin, who everyone fears so much. Robin, like Seo-jin, sees himself as separate from his “twin.” He never refers to himself as Seo-jin’s better half or anything to suggest that he’s a part of Seo-jin. Although they share childhood memories, he says Seo-jin tried to kill himself and that was the day he was born. And ever since the split, what Seo-jin knows and experiences, Robin doesn’t and vice versa. So the real question is: should we think of Robin as a part of Seo-jin, a slice of his true personality, or something else?

For everyone around Seo-jin the answer is clear: Robin is not a person or even a piece of Seo-jin that needs to be re-integrated. Despite Robin’s happy personality, he’s terribly lonely underneath the smiles and messy hair. Seo-jin’s family completely rejects him; he is especially hurt when Seo-jin’s mother doesn’t greet him. Only secretary Kwon Young-chan (Lee Seung-jun, Misaeng) shows Robin any affection, even saying he is like a little brother. This is why Ha-na’s relationship with him is that much more precious. Not only did she accidentally create him and bring him back after five years, she sees him as a person. For Robin she’s one of the few people who sees him as someone, not something. His relationship with Ha-na certainly complicates things. If he falls in love with her, how can he stay when Seo-jin is determined to get rid of him? Being seen as a person is already changing Robin, who ends up not only re-hiring the circus troupe but also putting Ha-na in Seo-jin’s house. As Seo-jin says in the last scenes, it’s the first time Robin has ever apologized for anything. 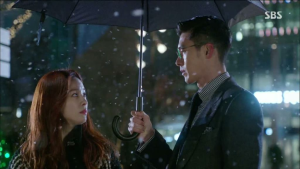 But Ha-na’s influence is also slowly changing Seo-jin, although it’s too early to call it love. He knows that Ha-na triggered his disorder, but she was also able to calm him down during one of his attacks. Despite resenting her for being his trigger, Seo-jin, not Robin, actually saves Ha-na from being run over. It seems the walls he has spent five years building to stay in control are slowly starting to crumble.

Whatever did happen five years ago is becoming more and more important for explaining why Seo-jin hates Robin. We learn that Robin was helping people in an accident but someone ended up getting hurt. From the way everyone talks about it, it seems that at least one person died. Seo-jin blames himself even though he had no control over it. To make matters worse, Robin doesn’t even know what happened. Robin’s self-esteem is largely based on him feeling that he’s the “good guy,” so it’s unclear how he’d react if he knew someone was hurt because of him. His personality could change for the worse if the guilt is too much for him.

The series is doing so many things right that I can forgive the whimsical rope rescue Ha-na does. For one, it’s the first Korean drama I’ve seen where the female protagonist rejects the jerk and falls in love with the nice guy! She goes head-to-head with Seo-jin instead of backing down (let’s not forget that she used Dr. Kang’s disappearance and possible murder to force Seo-jin’s hand). She definitely is ambitious, but she does not stop being kind. What’s different from other nice female characters, however, is that she isn’t naïve. She doesn’t help Seo-jin because she sees some hint of goodness underneath the insults and manhandling; she does it because it’s simply her personality. She continues to keep her distance from Seo-jin instead of falling in love. It’s a welcome change from other dramas whose downright abusive male leads become the love interest. 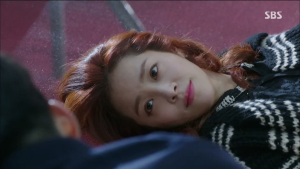 The writing decision to make Ha-na believe Seo-jin has a twin, rather than having her learn about his disorder, was a good one. The female lead falls for the guy who treats her well; she’s not a woman who, once again, endures endless abuse hoping that the man will change. For now, Ha-na can focus on liking Robin and building a relationship instead of trying to save Seo-jin. The drama also got the past connection mystery out of the way early, so the characters can concentrate on the future.

The series does a good job of keeping what’s at stake for Seo-jin at the forefront; otherwise the viewers might wish the director would just go away. Another director, Ryu Seung-yeon (Han Sang-Jin, Birth of a Beauty), is already scheming to take over Wonderland. Seo-jin’s father keeps showing up, pressuring Seo-jin to leave for the United States. It’s also interesting that even when Robin is out, Seo-jin’s presence hangs around like some sort of ghost. From security cameras planted all around the house to a GPS tracking device in his clothing, Seo-jin’s desperate fight for control is always felt. Overall the series is doing a good job of developing characters and new and interesting conflicts. It’s hard to predict what will happen next, but it will be fun to watch!