Hyde, Jekyll, and I Ep. 1-2: Gorillas and Hypnosis 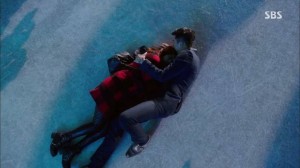 Are people Jekyll, Hyde, or a of little both? Hyun Bin (Secret Garden) and Han Ji Min (Rooftop Prince) try to answer this question in their new drama Hyde, Jekyll, and I (하이드 지킬, 나).

Hyun Bin plays Goo Seo-jin, the icy director and heir to Wonderland. He’ll do anything to control his world, from never letting others touch him to spontaneously banning balloons. Despite being the director of an amusement park, Seo-jin doesn’t allow himself to feel happiness, fear, or any extreme emotion; it’s simply too dangerous. From his crisp suits to his heart monitoring device, everything about Seo-jin is pre-planned in a futile attempt to control chaos. The one person who could ruin it all is Robin, Seo-jin’s secret alter-ego.

Enter Jang Ha-na (Han Ji Min), the confident and fearless leader of Wonderland’s circus show. Instead of trying to control everything, she simply learns and adapts along the way. She arrives in Wonderland just in time to save the crowd from an escaped gorilla. But her heroics don’t stop Seo-jin from unceremoniously terminating the circus group’s contract. Determined to save their jobs, Ha-na follows Seo-jin to the hospital. Seo-jin’s psychiatrist, Dr. Kang Hee-ae (Shin Eun-Jung, Misaeng), says she has found a way to destroy Robin once and for all. But a mysterious man attacks Dr. Kang, and Ha-na becomes the sole witness. Unfortunately, Ha-na cannot remember everything about the attacker. So Seo-jin is forced to do what he hasn’t done in years: reach out and protect someone else. Whether he likes it or not, within Ha-na is the only clue to finding Dr. Kang and the cure for Robin. 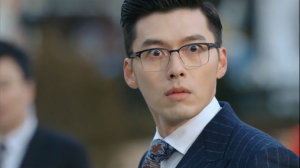 The series is already set up for some interesting conflicts and questions. The personality swap happens when Seo-jin’s heart rate reaches 150 beats per minute, and we know that Robin was born out of a sense of guilt. But Seo-jin is adamant that Robin is nothing like him, even the name “Robin” is not Korean, further emphasizing his foreignness. Robin hurls himself into danger to rescue others; Seo-jin thinks nothing of biting and pushing you to the ground to save himself. And yet, despite this noble quality everyone whips out tasers if they suspect Robin has returned.

We don’t know too much about Robin yet, so it’s difficult to say who is Hyde and who is Jekyll. Even though Seo-jin is a bit cruel and selfish, he’s by no means the murderous, immoral creature found in The Strange Case of Doctor Jekyll and Mr. Hyde. Like Dr. Jeykll, the director is not completely good or bad. He’s mean, but he definitely does care about himself and his family. He has people who genuinely care about him too, such as Dr. Kang and his assistant Kwon Young-chan (Lee Seung-jun, Misaeng). His prickly personality is also not some cheap plot device; Seo-jin is simply doing everything in his power to keep Robin from taking over. He’s trapped within his own mind, knowing that one misstep, one surge of love, one moment of fear, means that he could lose everything. His birthright? Gone. His self-control? Gone. His mind itself? Gone. 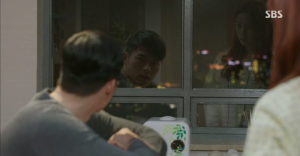 What could be more terrifying than losing yourself? Seo-jin has completely shut himself off from the world in a last ditch effort to keep his mind his own. So although people are quick to label him Hyde, Seo-jin is much more sympathetic. Perhaps Robin is the “bad side.” There’s no guarantee that this Robin personality is completely good; all we know is that he saves people. If Robin really was so great, Seo-jin wouldn’t have a team of men to zap him, and people wouldn’t look terrified when they suspect Robin has taken over.

Helping others is good, but when taken to extremes it can be self-detrimental. Good people might blindly trust others, get taken advantage of, or try to rescue people who, frankly, don’t want to be saved. All of this leaves you open to emotional trauma, and Robin’s personality could change if something devastating happened to him. Plus, who knows? Robin could spend the company’s profits on a charity and end up bankrupting the whole business, costing everyone their jobs. Even good people with good intentions can end up doing terrible things.

But there are plenty of other mysteries to be solved, such as what past connection does Seo-jin have with Ha-na that would account for her Bella-like effect on him?

Where did Robin learn so much parkour?

Or why is this assassin so terrible at murdering Ha-na (seriously, how long was that choke scene)?

So far the series is better than I thought it would be because it’s not completely predictable. I had no idea the doctor was going to be murdered (?) or that Seo-jin would superman dive off the roof. The water scene was beautiful to look at, even though I was wondering how the unconscious Ha-na knew to hold her breath. Hyde, Jekyll, and I is nevertheless pretty entertaining and a good drama to start the new year with.