Birth of a Beauty, Episodes 1-2: There's No Such Thing as a Free Makeover 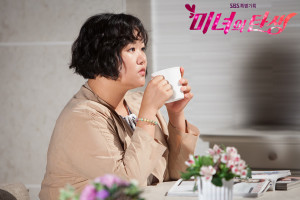 It’s not that big girls need love too, it’s that they need pity and really good cosmetic surgery. At least, that’s what I expected the pilot episodes of SBS’s Birth of a Beauty would try to have me believe. However, I stand corrected.

Reminiscent of the hit 2006 film, 200 Pounds Beauty, the familiar make-over/revenge plot is re-vamped with humor, mystery and an attempt at social commentary that make Birth of a Beauty both unique and touching. It’s not that plastic surgery becomes a cure-all for the plight of Guem-ran (Ha Jae-sook). Rather, her transformation forces both her and the audience to consider the complex beauty standards that seem to dictate a great deal of a woman’s life.

The drama manages to combine quirky humor and delightful comedic timing with the touching emotional struggle of Guem-ran: an overweight woman who, after being jilted by her husband (Lee Kang-joon), fakes her own suicide and undergoes full-body plastic surgery. She is re-incarnated as Sara (Han Ye-seul), the ‘perfect woman,’ with the help of her mysterious benefactor Tae-hee (Joo Sang-wook). 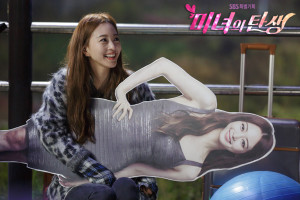 First up, I appreciate that writers delayed the realization that Sara and Guem-ran are the same woman by introducing Sara and Guem-ran independently. Sara, who it turns out is delusional from too much anesthesia, first encounters her double through re-runs of the television show Change. Both the viewers and Sara are given a chance to witness the impact that Guem-ran’s image has on her daily life, and empathize with her independent of her transformation into Sara.

Guem-ran’s weight is not a vehicle for comedy: a welcome change to the general characterization of overweight characters on Korean television. Instead of laughing at the could-be physical comedy of her being slapped in the face by a fish and falling on the bus, viewers are appalled by the reactions (or lack thereof) of those around her.

It seems Guem-ran can’t catch a break, from her cruel in-laws, to her cheating husband, to her elimination from Change, all culminating in her fake suicide. Ha Jae-sook does an excellent job of allowing the audience to identify with Guem-ran’s simultaneous vulnerability and strength without simply pitying her.

The core of the drama falls in the dichotomous experiences of Guem-ran and Sara. While Guem-ran’s weight becomes a reason for people to overlook all her great attributes, Sara’s beauty becomes a means of amplifying those good qualities to everyone. The good qualities that were expected of Guem-ran (filial piety, cooking, cleaning, etc) become surprising attributes to a beautiful woman like Sara.

The writers make limited obvious jumps from Guem-ran to Sara to demonstrate these parallels. Rather, they casually show Guem-ran playing the piano for her in-laws going unappreciated; then, in the next episode, Sara jumps in at a charity function to play the same opera piece for her in-laws to be met with praise. Sara is able to be seen as a surprisingly multidimensional woman by her ex-husband, while he seemed unable to appreciate the same qualities in Guem-ran.

Guem-ran and Sara are both noticed for their physical appearance, but Guem-ran’s appearance brings her isolation and shame while Sara’s beauty only makes her more endearing to the general public. A weakness of this method of dichotomy is that it makes it difficult to consistently envision Guem-ran and Sara as the same character, despite the attempts to visually over-lay the two actresses. 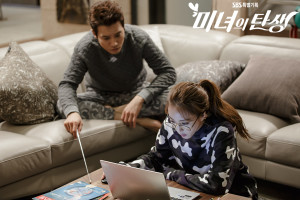 There’s no such thing as an non-problematic drama, and there are a few concerns I have. While Han Ye-seul’s Sara does retain a great deal of Guem-ran’s character traits, her agency has been handed over to Tae-hee through a contract she signed in blood without even reading (that might be a problem later).

This begs the question, if Tae-hee ‘made’ Sara what she is now, does that mean he owns her? Has Guem-ran, in becoming Sara, also become just an object? Sara has broken free of the stigma of being overweight, but in doing so has become victim to a new side of the male gaze and a whole new set of expectations for how a beautiful woman should behave.

Sara, like her cardboard cutout, has become akin to an aesthetic object that Tae-hee can mold and position as he sees fit. Tae-hee, despite his potentially good intentions, projects onto Sara his ideal of the ‘perfect woman’ and she willingly follows his directions. Since Sara is now perfect in his Tae-hee’s eyes, it’s only a matter of time before he begins to fall for her. (However, it would far more rewarding for Sara to win both Tae-hee and her ex-husband’s heart by being true to Geum-ran, don’t you think?)

Aside from the touching moments of social commentary, the drama is humorously quirky and surprising.  Joo Sang-wook and Han Ye-seul share an unexpectedly balanced romantic and comedic chemistry that is neither overwhelming nor forced. With a familiar storyline, Birth of a Beauty is the kind of drama you can watch casually each week without becoming overly invested (while also being fed a little food for thought). The fast-paced nature of the drama ensures that even more conflicts (and laughs) are eminent, and I plan on rooting for Sara’s continued success each week.

Readers: Will you keep tuning in for Birth of a Beauty? What won or lost you in the pilot episodes?