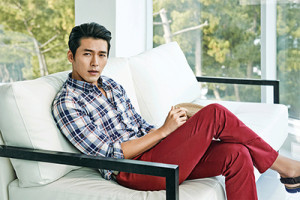 Mark your calendars! Next January Hyun Bin (Secret Garden, My Name is Kim Sam-soon) and Han Ji-min (Rooftop Prince) are teaming up in a new romantic comedy titled Hyde, Jekyll and Me. Hyun Bin plays Ku Seo-jin, a theme park owner who is torn between his good and bad personalities. Despite his fame and fortune, the ghosts of his past have forced him into social isolation. A circus group at the park led by Jang Ha-na (Han Ji-min) struggles to stay at the park. Jang Ha-na tries to stop Ku Seo-jin from ending their careers; in the process she falls in love with her salty-then-sweet boss, a new take on the love-triangle storyline.

It will be interesting to see how the series handles Ku Seo-jin’s dual personalities and Jang Ha-na’s love for him. Many popular dramas, including Hyun Bin’s My Name is Kim Sam-soon, feature wealthy men who are already more Hyde than Jekyll. A female lead being dragged around, physically restrained, stalked, and insulted is nothing new in dramas. So a character with an explicit Hyde personality will probably have to do something more extreme. The female lead’s never-ending compassion and pure heart usually saves the day in these types of dramas. It remains to be seen how similar the series will be with the webtoon; but it would be interesting to see a female character who didn’t tolerate bad, and sometimes downright abusive, behavior we see so often in dramas.