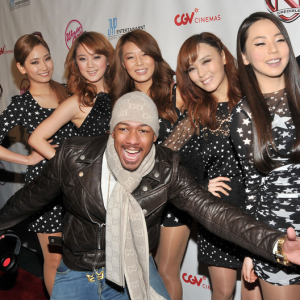 Nick Cannon will be co-producing a new series aimed at teens titled The Drop (a.k.a. K-pop High), which is predicted to air on Nickelodeon.

The Drop will be a half-hour musical comedy, possibly in the vein of Glee and Dream High, centered around the trials and tribulations at a boarding school. The K-pop twist comes in the form of three girls who meet and unite over a shared love of Korean pop and the “K-pop vibe.”

Cannon will work with Tommy Lynch (The Secret World of Alex Mack), Steve DeNure (The Zack Files), Tracey Jardine, and Jim Corston (Satisfaction) on the DHX Media project. No casting announcements have been made, but production is anticipated to begin sometime between December 2014 and mid-March 2015.

K-pop has been gaining traction in the United States, from Crayon Pop’s “Bar Bar Bar” on ABC show Selfie to Billboard’s now-defunct K-pop charts and features. One of K-pop’s earlier ventures into American media was the Wonder Girls’ TeenNick original TV movie, The Wonder Girls, produced by Nick Cannon himself. With a regular series on a large network, the American K-pop fandom could grow substantially.

K-pop fans on Twitter have expressed confusion and flat-out displeasure. There’s already a Change.org petition calling for the show to stay off the air, a mere day after the announcement. Petition creator Ananya Nair wrote:

[K-pop] is a niche genre for a reason. Those who are close-minded to it, [a.k.a.] the general public, are quick to judge without taking the time to understand it in the first place. By allowing [The Drop] to air, we are inviting more ignorance than new fans. There are already enough people who are ignorant about Korean culture, we don’t need more.

Do you agree with Ananya, or are you looking forward to The Drop?