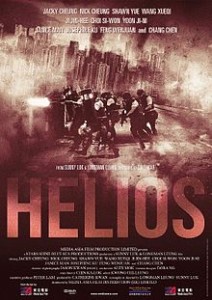 Super Junior’s Choi Siwon will return to the silver screen in the thriller Helios this April! The Hong Kong film has an international cast including Ji Jin-hee (Jewel in the Palace), Yoon Jin-yi (Discovery of Love), Jacky Cheung, and Nick Cheung. The film will first be released in China before it opens in other countries, including Malaysia (May 28). It’s written and directed by Sunny Luk and Longman Leung who were behind the award-winning blockbuster Cold War.

In the movie, everyone is searching for the criminal Helios and his assistant. After stealing uranium, the duo plan to make nuclear weapons and trade them with terrorists in Hong Kong. Authorities from South Korea, Hong Kong, and China team up to stop the criminals and save the world. Choi Siwon plays a police officer who tries to hunt down the terrorists before it’s too late.

It’s been quite a long wait for this movie! A press conference for the film was first held in 2013 with the assumption that it would be released in 2014. However, despite unveiling additional trailers the release of the film was delayed for months. Finally, we get to see Choi Siwon in what is shaping up to be a slick, action-packed film.

Check out the trailer:

If Helios is any indication, then 2015 should be a great year for Korean actors!