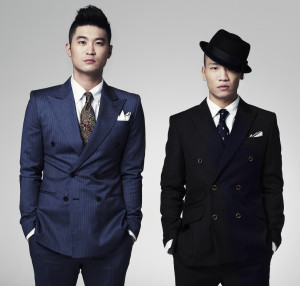 From Agatha Christie, to Sherlock, to Cluedo, to the abundance of crime shows, the world has always been obsessed with mysteries and unsolved crimes. Dealing with the mysterious, intriguing and dark aspects of life, it only makes sense that the K-pop world would draw inspiration from this genre too.

SHINee, Dynamic Duo and NU’EST are three artists that have taken something from the genre and developed it further than the ordinary ‘Who done it?’ Each song becomes new and intriguing as they develop their own stories, with the final product coming out different each time. Will follow the usual dark route, or do something more light hearted with the genre? We will have to see!

In “Crime Scene”, Dynamic Duo overlaps the story of a person leaving a relationship without a word, with that of a murder. They have adopted the roll of the victim in their song, filling it with mystery, desperation and heartbreak. The metaphor of a “crime scene” permeates through the entire song, painting the strong picture that the girl that has left is a murderer. With lines like ‘My tears were red like blood’, it is clear that this is a dark look at relationships and their outcomes. To put it simply, this song is serious; the atmosphere of the song and the almost lifeless voices of the artists creates a feel that is almost soul crushing.

The loneliness of the scene is the only clue to solve this
Follow the traces of the crime with no beginning
I am chasing it even though you left me
I empty my place but I can’t empty you
I do the dishes but I can’t erase the happy times with you
Where are you, where are you

The blame entirely lies with the girl in the eyes of the artist; To them, they have done nothing wrong in the relationship. Yet, they are still searching for answers as to why she left — as if answers could help. This song fully embodies the concept given, choosing a dark premiss to add extra emphasis on the heartbreaking end of the relationship. Dynamic Duo has chosen the expected route based on the inspiration and the final product came out perfect. I mean, who ever heard of a happy murder?

SHINee chose a different route than Dynamic Duo by playing the role of detectives that are in pursuit of a girl’s heart. They seem to be on top of this case; They have already identified their main suspect and found the ‘evidence’ that ‘incriminates’ them. Living up to the name of the song, these super sleuths are as good as “Sherlock”.

“Sherlock” is a bit of mystery itself, as it always keeps you guessing. As it is two songs put together to make one, “Clue” + “Note” this sort of makes sense. This was SM Entertainment’s style from 2011 to 2013. Also, shout out to Girl’s Generation’s “I Got A Boy” as it may not have anything to do with mystery or crime, but it sure did keep you guessing because it changed so much. But enough of that, let’s bring it back to “Sherlock.”

The mystery in “Sherlock,” of course, revolves around the girl. The lyrics encompass the tentative interest that blooms into an ‘investigation’ when boy meets girl. By studying her body language such as her ‘trembling breath’ when they talk, the boys try to find ‘evidence’ that the girl likes them. What more could we expect from these guys, after all they are definitely ‘curious’. It is a cute and heart warming introduction, if ever I heard one.

The suspect is in here
No one can leave
You and I, or anyone
Everything about you
I have found evidence
I will certainly find you

After collecting enough ‘evidence’ the boys decide that it is time to ask the girl about her feelings in an ‘investigation.’ Let’s just hope, they don’t use ‘Bad Cop Good Cop’ tactics on the girl; They want her to like them, not completely traumatize her. Every lyric of this song has been connected to the detective theme to create a new and interesting progression of ideas.

It is extremely believable that one or all members of SHINee could be exactly like Sherlock, especially with the assumptions based on a girl’s body language. Though, sometimes the wording can seem a bit forceful, especially when they are using the word ‘interrogate’ to symbolize asking a girl if they like them. However, within the context of the song it is understandable and adds to the aesthetic.

While SHINee’s “Sherlock” was light with the blooming of new love, in NU’EST’s “Beautiful Ghost” the pursuit of a girl is a little harsher as they express frustration towards a girl who is like a ‘ghost’.

I can’t take this game of hide-and-seek
Like Sherlock Holmes, I will find you

Rather than portraying a mystery, this song portrays a chase or pursuit. It describes the frustration that occurs when a girl isn’t clear with her feelings. Though NU’EST shouts ‘I like your everything’ it seems that the girl tauntingly doesn’t give a reply back, which encourages NU’EST to give chase. They describe themselves in many different ways, including the example of Sherlock. I don’t think the girl will get away in this case, though, as NU’EST further describing themselves as ‘hunters’.

They sound like criminals more than detectives if you ask me, though Sherlock Holmes has toed the line a few times, too. That said, I think they would get a lot further if they took the time to investigate more about the girl, through maybe a conversation. Or maybe, she’s just not that into them?

With SHINee’s super deductive abilities and NU’EST’s talents in pursuits, I’m sure Dynamic Duo could get some help with their mystery. Pretty sure SHINee would be Sherlock Holmes and NU’EST would actually be John Watson, though. However, I’m sure together they will get to the bottom of this!

Readers, do you enjoy themes and storytelling in K-pop songs? Which of these releases was your favorite? Know anymore K-pop mysteries or crime related songs?