Minah Declares “I Am A Woman Too” on Solo Album 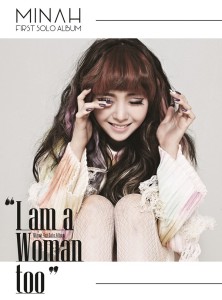 The latest idol to make a solo debut is Minah from Girl’s Day. Solo debuts from established groups have become a method for further promoting an individual idol group in an over-saturated genre and give certain members a way to make a name for themselves as solo stars.

Minah’s debut mini album I Am A Woman Too attempts to showcase a few songs of varying styles to see which suits her best. Minah worked with the prolific Duble Sidekick on the mini album. I Am A Woman Too is short and catchy, but what makes it work are the moments when Minah as a soloist can be distinguished from Minah of Girl’s Day.

Her mini album starts off with the “That’s So Weird” featuring Kanto of Troy. The initial finger snaps lead into a rap by Kanto. The song is a mid-tempo number that has water droplet effects which could also be interpreted as text message notifications from a mobile phone. “That’s So Weird” is whimsical and sweet — fitting the sounds of the spring season.

“My heart is strange,

Your face flickers before me.

When I miss you,

I keep looking at your picture

Then when you call me,

Minah sings about the feelings she gets when she longs for her special someone. She questions why her heart is so strange when she misses them. Kanto also raps about the longing that he feels — comparing his anticipation for buying clothes online to the day he meets with his loved one — perhaps not the most romantic analogy, but it works. The structure of the song is a bit formulaic with sung choruses alternating with rap verses from Kanto, but the simple melody is a strength that allows the song to shine.

The next track on the mini album is the title song “I Am A Woman Too.” Along with Double Sidekick, the production was handled by Golden Du-hyeon and Mustang. “I Am A Woman Too” is a sensual R&B song. The production is light and has a pulsing beat and there is an intriguing contrast between the upbeat instruments and the singing, which have an undertone of sadness.

The song is a grower, as it builds to the chorus. The choruses express more desperation as she asserts that she is a woman that wants to be loved and asks everyone to sing along with her repeated refrain of “I love you love you love you.” Minah’s voice is lovely and powerful here as she wistfully navigates the vulnerable verses. The song could have done without the male voices interjecting throughout, but it is a strong start nonetheless. 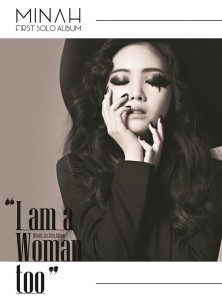 The final (non-instrumental) cut from the mini album is “Colorful.” There are also some R&B undertones simmering on this pop track. Minah’s voice is well layered here, but at times the production is extremely busy. There are synths, a snare beat, and some male voices that occasionally chime in with “hey, we like to party.”

You may have guessed it based off the title alone, but the lyrics revolve around how Minah’s interactions and thoughts of her love interest remind her of certain colors. For instance, “sky blue smiles” and “violet scent” are certain colors that come to mind when she reflects on her love interest. “Colorful” is nice sounding, but her voice can get swallowed by the busy production during the choruses, smothering the tone and nuance of her vocals.

I Am A Woman Too is a well conceived effort in propelling Minah as a solo singer. The tracks all have an R&B flavor showing potential for Minah to create a space for herself outside of her group activities. While some of the production feels a bit tired and formulaic, Minah does have the chops to pull off these songs. If she wishes to further differentiate her solo work from her group’s, she may want to consider a different producer to one who has crafted major hits with her group in the past. Overall, this is a solid debut effort from Minah.