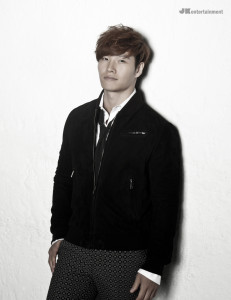 It was announced that Kim Jong-kook is to make his acting debut in the upcoming KBS drama Producer. It is clear that the strong man from Running Man is ready to step out of his comfort zone and pursue something different.

The drama already boasts a star-studded cast with Kim Soo-hyun, Gong Hyo-Jin, IU and his long time friend, Cha Tae-hyun already part of the cast. Could it be that Jong-kook is the icing on the cake?

He is not as entirely out of his depth with this drama as one may think. This is because the drama revolves around the set of a variety entertainment show. I have no doubt that Kim Jong-kook will be able to channel his large amount of experience on variety shows, such as X-man and Running Man, to get into his character.

This is not his first appearance in a drama or movie either, as he delighted fans by taking on a small cameo role in Lee Kwang-soo‘s movie Wonderful Radio alongside fellow Running Man member Gary. As both were entertaining and funny, who is hoping this could be an indication of what is to come?

So, what sort of character would you like him to play? Are you looking looking forward to seeing more of the Kim Jong-kook from Running Man, or do you want to see something different?