We’re down to the final eight! The winners of each respective region has been decided and now they will compete across regions, within their gender, to decide the ultimate male and female contender for this year’s March Madness crown. The representative from the Rap region will go up against the winner of the Dance region, meaning the winner in Vocals will be facing the winner in Visual. Here’s how the bracket shapes up after four rounds of voting. 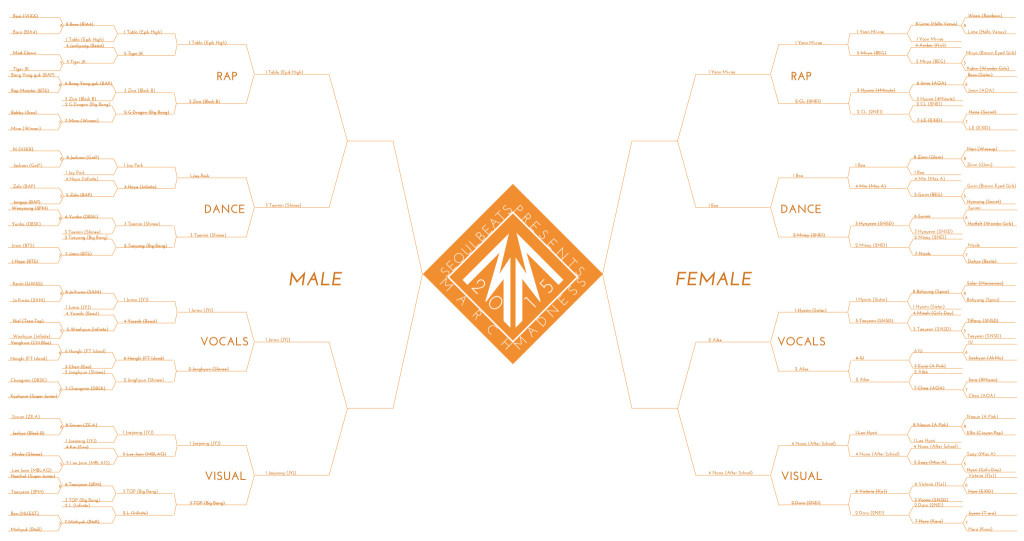 There were a few stunning victories during the last round of voting. Most surprising of all was Taemin‘s late rally to overtake Jay Park in the Male Dance region. In the female regions, we witnessed Nana pull off her second upset in a row, dismantling Dara in Visual. In a most triumphant and decisive victory, Ailee unseated last year’s female representative in the Championship round, Hyorin, while locking down the female Vocals region.

This leads to several highly intriguing matchups this round. Most notable of all is undoubtedly JYJ versus JYJ in the Junsu vs Jaejoong matchup. The winner of this matchup will certainly be heavily favored to win the whole thing. Furthermore, it’ll be interesting to see how our representatives in Rap, Tablo and Yoon Mi-rae, fare against stiff competition from Taemin and Boa, respectively. Will the two be able to go all the way and meet in a potential final round showdown? Voting for the Elite 8 wraps up on March 24 at 11:59 EST.

Eight remain but only one will be crowned in the end. Madness [insert dramatic verb here]!