Parisian Grace and Petits Macarons: Laboum's "What about You?" 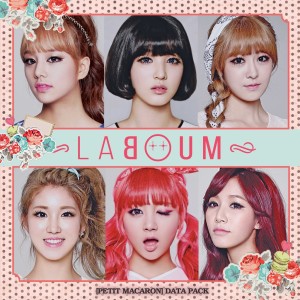 As of this year, NH Media and Nega Network have proposed to the K-pop scene their own variation of an idol group pleasing to the eyes and light for the heart, a sweet and pure bouquet of singing dolls, the freshly sprung Laboum!

Prior to Laboum’s arrival, NH Media and Nega Network commented that they would introduce a girl group with a vibrant and innocent concept, distant from the domain of sexy concepts enthralling the K-pop scene. On part of the promise made by their agency, Laboum, as that girl group, is able to keep the promise in those comments thanks to the release of the MV for “What about You?”

Featuring a recycled doll concept with reworked and original costumes, acting, and setting, Yujeong, Soyeon, ZN, Haein, Solbin, and Yulhee each mesmerize with their display of professionalism and a dash of sugar

Emphasis on the term “recycled,” however, as the concept brings to mind the lineup of other girl groups who transformed the same doll concept into deviations of their own: Ladies’ Code with “So Wonderful” and Stellar with “Marionette,” among others.

What stands out in the music videos of both Ladies Code and Stellar is the lack of connection between the visual and audio. Nevertheless, “What about You” sees Laboum donning their Alice-esque outfits with glassy doll eyes bringing to life the essence of the song, a miserable and tiring love turning them into emotionless and helpless “dolls.”

In the group’s MV, symbolic details strengthen the credibility of the song and how it is presented visually. For example, the ribbon wrapped around the legs of each member somehow inspires images of living dolls being pulled around and controlled by an unseen hand, and the scene where Haein is resting her arms on the clock might symbolize time running out for reconciliation. Generally, the doll gestures acted out by the girls, especially Yujeong and maknae Solbin, are quite impressive and realistic. Their lovely costumes and docile demeanor above all make you want to scour all the stores in South Korea in hopes of finding and buying one of them!

To add to your treasury of foreign languages included in Kpop songs, “La boum” means “party” in French, and their album title Petit Macaron means “little macaron.” So what might the use of the French language do for Laboum? Make their entire concept more satisfying, of course! The soft taste of a macaron after sipping coffee in a Parisian café in human form would be each member of Laboum dancing and singing in their MV for “What about You?”

Tunefully, “What about You?” is a very catchy and light pop song. Not of complete frilliness and frivolity though, the vocals of members Yujeong and Soyeon add complexity to the song and proffer far more of an elegiac rhythm about a brokenhearted girl singing her pain away. 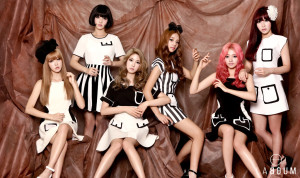 For a quick look into the lyrics, the focal conflict involves an exchange of “what to do’s” between the girls and their indifferent paramour as they lament being left for another woman. By being subjected to “crumbling apart,” they have become fragile and memory-less dolls. The opening line of “What about You?” is a prudently used allusion to an old saying:

If your tail is too long, you’ll get caught

You know that saying? (What are you gonna do)

I kept pretending I didn’t know

What makes “What about You?” unique is the genuine creativity clear in Laboum’s use of the doll concept. Their style and sound mingle together to create a memorable MV that is vibrant and original. To put it simply, it feels very authentic. Even though the lyrics of “What about You?” and overall song speak of a story that K-pop is extremely well-acquainted with, the brilliant visuals in the MV set it apart.

Laboum is a girl group on the right track; they have trained diligently to engage and inspire their “Latte” (makes you want to enjoy it with a plate of macarons nearby) fandom from the start, and even provided passers-by looking for quick optimism with an engrossing and intriguing presentation of what rookie girls groups have to offer.