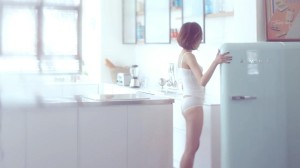 Stellar‘s “Marionette” currently possesses the distinction of being one of the most disliked K-pop MVs on YouTube. There are many possible reasons as to why the reaction is so overwhelmingly negative, but in attempting to explain the displeasure, it is important to analyze not only the lyrics, the music, or the overall message of the song, but the filmic techniques used as well.

First of all, the focus–or rather, the blurriness or crispness of the image–is consistently inconsistent. From the beginning of the video through until the end, every single shot goes out of crisp focus and into blurriness, or from blurriness into focus, at least once. This produces a disorientation, where the viewer is unsure what aspect they are supposed to be paying attention to within the composition of a shot. When everything is blurry, this blurs not only the image but also the potential message it is supposed to convey.

Given that Stellar is a group without widespread recognition up until now, I would also have appreciated clear shots of each member’s face in order to better get to know the individual members, rather than facial images that blur as soon as they appear on-screen. I wonder what effect the blurriness is supposed to produce–is it meant to partially shield the provocative dance moves from full visibility? Or meant to convey the idea that Stellar shifts in and out of a clear reality? Either way, the desired effect is unclear, and the endless shifting focus only obscures the members’ faces, the choreography, and every individual scene. As a viewer, it is frustrating and almost painful to watch an entire MV that never seems to achieve a clear, non-blurry focus for longer than a second.

The lighting also makes the video difficult to enjoy. The choices in lighting literally overexpose the shots–overexposure in this case meaning certain details cannot be captured due to having too much light in certain areas. Like the focus, this is noticeable in nearly every scene, and it is the reason why the kitchen scene, the bathtub scene, and the bed scene are extremely light, bright, and fuzzy.

Because overexposure blurs out details and dramatically brightens compositions, it is often used to enhance a dream-like mood, producing images that are almost ethereal in quality. However, in “Marionette,” a dream-like undertone does not seem to fit the sharp and sexy choreography, the pop musical quality of the song, or the forlorn lyrics.

Nor is the overexposure well-executed. It interferes with the character of the group dance scene by continually moving its location, such that pure white light comes through the large windows and proceeds to rapidly flash from left to right to left again. Since white leotards tend to blend into a white background, it even distorts Stellar’s figures, resulting in some very strange images that are often out of focus to begin with. Rather than adding visual interest to the shot and enhancing the dance scenes, this technique draws focus away from Stellar and the song, further disorienting the viewer, especially when combined with the effects of the shot falling in and out of focus.

Finally, the camera angle and framing of the shots construct even more of a disconnect between the viewer and the image. Stellar are often awkwardly cut off at their ankles and calves by the framing of the shots. Since K-pop is a heavily dance-focused genre and MVs normally showcase the difficulty and synchronization of the choreography, cutting off Stellar’s feet and ankles detracts from the MV most obviously during the dance scenes. It creates a peculiar missing limb effect, where the audience finds themselves looking for a body part that is not displayed on-screen.

In addition, many scenes are shot from very low angles, so that the screen is filled more by the overexposed ceiling window than by the members themselves. These low angles are sometimes used while simultaneously slicing off different portions of the members’ legs, and the result is an unbalanced composition that stretches reality for no thematic reason.

The artistic choices in Stellar’s “Marionette” are bold, but the rapid changes in focus, overexposure, framing and angle ultimately result in an MV that is difficult to enjoy even while disregarding the content. 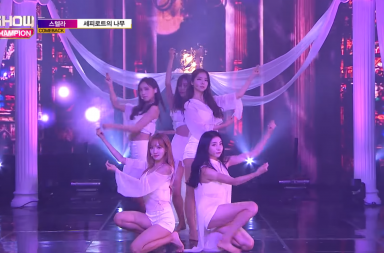