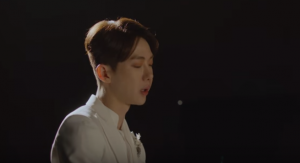 Back in September Jo Kwon shocked fans by leaving JYP Entertainment, his label of 16 years, and a few months later joined with Cube Entertainment.  Now, Jo Kwon returns to music with his new label and a not-so-new image. As previously examined, there was concern from fans over Jo Kwon choosing to team up with Cube due to the their previous controversies with its treatment of previous and current artists. Jo kwon, however, disagreed and felt that Cube would help enact his vision perfectly, and it looks like that meant doing almost exactly what he did with his last musical project.

For his first step in his newest chapter, Jo Kwon doesn’t take any risks and plays it safe with another heartbreak ballad about a lost love in his digital single titled “Lonely.” There’s nothing terribly unique about this song or MV and it bares similarities to his last comeback single, but that’s not to say that it isn’t still beautiful and well done.

The MV opens with a black piano while Jo Kwon, angelically dressed all in white, is suddenly playing the piano beginning the song. Yu Seon-Ho, Jo Kwon’s fellow labelmate, stars in the MV as an set designer who innocently goes about his day working on a project which is later revealed to be the actual set that Jo Kwon is singing on. 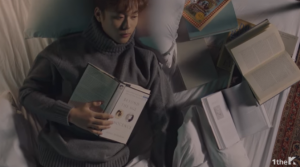 The plot is simplistic and almost appears to be unrelated to the song but there are hints throughout, like sighs and frowns that give away the protagonist’s frustrations. One may think that he’s exhausted from his work but there are also indications of something deeper, like his struggle in choosing a book to read while getting lost in thought and a rose in a bell jar on his work place that’s similar to that of Disney’s Beauty and the Beast. The MV, even its purity, manages to subtly tell a story about heartbreak through these little clues.

Going along with the images in the video, the song starts off slow, and builds upon layers as Jo Kwon sings about missing someone who is no longer in his life:

As if I paint on a white canvas

I fill my empty heart with you

I miss you who colored my heart 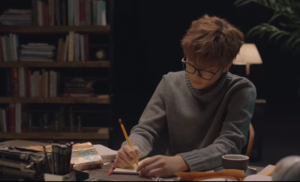 The analogy Jo Kwon uses regarding art parallels well with the MV’s plot as the protagonist is creating a set that doesn’t seem to satisfy him. It’s as if to say his creative process isn’t distracting him from the pain that he’s trying to hide. The imagery in the MV is a bit retro with items like typewriters, pencils, and books mixed along with other modern items. This affinity for the classics correlates with the lyrics in which the narrator is longing for the moments they were once together and therefore clinging to a time in the past.

The colors in the MV are soft browns and gray-blues that create a peaceful scene, but it also plays heavily with shadows. Both Jo Kwon and Yu Seon Ho are surrounded by darkness which emphasizes a loneliness and isolation to the viewer from the other characters in the scenes. There are touches of soft glows and it’s especially prominent when the protagonist observes a moon-like orb during the climax of the song, and it symbolizes the narrator’s search for splashes of light that remind him of his now-gone significant other. Once again, the MV is subtle but still artistically depicts it’s message of heartbreak. 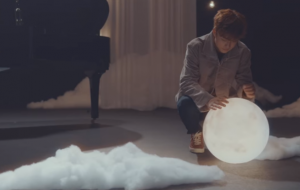 Like “Crosswalk,” Jo Kwon’s newest single starts off slow with a piano opening. However, “Lonely” eventually leads to a chorus and adds more instrumentals to the height of ballad. The song beautifully evokes the heart-wrenching emotions of the lyrics, and Jo Kwon’s voice is as angelic as his image playing a piano on the heavenly set. He impressively carries the song up with a vibrato, and tapers it down again back down to the line again:

Are you living happily?

The song is depressing in that there is no happy ending, and the narrator is only left wondering how his previous love is now living. The MV perfectly captures that sense of longing and frustration through a basic plot and the use of lighting. 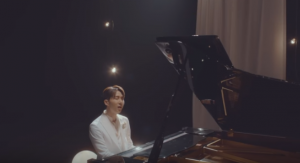 It’s clear Jo Kwon vision for himself is in keeping his music similar to what he last did with JYP, and it definitely works for him. He may not be reinventing himself with guns blazing and diving into unknown territories but rather takes it back to his 2AM days effectively establishing himself as a crooner of romantically tragic ballads. Both the song and MV are beautifully done, and a great first step for Jo Kwon with his new label.