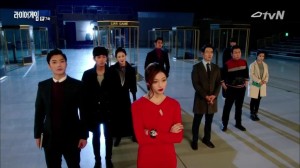 In episodes 7 and 8 of Liar Game, we get to see a tremendous mental chess match between two maestros of the human mind, and one player gets fed a nice slice of humble pie.

Ryu Yong-jae, I am disappointed in you. I know that you know how to intermix episodic plot and character development. You did it just last week. Yet here, we have a return to the issue of episodes 3 and 4. The first ten minutes of episode 7 and the last 10 minutes of episode 8 have character development, backstory, and references to the larger scheme. In between that, there is nothing but this week’s game.

To be fair, this weeks’ game give the audience something that we have been dying to see since the first episode: Woo-jin and Do-young playing chess with everyone else as pawns. The game of the week is to have the players select outside candidates run for president, and the president will divvy up the cash and eliminate competitors. Da-jung nominates Dal-goo, the aide convinces his candidate to run, and Jamie nominates none other than Do-young.

What follows is an hour and a half of Woo-jin and Do-young facing off, trying to get one up on the other. It becomes a challenge encompassing many things: Do-young’s lying versus Woo-jin’s lie-detecting, Do-young’s obvious screwing against Team Da-jin’s honesty. It boils down to Lie versus Truth, with Do-young providing this weeks’ theme: what is the point of trust?

Everyone gets stabbed in the back and stabs people in the back. Even Da-jung’s heart is starting to harden against people who would betray her. And when trust, built on honesty, is so easily shattered, what’s the point of it at all? Why should anyone ever want to trust anyone? Trust keeps you from looking out for yourself, and at the end of the day, isn’t that what really matters? 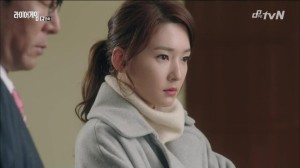 The question comes to a head when it turns out that, no, the other players don’t trust Team Da-jin. Do-young wins, just hands Woo-jin his ass on a platter. Shit has just gotten real for our genius boy, and where Do-young was an obstacle, now he’s the threat. I like this. After all, boring invincible heroes, are boring. Always winning means never losing, never stumbling, just being flawless, which no one can relate to.

It’s really a shame how much the characters got shunted to the side in these episodes, because the few character moments we do get leave a much bigger impact then the game does. Sure, Woo-jin getting served is great for his development, and watching him eat that humble pie was a smidge cathartic, but we knew it was coming. It would have been possible to serve that pie along with better development of the other characters.

PD Lee, Dal-goo, and Do-young really get the chance to shine in these episodes. We start seeing what they’re made of, not just what they show the world. Case in point is PD Lee. She’s always seemed a bit scrappy in that she knows Do-young is up to something, but she’s not smart enough or tough enough to stand up to him. In episode 7, though, PD Lee proves she has balls of titanium when she directs her camera crew to enter a makeshift operating room and tells a mob boss to let Dal-goo go, or she’s calling the cops on him. This one scene proves that she is a lot tougher than anyone gives her credit for.

Dal-goo tells us the story of how he met Da-jung. He had met Woo-jin in prison, serving time for his first love. When she left him, Dal-goo swore to never be used, and therefore never trust, again. But when he starts his job as a debt collector, Da-jung was his first target, and like Woo-jin, was won over by her goodhearted ways. He understands that she is a rare breed, and wants to protect her because no one else will.

Do-young, though, steals the show. For so long, he has simply been mysterious, manipulating the game with no clear objective. Last week, I referred to him as being like David Xanatos, a character who is skilled at setting things up so that no matter what course of action you take, he wins. Boy, was I wrong. Do-young doesn’t offer choices. He knows exactly what everyone will do in any scenario. There is no choice. 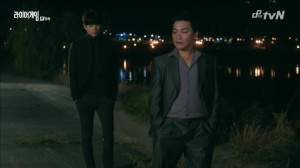 We also get a taste of his backstory. When Woo-jin gets his files, he immediately recognizes one of Do-young’s prior addresses as the name of a utopia in a novel by B.F. Skinner, one about creating a perfect society via behavior manipulation and the name of a psychological experiment from 20 years ago, one involving children in masks like the one Do-young wears on the show.  Then he starts practicing emotions in the mirror. This innocuous activity becomes chilling  due to Shin Sung-rok‘s performance. He doesn’t look evil or menacing. For a good 30 seconds, I didn’t think he was human.

At this point, we can safely guess that Do-young crafted this game as an experiment. He’s doing it for Teh Evulz. And that’s what makes him terrifying.Normally, a character being evil for the sake of evil is just lazy. In Liar Game, it’s balls-out nightmare fuel. Do-young has been setting this up for a year, minimum. He got Dal-goo his job collecting debt so that he would meet Da-jung, who would end up in the Liar Game but needing help, thus bringing Woo-jin in. This is someone whose lies cannot be predicted by the best facial reader in the world. And he’s just screwing with people. For kicks. His talent for manipulation effectively robs people of their free will. Add in the fact that eliminated contestants keep vanishing, and I don’t think I’ll be sleeping any time soon.

Liar Game has all the ingredients needed for a legendary drama — good villains, relatable characters, good inter-personal and intra-personal character development, unique episodes, and an addictive mystery. Ryu Yong-jae just needs to be able to balance them all.