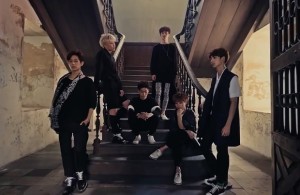 Congratulations to Boyfriend on winning their first award on a music program after four years of being active in Korea. On November 11th, Boyfriend beat out acts such as VIXX, 2AM, Song Jieun and Zhoumi to place first on SBS MTV’s The Show with their recent release, “Witch”.

From the start of the ranking it looked like VIXX would win as they were leading in the first two point categories but Boyfriend took the win with the last category, pushing them to 7669 points to VIXX’s 7666. The boys seem very surprised in achieving the win and as they came to realize they had won, the tears started to fall. This is a big moment for Boyfriend, one they’re not likely to forget.

Since their humble beginnings, Boyfriend has been growing steadily whether it be releasing music in Japan or Korea. They first debuted in Korea in 2011 with the self titled song “Boyfriend,” starting their career with a cute image. Since then they have walked down the path into becoming men with their releases becoming stronger and more mature. “Witch” is the pinnacle of this. Now with the surprise release of “White Out,” a strong emotional and vocal ballad, hopefully they shall continue down the mature path to success.

This year is definitely a year of firsts for Boyfriend with them  gearing up for their first concert in South Korea on the 23rd of November. Let’s hope that their success continues to grow!