Boyfriend Starts Anew With "White Out"

Starship Entertainment has surprised us with their latest MV, Boyfriend’s “White Out”. If “White Out” means that they’ve whited out their past image and built a brand new one, then Boyfriend is doing it right.

Seriously, this MV is unlike anything we’ve seen before from Boyfriend. Their debut days were filled to the brim with aegyo and brightly colored skinny jeans, though in recent Korean debuts they have been experimenting with alternating between cute and dark concepts a la VIXX in what seems to be a common strategy these days.

But this MV is neither a cute pop song like “Don’t Touch My Girl”, nor is it a fierce track like their latest mini-album’s title song “Witch”. No, this time Starship has taken Boyfriend on a more mature and refined route, showcasing the group’s vocal prowess in the form of a classic K-Pop ballad.

The plot of the MV is rather unclear (if there even is one), but the video kicks off with an over-the-phone breakup that takes place entirely in English. Starship was trying to be international, but they should have used native speakers for these lines. The rest of the MV is basically the members regretting the breakup by reminiscing on past times while they cry or stare out a window.

At the climax of the song, Donghyun burns a small red car figurine, symbolizing the red car that he drove in at the beginning of the MV. Here, there’s an interesting visual dichotomy between water and fire that the MV plays with. The video before the fire is shot with light and blue tones, and there are scenes where Minwoo washes his hands while Hyunseong shows off his upper body in the shower (something that has become expected in Boyfriend’s MVs these days). After the fire, the sunsets and the sky turns deep red. This accompanies the shift in the lyrics itself: most of the song is about how much he regrets his past actions that led to his breakup, but in the shift in visual tone comes a shift in lyrical tone as well. The end of the song is about how they now work and hope for only the girl’s happiness.

But aside from this imagery, there’s not a lot going on in the MV in terms of plot or symbolism. But what this video lacks in plot, it more than makes up for in style.

Image is the big surprise in this MV.The outfits are mature and not distracting, but flashy and fashionable enough to remind you that this is still K-pop. Even set design and props were well thought-out. Nothing looked cheap or artificial, and everything had a stone or wood texture to it rather than the plastic or metal that is so common in the glitzy world of K-pop.

The MV’s cinematography is gorgeous, with sweeping vistas of the Bangkok skyline behind the group as they belt out the chorus on a rooftop. You know that this is a true K-pop ballad MV when you have the members standing on the roof of some tall building, staring off at different points in the sky — just like U-Kiss in “0330”, Block B in “Be the Light”, and countless more. Starship has always delivered quality MVs, but it’s clear they mean business here. 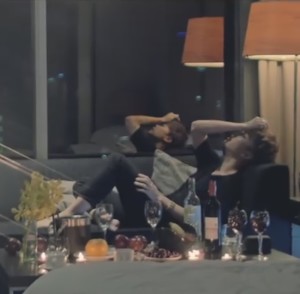 The boys acting was also a nice surprise. A couple members are a bit stiff and melodramatic; Jeongmin’s acting was a pleasant surprise; even if he’s not my bias, he caught my eye in this MV. Some other members were too heavy-handed in conveying emotion, but his melancholic distress was portrayed really believably. He’s even surrounded by bottles of alcohol, a risky move that shows that Starship is pretty serious about pushing this mature image.

The lyrics itself has are moving, even if they’re pretty standard. The boys sing about their breakup with the girl and are lamenting the fact that the reason that they broke up was that he was not good enough for her. As mentioned earlier, the song ends with Boyfriend hoping only for the best for her, as they sing in the final chorus:

When I slowly started seeing ahead, you became a dot and disappeared

Please be happy now, let me do this for you, please

The members’ voices blend beautifully during the chorus, and each member’s solo verse is also performed well. There is a slight hiccup during the bridge when Donghyun seems to be pushing his voice just a bit too high, but overall the song was pulled off impressively for Boyfriend. The sound is evocative of 2AM’s familiar power ballads like “Can’t Let You Go Even If I Die” and really proves that Boyfriend has come a long way and is now capable of handling a strong vocal ballad. (Rap in a ballad is a bit unorthodox, but Minwoo manages to make the rap break natural and keeps with the slower pace of the song. Kwangmin’s rap leaves more to be desired, but this sadly isn’t new news for a Boyfriend song.)

Overall, the MV is gorgeous in style and imagery, if not too original with plot or storyline. The song itself is beautifully written and performed, even if, again, the lyrics are not particularly groundbreaking. But the video’s main attraction is the sheer contrast between the Boyfriend of today and the group that debuted over two years ago. Even if the MV and song are nothing too special, it shows that Boyfriend is capable of producing a quality ballad and aren’t just pretty faces dancing in skinny jeans.