"Bounce" into the Rabbit Hole with Boyfriend 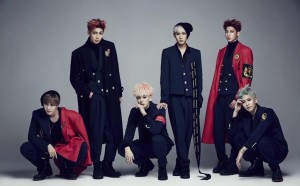 It seems to me that Boyfriend just keeps getting more and more curious. The group is back in Korea for the third time since their long stretch in Japan — it looks like the boys are here to stay in the homeland, for now at least. That being said, it looks like Boyfriend has left home and jumped down the rabbit hole for their fourth mini album, curiously named Boyfriend in Wonderland.

The title song itself, “Bounce”, has nothing to do with anything remotely Lewis Caroll, unless the word ‘bounce’ is supposed to evoke the sense of a certain white rabbit who is late, late for a very important date. Nevertheless, the music video decided to tackle the Alice in Wonderland theme head-on. One can only guess as to why Starship wanted to match the magic of Alice with a pop song, but it’s not like it’s the first time we have a K-pop music video that is wholly incongruous with the song.

Alice in Wonderland is an English literary classic, with the original novel written in 1865 by Lewis Caroll. This was followed by numerous film adaptions, including Disney‘s popular 1950’s classic, and most recently, Tim Burton‘s interpretation in 2010. The overarching visual theme of the music video is definitely evocative of Tim Burton’s trademark aesthetic: dark, nonsensical, with a sprinkling of fantastic. They’re continuing on with the look that they tried out with “Witch”, but have gone even deeper down the rabbit hole with this one, so to speak. 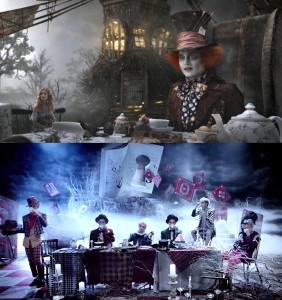 Where the MV lacks in any semblance of plot, it makes up for in its visuals. And no, I am not just talking about Minwoo‘s shirt unbuttoned halfway down his chest, or Hyunseong‘s open suit jacket over his bare torso. The MV incorporates a lot of Alice in Wonderland imagery: after a brief intro where a girl, who I can only imagine would be Alice, walks in and provocatively sheds her red hooded cloak (are we getting our children’s stories mixed up here?), the video opens onto the ubiquitous tea party scene.

Strewn across the tea table we see various objects, along with a white rabbit and his pocketwatch. The boys are all dressed up for the role with the same quirky and unusual flair of the Mad Hatter. The costuming, full of plaid and top hats, made the video just that much more of a visual feast and added to the whole Burton feel — though they did, at one point, briefly lapse into a horribly out-of-place pseudo-hip hop look, compete with oversized sweaters and gold chains. Even Donghyun‘s makeup, pale white skin and heavily accented red eye shadow, is clearly inspired by Johnny Depp‘s portrayal of the Mad Hatter. The entire set itself is eerie, with giant playing cards suspended in midair behind dead, white trees. It clearly pays homage to Burton’s interpretation of the tea party, complete with the overhanging fog and desaturated quality of the whole scene. 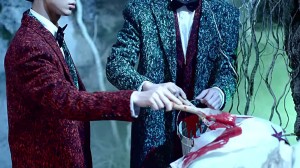 I must say that I am impressed by the producers’ dedication to the Wonderland theme; while a lot of the MV is just singing and dancing, we’re treated to a lot of references to the beloved tale. In one shot, we see the twins (who both have ditched their long and luscious locks for close-cropped, red hair — honestly the most shocking point of the entire MV, because now how will we tell them apart?) painting giant white roses with red paint. I really enjoyed these little gems that they’ve hidden scattered throughout the entire video, so quick that you might almost miss them. We don’t see anything too subtle or deep, but it showed the committment they had to embracing the whole theme and I respect that. And even aside from the tea party set, the other main set is modeled after what looks to be the inside of (Burton’s take on) the Red Queen’s castle. Most of the dance shots take place inside of this red-pillared, checker-floored room.

Speaking of dancing, Boyfriend continues to impress with perfectly synchronized choreography. It’s technically difficult enough to be impressive, and their performance during the music video shows that it is at least well-rehearsed. Also, their point choreo during the chorus is catchy and sexy enough to appeal to their maturing Best Friend fanbase. 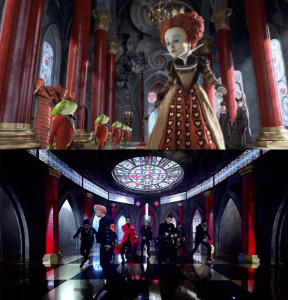 Not only is the choreography catchy, but so is the song itself. It’s nothing too amazing, and pretty much repeats the same four English words for most of the chorus, but it’s pretty standard fare for the style of Boyfriend’s title songs. I definitely enjoy it more than their previous “dark” concepts like “Witch” — it feels like they’re getting the hang of writing and performing to this new image that they are trying to push. The lyrics have nothing to do with Alice in Wonderland nor does the video, but there are some half-hearted attempts near the beginning where Donghyun throws playing cards at the camera when he says “card”, and swings a pocket watch in the air when he says “time.” That being said, I have no complaints on the vocal performance aspect — the established vocalists and Minwoo’s rapping is up to par, even though Kwangmin‘s raps still leave something to be desired.

But what I found both the song and the music video to be lacking in was a sense of narrative or progression. The song is just about a girl who is afraid to date/love/be with/spend time with Boyfriend, and the boys try and convince her otherwise. The music video is very well done in terms of visuals, but I was really disappointed that they didn’t do more with telling an actual story there either. Halfway through, Alice somehow finds her way into Wonderland, and at the end, everyone falls down the rabbit hole, but other than that, nothing really happens other than a bunch of singing and dancing.

And that’s okay — if the goal was to create a catchy song and a visually stunning video, then those goals were accomplished. The song itself is decent with a catchy hook, and the video was just beautiful and interesting to watch. It looks like Boyfriend’s dark concept is going to stick around for a while now, and while I miss the cute, pure days of the group, I must say that they are starting to finally catch up to the image that they are trying to remake for themselves.