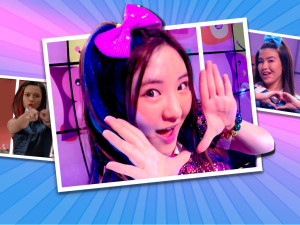 You may have heard about the upcoming US tween show loosely inspired by K-pop called Make It Pop. It initially made waves with its promise of bringing the infectiousness of Korean pop music to Western mainstream audiences. Of course, not all reactions to the idea of the show were positive as some fans claimed that the show would bring backlash upon a genre of music that we enjoy. While I am personally holding out until after watching a few episodes, the show was recently caught in a bevy of controversy with a statement one of the producers made during a Q&A session. A redditor posted a story recalling a meeting with the show’s producers. When asked if there would be an Asian guy in the show, the response from one of the producers was:

“Nope! Never! Asian guys in my show, not gonna happen.”

While the response was possibly intended as a joke — I won’t speculate on this — the statement hits hard. Whether the producer was joking or not, the literal take on the response is a shocking reality that underlies a problem within the industry itself. Asian-American Pacific Islander (AAPI) men in Western media are often emasculated and presented under the guise of a multitude of stereotypes. They are rarely cast as viable romantic leads but are instead often relegated the role of the goofball or martial artist that exhibits no sexual desire or some other trite and cliched stereotype. Regardless of the role, they are often at the butt end of jokes.

The producer did produce a somewhat more serious answer to the previous query, stating that he “was hoping to get Psy to play the father of the main Korean girl.” I’ve been wary of Psy’s representation in Western media and wondered how he would be accepted into mainstream Western media. His “Gangnam Style” MV, while layered with satirical humor along with more upfront gags, unfortunately fits into the stereotypical AAPI male representation. His comedic image was palatable because it held him as that comedic character that AAPI men have been reduced to playing and that audiences are conditioned to seeing. His comedic character subsumed his actual background or history as a rapper that makes social commentary through his satirical videos.

This isn’t a singular case as other AAPI men in movies and TV are also subjected to these roles. Take Ken Jeong‘s character in The Hangover movies. He became the crazy comedic Asian guy that solely clowns around the three Caucasian leads. Psy essentially fulfilled those preconceptions in the media during the heyday of “Gangnam Style.” Just refer to his appearance on The Ellen Show as an example. Because of the constant iteration of Asian men as comedic figurines, people are sociologically wired and comfortable accepting this depiction of Psy (and they often translate those expectations onto other people of a similar ethnic background, such as the case with Tiger JK). Even in person, they would forgo giving Psy a better introduction because they just see him do the old song and dance. His treatment in Western media has been laughable at best and disrespectful at worst.

Chin, Milman, Deo, Lee and Yuen discuss how for a group of people you have little to no interactions with, stereotypes and typifications run the risk of being the way a group of people are perceived. For AAPI men, that role is a narrow tightrope that actors and musicians traverse. Not only are they often shut out if they do not fit those particular roles, but those roles become the very wire that they must tiptoe down as these idealizations and stereotypes lead to one-dimensional, flat and tired depictions of the AAPI man.

A push for more AAPIs in leading romantic roles is one of the first steps to achieve more variety in their depiction. The Asian man in Western cinema and TV has historically been shut out of romance. Although Bruce Lee had many masculine roles, they usually did not result in his getting a romantic other by the end of the movie. It is something that has instead translated over to a gross stereotype — Asian men aren’t sexual beings — that is pervasive even today.

Television is a place where you build a perception of a group of people because you watch it on a week to week basis as it airs. Take, for example, probably the most watched sitcom (in terms of Nielsen ratings) on TV right now: The Big Bang Theory. In that show, the character Rajesh Koothrappali could not talk to a person of the opposite sex while sober for six seasons. For his character, which Kunal Nayyar has admitted is not prone to change, to have this stereotypical quirk is an unfortunate reality of what types of roles are available to men of Asian descent.

An even more blatantly offensive character steeped in stereotypes is Han Lee, played by Matthew Moy, on the show 2 Broke Girls. Goodman describes how Moy plays a Korean-American that owns a diner, but the punchlines are often things that alienate him — targeting his mannerisms as feminine, joking about his shorter stature, and tearing him down for his lack of American cultural knowledge so that he ends up being a collection of stereotypes. This is important to note as perception shapes the product and hearkens back to the punchline mentioned earlier — “Asian guys on my show, not gonna happen.”

If you question why these stereotypes are so painful, reflect on US history for a bit. In the 1800s, anti-Chinese sentiment paired with images presenting the “Yellow Peril” led to greater anti-Asian legislation, such as the Chinese Exclusion Act of 1882. Anti-Japanese propaganda in the early 1900s dehumanized the group — in turn serving as persuasive pieces to strip away Japanese-American rights — forcing them into internment camps. Fu Manchu and other such exaggerated caricatures came to serve as sole representations for whole groups of people and were a means of spurring anti-racial sentiments, justifying acts that took away basic rights, and, on a subtler level, erecting (and solidifying) the “Bamboo Ceiling” for Asians in the workplace. 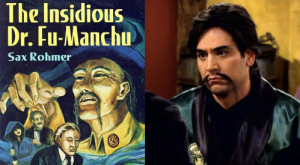 Even today, these images are still propagated. Yellowface and Fu Manchu? Look no further than popular sitcom How I Met Your Mother, where the whole main cast took part in donning long mustaches, garish makeup and, “oriental” garb. Anti-racial sentiments? Look no further than the big screen. With already low levels of representations in media (let alone representations of patriotic AAPIs), Asians cast as the perilous foe in Olympus Has Fallen, Red Dawn and The Interview, to name a few, has served to spur anti-Asian sentiments in ‘patriotic’ moviegoers.

So what is the answer? Is there an answer? Would it be better to not be represented at all if it means playing into the stereotypes? Representation is a catch-22. In the present state, Asian representation in leading roles is already quite low, and the available roles usually rely on stereotypical depictions. Hence, the decision arises: complete lack of representation or roles that reinforce these caricatures? AAPI actors carry this burden in their careers as they fear misrepresenting whole groups of people.

It isn’t all doom and gloom though. More AAPIs are seeing recognition in media and portraying more dynamic roles. While Kunnal Nayyar started off with a limited character rife with stereotypes, the popularity and longevity of The Big Bang Theory has allowed his character to show a gradual development and become someone more than a character with an inhibiting comedic quirk. Change in this case doesn’t happen overnight or in the span of six seasons. 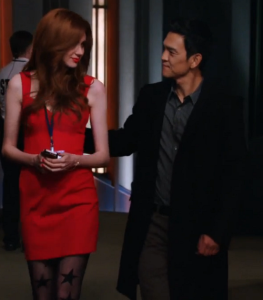 But change can happen with a greater variety of representation. An intriguing project by Idris + Tony entitled Persuasion is aimed to shed light on Asian models and present more variety in Western beauty standards. A quote from one of the founders, Tony Craig, sums up the issue:

“[Asian] masculinity wasn’t acknowledged,” he said. “It was stripped away … And the way Asian men are depicted in popular culture, [we’re] never the object … we’re still very much ‘just a friend.”

Some of the latest network shows like Fresh Off the Boat and Selfie give hope for more (and better) representation on air. While not the end all and be all nor representative of every AAPI person’s experience, the Taiwanese-American family dynamic on Fresh Off the Boat is a promising showcase of a few Asian-American stories — giving a voice and a different take from what has historically been the face of Asian-America. And despite its cancellation, Selfie allowed for an Asian-American man, John Cho, to be taken seriously as a romantic lead on a network show for once. Whether the producer of Make It Pop was joking or not, the problematic perception of AAPIs as only fitting for stereotypical roles or ‘lacking star power’ runs deep in Hollywood. If we don’t push for more visibility, then it becomes an unfair cycle that serves to keep AAPIs from every being considered viable equals.

In any case, Western media can look to K-pop itself in order to learn about varying Asian male images. The industry has been diversifying and redefining Asian masculinity. The comment the producer of Make It Pop made is a bit ironic considering the portrayal of men in K-pop and considering the show is supposed to be based off of K-pop. Men in K-pop are often seen and marketed as beings of sexual desire, and their fans have a large purchasing power. From a marketing and economic standpoint, having an Asian man on the show is something that makes sense.

Furthermore, the international K-pop fandom is one that disproves the notion that AAPI males are comedic entities devoid of any romantic agency.  The international fandom accepts K-pop idols as formidable musical acts, as leads in K-dramas, and as charismatic stars in their own right; what’s even more impressive is that they would overcome barriers to show their dedication and support to these same K-pop idols. Make It Pop should cast an AAPI male as one of the lead character’s romantic interest — better yet, they should cast an actual K-pop idol (there are quite a number of English speaking idols like Eric Nam, Kevin from U-Kiss, etc if fluency is an barrier). The show has a platform to send a strong message and portray Asian males in a positive light. If Make It Pop wants to make any honest claims of authenticity, then it should by all means avoid going the route of omission or the Asian male stereotype and try to come at the audience with a more nuanced representation of the Asian male.