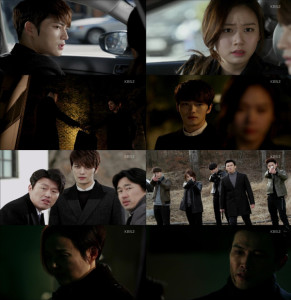 In a lot of ways, a good show always leaves you a little something to nibble on as it ends. When done correctly, the viewer should be more than satisfied with its turnout. SPY may have earned its ending, but the moments leading up to it were… interesting, to say the least.

Episode 13 revealed no one in this show can be trusted. SPY has a similar pattern of runaround as Three Days—just as you believe you’ve discovered all the dirty dealers in the show, a look around the corner reveals someone else plotting and scheming.

It’s clear the writers used Sun-woo as a vehicle to get things moving along. Not completely unexpected given he’s the main character of the show. However, what that did was paint him as a semicompetent NIS agent—one who’s physically capable of handling himself but doesn’t have the mental capacity or temperament to think rationally. He not only lets his emotions shade his decision making; his lack of attention to details and his surroundings makes him an easy target.

For instance, when he goes to rescue his sister (who’s unwittingly set up to be used against her brother), Sun-woo goes directly to her location (a karaoke), not even once thinking the NIS has bugged his phone with a tracking device. This is yet another instance in which the writers have made Sun-woo completely oblivious, most likely for the sake of giving the show more drama. But in all actuality, it just makes his character seem weak-minded and completely useless as an NIS agent. 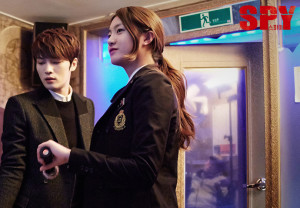 I’m not sure what it is about these so-called spies who work for the NIS. But really, what agency that invested in government activities wouldn’t keep tabs on at least their field and tech agents? The risk is too high to let anyone in an environment that deals with sensitive government information just go about their day without ensuring they don’t do something stupid—like try to defy the agency and use a slush fund disc as a bargaining chip.

However, whatever aggravation I have with Sun-woo as a character is miniscule compared to my complete distaste for Hye-rim. But more on that later

In order to ensure SPY wrapped up nicely, we get a huge bit of exposition in episode 14 to explain how everything connects, which in the end is the best way to untie the knot of a somewhat convoluted story. The problem is we get a lot of expository dialogue. Very, “So, we have to fight from both sides because they’ve committed crimes?” “Yes. Because of money.” The info dump in this episode could be forgiven. After all, there’s still a lot of show to unravel before this point. But the lazy dialogue makes this episode slightly ridiculous.

Given that the series is swiftly coming to a close, it makes sense that some of the action would be muted by the sheer amount of wrapping up being done. But that shouldn’t suggest the action isn’t at least compelling. I actually clapped when we find out Sun-woo is not only in Joong-hyuk’s home, he’s reading to his daughter. That’s just sheer class right there. Introducing Joong-hyuk’s family for the very first time in the show in the last four episodes, however, seems a bit of an obvious ploy to get us to sympathize with Team Leader Song. It also vaguely foreshadows that he’s probably going to meet his demise soon. However, this may be the show’s best made attempt at subtlety. 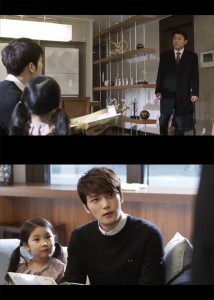 It turns out everyone’s families are in danger. After Joong-hyuk sent agents to literally break down the door of Sun-woo’s sister and father’s hideout, then have them watched in their own home, we find out that he too owes his father-in-law something that has to do with this hard drive. We never actually see him or get a good idea of what his role is in this entire government cover-up, so his inclusion seems mostly unnecessary. Quite frankly, there are far too many parties invested in the security of this hard drive. That being said, the message explored here is one that I can appreciate. SPY has become more than just a show about a mother and her son; it’s now a show about the lengths to which people will go to protect their families.

However, with the hastily executed wrap-up episodes preceding the finale, the faulty character development becomes more pronounced. I began to see more and more why people were unsatisfied with Go Sung-hee as Yoon-jin. Again, I’m at a loss as to whether it’s the actress or the writers actually doing a deplorable job in her creation, but Yoon-jin is sincerely the worst spy to ever spy. I physically cringe whenever I see her attempting to subvert suspicion because she’s just so damn obvious. How on earth did she manage to fool Sun-woo for so long?

Episode 15 has Sun-woo and Yoon-jin working together to try to both expose Team Leader Song and trick Ki-chul—and Yoon-jin’s the one doing the setting up. The entire scene between Ki-chul and Yoon-jin is so laughable I got a headache from rolling my eyes. For a split second, I thought Ki-chul was going to call her out on how completely and inexplicably telling her body language was. Whether or not it was for the sake of keeping her in the dark—because she’s actually that stupid—or if the show’s writers actually made Ki-chul as oblivious as Sun-woo when it comes to Yoon-jin, I can’t say. But it really grated on my nerves how completely blindsided all the allegedly most cunning characters were in the presence of the show’s least effective character.

It’s no surprise they kept the romantic tension between Sun-woo and Yoon-jin. But it just became too uncomfortable to watch them share the same space… and to have Sun-woo still incapable of making rational decisions in her presence. For instance, how do you just give your gun to the chick who’s been playing you? She may have caught feelings while undercover, but the fact remains she was lying to you for two years, and you’ve allowed yourself to be thrown into a gunfight with an assassin and a crooked agent (with at least armed five minions each) with one fewer weapon. I was wrong. Yoon-jin isn’t the weakest character, Sun-woo is. She may actually be the strongest. She can get away with being completely obvious and still manage to get a highly skilled agent to follow her every whim… all because he’s sprung off some pretty eyes and a soft voice.

That aside, I’m a sucker for a good old-fashioned showdown. The lowest dog is the one that begs for forgiveness after biting the master’s ankles. Joong-hyuk got what was coming to him. His final scene was probably the best executed, at first begging, then screaming for vengeance, then in desperation bargaining for his life. When he’s finally shot, it’s just a long exhale after waiting for it for the last six episodes. The editing and PD department surely earned their keep. The scene of Joong-hyuk lying dead on the ground as his cell phone rings with a call from his daughter is just classically chilling. Though in the end it’s a bit overdramatic, a shot to try to redeem an almost irredeemable character, there’s no denying it’s a beautifully executed last glimpse of this featherweight middleman. 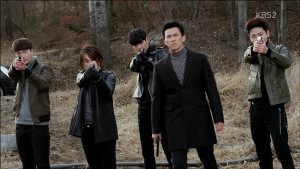 When the smoke clears, however, Sun-woo’s the one standing there looking a straight fool. What exactly was his next move after getting both parties together with the promise of the hard drive? He has it, but Ki-chul has his mother. The chips are stacked against Sun-woo from the very beginning. His ace in the hole was using Ki-chul to take down Joong-hyuk’s faction of the NIS and reveal him for the cur he really was. Other than that, he’s dealing with a man way above his level of expertise, a man who gets what he wants and makes good on his promises. Sun-woo is too used to the bureaucracy choking the NIS. Though it’s never nice to see an idol get shot, Sun-woo had it coming.

Han Sang-woon and Lee Kang seemed to have a hard time with Sun-woo’s storyline. His arc’s just so spotty. This leads to things that just don’t make sense. For example, I know we’re supposed to suspend our disbelief, but Sun-woo’s been shot in the shoulder; they say the reason he hasn’t bled out is because the bullet didn’t go all the way through, and yet we’re supposed to believe he’s going to go off and save his mother without even dressing the wound?

As I mentioned before, my frustrations with Sun-woo’s character is no match for how much of an issue I have with his mother. Not only do we see where Sun-woo gets his petulance from, her carelessness and arrogance put this whole mess into motion in the first place. Ki-chul makes a point. If Hye-rim was so hell-bent on making sure her past didn’t follow her, why didn’t she finish the job and kill Ki-chul while he was recovering in the hospital? Even his higher-ups would’ve thought of him as collateral damage. She showed mercy to a merciless man. For that, she doesn’t get my sympathy. 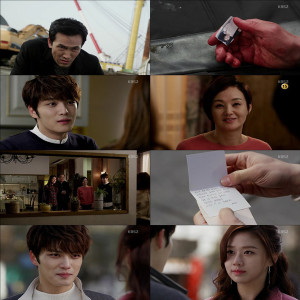 With all its flaws, the last episode was definitely the best. The pacing was just what one would expect from a spy thriller. Of course we expected the mother to live; of course we expected things to be pretty much tied up in your standard happily ever after. The ending scene with Sun-woo and Yoon-jin wasn’t incredibly original. However, that’s preferable to having them continue a romantic relationship. The writers gave us something to think about as opposed to shoving a love line down our throats. They kind of tried to the latter half of the series. Nice save, nonetheless.

There’s no denying it. The real star of the show is the flawless photography and editing. If award shows in SK are anything like those in the States, this production team needs to be given an award for just how clean and oftentimes beautiful their camerawork and subsequent editing of certain scenes are. If nothing else, I can take that away from this show. Jaejoong showed his growth as an actor, but he was given probably his least developed character to try to do something with. The writers certainly didn’t do him any favors. However, SPY was an interesting viewing experience overal. Things were a bit sloppy here and there, but for the most part, I enjoyed what the series did in terms of keeping watchers invested.