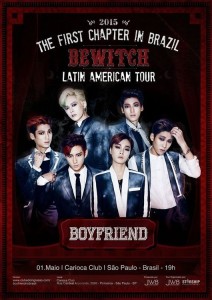 In May this year Boyfriend will be embarking on their first ever tour to Latin America! The group will be performing in four countries: Brazil (May 1), Argentina (May 3), Mexico (May 8) and Bolivia (May 10).

A representative from Starship Entertainment commented, “After successfully completing their first solo concert in South Korea last year in November, Boyfriend has received endless ‘love calls’ from fans overseas. In Argentina’s case, a show was added because of the massive amount of requests from fans there. We’re preparing our best performances for the tour.”

Boyfriend had a very successful year in 2014, promoting two mini albums and winning first place (for the first time!) on various music programs for their single “Witch.” After four years of hard work, they certainly deserve the recognition. Let’s hope that they can keep the momentum going for an even better year in 2015!

So, do you think you will be able to score some tickets? Or will you be supporting them from afar?