Rap Monster to Collaborate with Warren G for Single Album 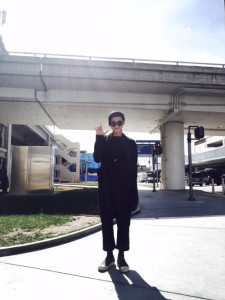 Hot on the heels of the announcement of a collaboration with MFBTY just a few days ago, Rap Monster is showing no signs of slowing down. BTS‘s leader will be releasing a single album in March with help from iconic hip-hop artist Warren G.

Photos posted on Twitter hinted at solo material, showing Rap Monster in LA with Warren G and rapper Mike Slice. This is not the first time Warren G has worked with Rap Monster and BTS, as he participated in the group’s reality show American Hustle Life back in July.

Rap Monster has released individual tracks before on BTS’s Soundcloud, but this single album will be his first official solo venture through Big Hit Entertainment.

It’s looking to be a busy year for Rap Monster, who is also appearing in tVN‘s newest talk show Problematic Men, which is set to air later this month. Currently, BTS is preparing to finish their “Red Bullet” concert tour in China and Taiwan before kicking off a second concert series in Korea.

As of now, the tracklist on Rap Monster’s single album has yet to be announced. What do you think, readers — anticipating this or not?