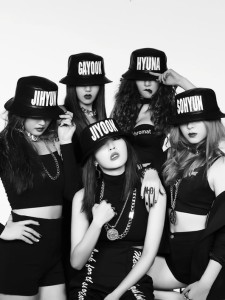 Amid all the praise and excitement surrounding 4Minute‘s “Crazy,” some fans have been throwing around accusations of cultural appropriation in the video. Watch the video, and it’s easy to see that the accusations ring true — from the gold chains and the bucket hats to Hyuna and Jiyoon‘s mannerisms as they rap, one can see clearly the influence of hip hop culture and style. As Morgan pointed out in her review of the MV, the style is meant to do nothing but enhance their “bad girl” image, leaving any cultural importance or significance of hip hop in the dust in favor of flashiness.

Morgan also articulates a common feeling among fans regarding the relationship between K-pop and hip hop; since the two are often so closely tied together, it’s easy to “become desensitized to the appropriation of hip hop culture” within K-pop. However, for those who closely identify with hip hop as a culture (especially black fans), this desensitization process is much harder to complete. It’s one thing to notice that a culture you aren’t connected to is being exploited, but it’s a whole other feeling when the culture being exploited is your own. 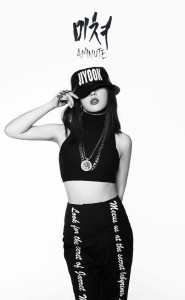 Of course, the line between appreciation and exploitation is frustratingly blurry. Although hip hop is a global genre, the music alone isn’t enough to convey both its historical and cultural importance. If outsiders to hip hop culture don’t make an effort to learn about its roots and significance, chances are that they won’t learn by simply listening.

Within the K-hip hop and K-pop scenes, the lack of knowledge about hip hop as a meaningful and complex art form is a bigger problem simply because of the language barrier. Videos with serious messages, such as Kendrick Lamar‘s “Swimming Pools,” often don’t have videos that clearly convey what the lyrics are saying, and without being able to understand the lyrics, it could be easy to see it as just another song promoting the “alcohol, drugs and women” stereotype that is associated with hip hop.

Even with this complicating factor, there are encouraging moments of Korean artists with an interest in hip hop attempting to educate themselves. BAP leader Bang Yongguk, for example, is known for studying up on Martin Luther King, Jr. and the US Civil Rights Movement. All seven members of BTS took a trip to Los Angeles and spent time around black hip hop artists, including Coolio, who quickly exposed the boys’ ignorance about the genre they profess to love. The schooling that Coolio inflicts upon BTS in that episode of their show American Hustle Life is indicative of the wider ignorance of idols, and even K-hip hop artists, about hip hop.

No one will deny that it’s unrealistic to expect every idol, or even every rapper, to research how hip hop was created as an outlet for impoverished black youth to express themselves artistically. Because hip hop is seen more as a fashion style than a culture, cultural appropriation is basically inevitable. At this point, it is probably more healthy for people to just accept that idol groups will sometimes spontaneously adopt hip hop style to enhance an image, like 4Minute has done with “Crazy.” No one is going to believe that the girls have chosen to convert to a hip hop group, much less that they (or their stylists) have done their homework; it’s quite unlikely that they thought about how gold chains are worn by rappers to display that they have attained wealth despite systematic racism and widespread poverty among black people in the US. Expecting them to bother learning about the significance of fashion statements is basically futile, but accepting that this kind of appropriation will happen does not mean condoning it.

At the same time, there is one component of 4Minute’s hip hop style that I really cannot accept — the braids that Hyuna and Gayoon show off during the video. For the girls, these braids are just another symbol of their “bad girl” image, a way to express that they are edgy and urban enough to take on hip hop style from head to toe. Why is this different from wearing gold chains or bucket hats though? Isn’t hair simply just another component of an overall fashion style? Perhaps, but hair is also something a lot more permanent than articles of clothing or jewelry. You can completely change your wardrobe, switch from a girly style to a hip hop style, but changing your hair is harder; women of all races spend time using heat tools to change their hair texture, and many use chemicals to achieve a more permanent change. Those with curly hair will understand the struggle that curls pose on a daily basis, and black men and women are most often the ones who have to deal with taming our curls into a manageable form. 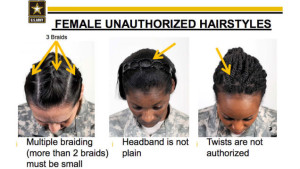 Braiding developed long before any type of chemical treatment as a way to help black men and women cope with the burden that curls can pose. Braiding techniques originated long (long long) ago in Africa and have since developed into an art form all on its own. Braids, twists and locs have existed for much longer than hip hop, and these hairstyles are not a symbol of hip hop style at all; the connection is a consequence of the fact that most rappers have been black people, who are also the people who tend to sport cornrows, box braids, locs and other styles. People devote their lives to mastering the methods of braiding hair, giving black people vibrant and unique ways to manage our hair, which not only is often hard to style each day but also receives scorn as being “nappy,” “unkempt” or “untamed” when worn naturally.

The fact that non-black people want to wear braids or locs is a sign that these styles are beautiful, right? We should feel flattered that people want to imitate our hairstyles, shouldn’t we? Not exactly. Rather, the evidence points to the fact that braids are considered beautiful only when worn by someone who is not black. Black women and men who wear these styles are often called “ghetto” and “unprofessional.” There have been numerous cases of organizations trying to ban braids and other similar styles. Men with locs are called “thugs” and are excluded from certain activities or jobs for looking unprofessional. Young black girls get suspended from school for having their hair in locs or braids. Even celebrities aren’t exempt from such criticism.

Strangely enough, this scorn seems to turn to praise when non-black people braid or loc their hair. For some reason, these hairstyles become “cool,” “urban,” “edgy” or some other trendy adjective. The women of 4Minute are called fierce and sexy for wearing their hair braided. Male idols wear cornrows or braids as a way to give off a hip hop image, even if they aren’t rapping (though in many cases, the results aren’t very cute). Block B‘s Zico wore dreadlocks during promotions for “Nilili Mambo” in order to enhance the dangerous, dirty scoundrel character he portrayed in the music video, and fans loved it. 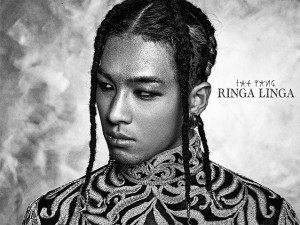 The stereotypes that come with these hairstyles turn positive as well since people can separate the person from the hair when it comes to idols. Hyuna and Gayoon might look like bad girls, but we all know they aren’t really “bad” in the hip hop sense; no one is going to call them ratchet, make assumptions about their lack of education or automatically label them as sexually promiscuous. When Taeyang or Zico wears traditionally black hairstyles, no one is afraid that they are dangerous thugs — we might consider them to have a dangerous or “thug” look, but most people wouldn’t be afraid that Taeyang would rob them. Black men and women, though, are stuck with these negative stereotypes since many people still don’t know that wearing locs does not mean you smoke weed nor does sporting cornrows mean you steal cars.

If you consider the drastically different responses to black people with braids and non-black people with braids, it might become a little easier to understand why the appropriation of these hairstyles is a big deal to some people. Black men and women are stuck with hair that is often insulted for being “crazy” when let loose, and braids are an alternative to changing our hair texture with chemicals or flat irons. Braids are art, and for many black people, wearing braids is a lifestyle that involves receiving constant criticism. Our hair is an aspect of our life that we cannot easily change, and it hurts to be constantly looked down upon for a trait that we had literally no role in selecting. Through braids, we rebel against societal prejudices against natural black hair and reject the idea that only straight hair is beautiful. If you have straight hair, you will not be helping the cause by sporting cornrows or forcing your hair into locs.

People who speak out about this issue are not simply trying to find something to complain about. We are not jealous that the K-pop stars with these hairstyles look better than we do (which is not even the case most of the time). We are simply upset that we are called derogatory names and discriminated against for something that others with different complexions receive heaps of praise for. I am all for cultural exchange but only when it is done on equal terms. This sort of cultural appropriation, though, is not something I can just excuse without calling out. Until young black girls can go to school with cornrows and not be called “ghetto” like I was, I simply don’t want to see idols, no matter how much I love them, sporting these styles.