“Ode to My Father”: A Tearful History 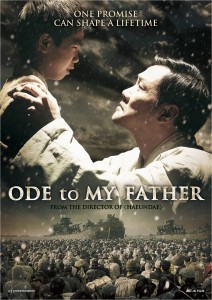 It hasn’t even been a year since 명량 (The Admiral: Roaring Currents), aka the most successful movie ever at the South-Korean box office, has been released. Yet, another movie is already close on its heels: with almost 14 million sold tickets, 국제시장 (Ode to My Father) has just become the second most-watched movie in the country.

In a nation as patriotic as South Korea, it doesn’t seem like a coincidence that both of these films portray decisive moments in the country’s history. In 국제시장 specifically, this is done by telling the story of one man’s life from the middle of the 20th century until today.

Yoon Deok-soo (Hwang Jung-min) is introduced to the viewer as an old man reminiscing about his past, but the story chronologically starts early on in the Korean War in Hungnam, North Korea. Deok-soo is still a little boy, and he and his family are fleeing from death and destruction onto the ships of international forces within the region. Amid the chaos, Deok-soo loses contact with his sister and his father, who leaves the ship once again to search for her, doesn’t manage to make it back in time and has to stay in Hungnam.

Once Deok-soo, his mother and his two younger siblings arrive in Busan, life doesn’t get much easier. Taking the responsibility of supporting the family onto himself, Deok-soo leaves for Germany when he’s old enough to work and spends months working in a dark coal mine. The only silver lining is Young-ja (Yunjin Kim, whom some may know from Lost), a young nurse he meets and falls in love with. After a mining accident, both return to Korea and marry.

Yet this complete bliss, too, is only short-lived. The family once again struggles for money, and so Deok-soo leaves the country again. He ends up in the midst of another battlefield in Vietnam, where he tries to make a living and to send something back to his family. Deok-soo returns injured, but years later finally gains some hope when it seems like there might be a possibility for him to find his lost father and little sister again.

It is not difficult to understand why 국제시장 appeals to Koreans both in and outside of South-Korea, as well as other international viewers. While the approach of showing historic events as they impact the life of an individual, and the generations following him, makes Korean history accessible to those who were unaware of it before, it is also incredibly relatable.

As its incredible success in South Korea proves, this mostly seems to hold true for viewers with Korean heritage, who can directly relate to the historical events portrayed in the movie. But, due to its approach, there is also a cross-cultural appeal that might affect many international viewers. At one of the most touching moments in the film, Deok-soo says to his wife,

“It’s such a relief that it was us, and not our children, who were born during such a difficult time.”

Wouldn’t this ring true for many viewers whose parents or grandparents lived through the wars of the last century? 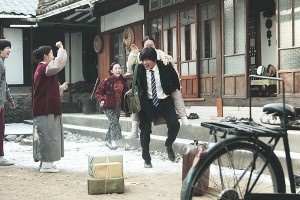 Another aspect of the story that may seem relatable and/or touching to many viewers is Deok-soo’s continued sacrifices for his family. The audience sees the main character discard many a dream so that he may support his family, without ever seeming to hold this against them.

Additionally, the visuals of 국제시장 are also a treat. While the aging techniques used on Hwang Jung-min and Yunjin Kim during their older years are not utterly convincing, the costumes and sets are a feast for the eyes. 국제시장 is not afraid to lay the pathos on thick, and its cinematography reflects that. Similarly, the musical score is just as dramatic. Sweeping strings underscore the key moments in Deok-soo’s life, and if the viewer is willing to let this affect them, they will be led through many emotions during the two hours they spend watching this movie.

This also leads us to one of the big weaknesses of 국제시장: the obviousness with which it tries to manipulate the feelings of its viewers. The film is melodrama at its finest, meaning that it will do everything in its might to extract some tears from its audience. The storyline makes this abundantly clear, as does the musical score, as does the performance of the actors which at times goes pretty overboard. 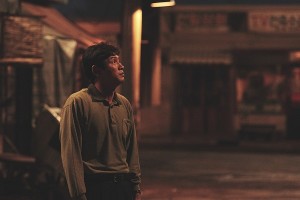 The melodrama of the movie does not necessarily have to be a problem by itself, but it becomes more dangerous when one looks at the criticism the movie faces in its home country. Because, despite its financial success, 국제시장 has been called conservative, overly patriotic and thoughtlessly nostalgic.

Taking all of these factors into consideration, 국제시장 gets a 3.5 out of 5. This is of course a deeply subjective judgment — if any potential viewers loathe overly dramatic productions, then they should stay very clear of this film. But if the reader is able to critically reflect the way in which the movie tries to manipulate them, while still enjoying the personalized approach 국제시장 chooses in regards to history, then this film should be recommended to them. (On a side note, it should also be said that the short cameo of DBSK’s Yunho as future trot superstar Nam Jin doesn’t hurt either.)