Love can be sweet, and it can also turn sour, when combined with all the real world responsibilities that movies often fail to acknowledge. That seems to be the message behind the movie Sweet & Sour, directed by Lee Gye-byeok and based on the book Initiation Love by Kurumi Inui. The rom-com released on Netflix early last month is a realistic depiction of love gone sour, with a twist that intrigues until the end.

The movie, as most rom-coms do, features a love triangle between the three leads. Jang-hyuk (played by Jang Ki-yong), an engineer, and Jung Da-eun (played by Chae Soo-bin), a nurse, live a happy life as a couple in Incheon until Hyuk is transferred to Seoul. Once he’s there, a combination of factors, one of which is his coworker Han Bo-yeong (played by Jung Soo-jung), wreaks havoc on his relationship and his feelings for his girlfriend back home.

Sweet & Sour is a relatively unassuming movie about love that keeps its subjects grounded in reality. If anything, it seems like a documentation of Hyuk’s relationship with Da-eun, starting with their meet-cute to their eventual ending as a couple. Split into three main parts, the first part, called New Sneakers, opens with Lee Jang-Hyuk (played by Lee Woo-je) being hospitalized with Hepatitis B. While being treated, he meets Da-eun, and he develops feelings which she seems to reciprocate.

Warm tones fill the screen as their feelings blossom, though at this point Jang-hyuk seems to be the only one who is confident in his feelings. Da-eun’s reactions to his initiations flip between sweet and sour, and Da-eun’s true feelings and intentions remain a mystery. The film makes use of text bubbles on screen to demonstrate the text messages that characters send and receive, and on Jang-hyuk’s end, it’s clear that nobody around him believes that she is even a real person. His friends make fun of him and say that he’s lying, because there is just no way someone who is not conventionally attractive due to his size could ever win over someone like Da-eun. However all that matters to him is that Da-eun eventually invites him on a trip to Jeju Island and gifts him brand new sneakers, and he vows to lose weight for their next trip.

This is where the movie transitions into part two: Old Sneakers. The first scene for part two opens with Hyuk running, in a battered version of the sneakers that were just given as a gift. Time has supposedly passed, and we see Jang Ki-yong on screen for the first time. He and Da-eun are a couple settled into their relationship, though his transfer to a job in Seoul uproots that stability. This part of the movie is when the love triangle kicks in, and Hyuk’s animosity with his new coworker Han Bo-yeong suggests a classic enemies-to-lovers storyline.

Unlike the first part of the movie, blue and cool tones dominate the setting at his new workplace, hinting at his cooling feelings towards Da-eun back at home in Incheon. From their appearances to their personalities, Da-eun and Bo-yeong seem like polar opposites. Da-eun has permed brown hair and seems sweet with her sour moments. On the other hand, Bo-yeong, with her straight black hair and red lipstick, seems sour to Hyuk until her sweeter, clumsier side emerges. The two women, who live in two different cities and only have Hyuk in common, never meet or speak in the film. Though the film is undoubtedly centered on Hyuk and his relationship struggles, neither Da-eun nor Bo-yeong are ever villainized. Indeed, all three are everyday humans, struggling with work, commuting, and getting a foothold in a tough job market on top of their relationship struggles.

As Bo-yeong and Hyuk bond and Da-eun is left only with text messages containing empty promises from Hyuk, there is a sense of anticipation for the dreaded cheating scene. Indeed, much of the movie passes in this fashion. Sweet & Sour is sometimes a record of the mundane as the viewers watch Hyuk suffer in the commute between Incheon and Seoul, and get into arguments over little things like forgetting to change the lightbulb. While relatable depictions of love and relationships can be welcome, much of Old Sneakers is predictable and can be bland in its pacing. To its credit, the cheating scene never happens, and the breakup scene is worth a chuckle if only for the worker at the drive through who bears witness to it. The film also has its quirky moments, such as the unnamed man who works in Hyuk’s office building that ships Hyuk and Bo-yeong.

The film does drastically pick up in the last part of the movie, which is also the shortest part. Realizing that his feelings for Da-eun have not changed, Hyuk races to the airport in a last-ditch effort to catch her before she leaves for Jeju Island. A trip that they had booked when they were still a couple, Hyuk had conceded the trip to Da-eun and told her to go with someone else. In typical rom-com fashion, he sees her smiling as he runs towards her…only to crash into somebody else. The other person? It’s Jang-hyuk, from the first part of the movie, who is the person actually going to Jeju Island with Da-eun.

At this point Sweet & Sour rewinds, and it turns out that the story was not being told in a linear timeline. Instead, the first part, New Sneakers, and the second part, Old Sneakers, had been happening simultaneously. Da-eun’s odd behavior from the first part of the movie clicks into place as it’s revealed she turned to Jang-hyuk the patient when she felt neglected by Hyuk, her boyfriend. The twist is the most intriguing part of the movie, so much so that it warrants a rewind to the beginning of the film. Details like missing rings and crying at replaced light bulbs start to make sense, but it also pokes fun at the audience for assuming a weight loss transformation took place.

The movie keeps it real until the end, and a romantic reconciliation complete with tears and a kiss is not a part of the movie’s message. Predictable in some parts and not in others, Sweet & Sour is a mellow watch that goes against the grain of dramatic romantic movies. It might not be what you asked for, but sometimes a little reality check is just what we need. 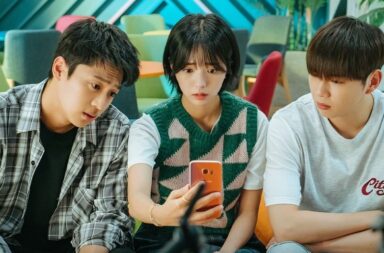 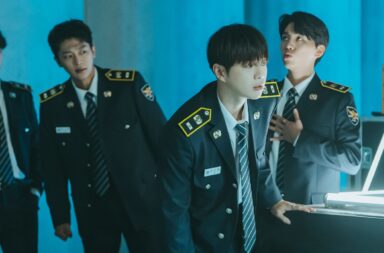