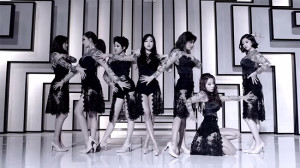 After waiting almost a year and a half, fans of girl group Rainbow have finally been gifted a new single. The ladies take a turn for the more elegant with “Black Swan,” a song whose title evokes images of the critically acclaimed film of the same name. I’m coming to Rainbow fresh, as I haven’t ever listened to anything the group’s released, so I went in with very few expectations, and I’m happy to say I wasn’t disappointed.

“Black Swan” opens with leader Jae-kyung walking plaintively to a panel in an enclosed room. She looks into the panel’s peephole. It’s clear from the look on her face she’s seen something that’s frightened and possibly repulsed her — an image of herself curled up in a chair surrounded by a shallow pool of water. We then get an introduction to the group as a whole as each member poses rather gracefully, providing a cutting silhouette to the muted pastel color palette of the MV.

Before one can truly comment on the video, it has to be said — the song is rather generic. “Black Swan” begins and ends with promise, a beautiful piano melody providing a chilling introduction at video’s opening and a fading final note at its end. However, when the video starts in earnest, any illusions that the song could be something unique or at all leave an impression are quickly shattered. It’s basically a standard K-pop song, plenty of thumpa-thumpa and a generic electric foundation. But the focus here, as is oftentimes the case, is certainly not the music. It’s a good thing the music video makes up for the lackluster song.

There is some truly gorgeous photography in this music video.  The color palette — a muted pastel which blends seamlessly into the black-and-white undertones — is just stunning. Also kudos to the costuming department. The fashion is perfection, each woman wearing a version of a classic black lace dress complete with mini-train during the dance sequences and the moments outside the door, then dressed in a variously cut white numbers in their individual rooms. The theme of the video is obviously a close play on that of the film for which the song gets its namesake. Each member walks up to the same panel, clad in black. It’s a cruel sort of voyeurism. They can only stand by as they watch their more innocent selves trapped, confused and in a state of mental decay.

It’s a beautifully shot video with a darker theme that not many girl groups have explored: the disintegration of the mind. Hyun-young is lost in a barren forest, surrounded by the more severe ravages of winter. Yoon-hye is surrounded by a broken reflection of herself, mirrors cracked and splintered yet still standing to offer a warped image of her face. Woo-ri is trapped in what vaguely resembles the classic Escher room of stairs, winding and never leading anywhere. Two of the members are stranded in rooms whose walls seem to be melting: black paint falling from the white walls Ji-sook’s room, while white paint falls from the black walls of No-eul’s, both members being swallowed up in the mess. Seung-ah is enclosed in a room with no doors and a mid-length mirror, trapped without escape. And, of course, a glimpse into the paranoid mind of our leader as she first repels, then writhes, in stagnant water, as if accepting her madness and letting it consume her as the paint consumed Ji-sook and No-eul. 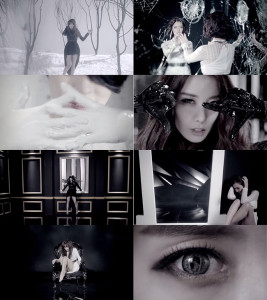 The video ends on the famous last line of the film: “It was perfect.” That line in the wake of the darkness of the video, and certainly the visual of a descent into madness, is chilling and effective.

Of course, what music video would be complete without the obligatory choreography interspersed between shots? “Black Swan,” unfortunately, offers much of the same in that department. It would’ve been a treat to see something a bit more elegant to match the theme of the MV and the allusion to the famous film based on Swan Lake. However, we get more of the same choreo part in parcel with all girl groups who try a darker, sexier theme — a lot of hip sway and butt wiggle action.

I just have to know, who is the choreographer for these so-called sexy treatments for girl groups? They either need to be fired, or someone in the company needs to give them a lesson in the art of seduction and sexuality. Truthfully, 75% of the choreography was at least imaginative, if not terribly sophisticated. However, for some reason the choreographer got in his/her head the video was incomplete without some buns and thighs. It’s a shame. The girls really have beautiful lines, and the dancing that was actually dancing was at least lovely and accentuated those lines pretty well. Execution left much to be desired, being mostly lackadaisical and tired rather than sharp and defined, but that shouldn’t suggest that the idea (for the most part) wasn’t at least commendable. 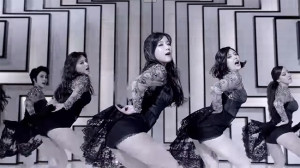 It’s quite a daunting task to try to live up to a piece of pop culture that’s become as iconic as the film that takes a deeper look at the oftentimes grisly side of ballet. However, with some stunning photography and an intriguing theme, Rainbow did a commendable job.