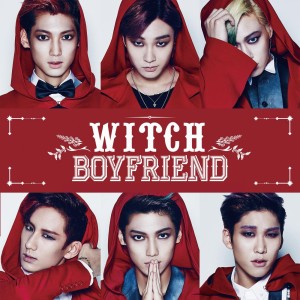 It’s been obvious to many that Boyfriend has been synonymous with bubblegum and boyish cuteness in K-pop. The boys, however, have begun shifting into more mature territory. “Witch” is the group’s latest transition into concept that ventures into that kind of territory.

From the get-go, it’s clear that the group has beefed up their presentation skills. The choreography and performance takes on a theatrical and veiled supernatural theme, which involves intricate moves. I was particularly surprised by Jeongmin — I had no idea he had the sort of skills that he’d put on show. Donghyun also plays a ring-leader sort of character. The red curtains act as backdrop and they’re only parted to reveal the members during their respective segments. It’s almost as if it’s a show or play. Even if the song doesn’t appeal to you, you’d be intrigued by the setup.

Interspersed with all the dance scenes is the plot. Boyfriend plays a group of (witchy?) vampires. Their appearances are relatively human, and their characters appear to be reading a manual on how to be more human. But as with all vampires in the fictional world, they’re ready at any time to unleash their angry vampyric selves on mortals.

The vampire boys find themselves under attack by a woman fighter dressed in a red cape like Red Riding Hood. She’s going about killing things or people that have been branded with a “BF” tattoo. Upon learning of her killings, as well as her attack on group member Hyunseong, the boys become set on killing her. Vampyric Boyfriend fails to do so, but their characters get to duel it out.

The twist: The vigilante killer is actually Boyfriend’s friend — a person whom they trusted. This ties in well with the lyrics, which are noted below — a close female companion destroying them at the end.

The acting may be a bit hammy, but the boys can be forgiven for that. They’re only using a trope that has afforded other groups the chance to ease themselves down the charismatic, mysterious route. 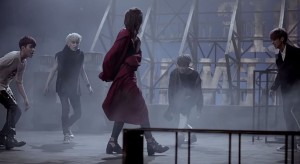 In general, the song is good. While there are a little too many effects and electronic sounds, in both the song and MV, the music isn’t too bad. It has an old school-new school mix feel. Think Backstreet Boys meets Boyfriend. I grew up in the NKOTB/BSB/N*Sync-era of pop music, and this is probably why I like it.

The flute and heavy bass line add to the overall dark feel of the song. Add in some eerie backgrounds, and you’re set for a song about being bewitched. The use of the flute and piano is what keeps this song from being just another unimpressive electronic song. Additionally, the use of the timpani during the bridge is pretty great. “Witch” would work really well in an orchestral arrangement — which is what it should have been.

Do you ever like a song, then look up the lyrics and just shake your head? That’s what “Witch” is like. If you ignore the hook, the lyrics to “Witch” aren’t particularly bad. Although not directly stated — since the word “witch” is never stated anywhere — the guys see the woman as a witch due to her control over them. She has bewitched them to the point where they really don’t care what happens.

You’re pretty because you’re rough, you’re attractive because you’re dangerous
I know I’ll get hurt every time but I like your games
There’s no reason why I can’t do this, I’ll give you my everything
I just need to be by your side
cause your body goes boom bara boom

It’s the hook that gives me pause. Firstly, despite the line being catchy, it ends up being cheesy. The concept of Boyfriend is masculine, but the hook is incongruent and immature. Secondly, the line chalks up the boys’ utter doormat behavior to the woman’s body. It’s like saying “Girl, you’re awful, but your body is banging so it’s all good.” What exactly is the message being sent? That men are easily manipulated by women with nice bodies? Perhaps, but you probably shouldn’t be saying it out loud. Nice way to make yourself an easy target, though.

It’s obvious that Boyfriend is trying to upgrade their image from cute boys to men. They aren’t doing a terrible job of it, concept-wise, but their music is still in need of a boost. While waiting for that “big breakthrough,” “Witch” would probably be a good enough song to tie you over.