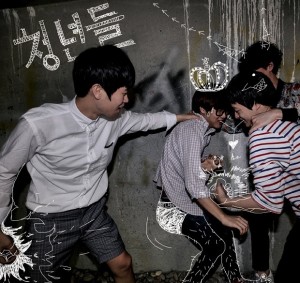 Welcome, welcome! This week, we’re highlighting rock band The Lads, made up of Seung-kyu (guitarist, vocalist), George (guitarist, vocalist), Min-hyuk (bassist), and Hae-ma (drummer). The group confesses to a garage rock sound, bringing their alternative flair to the genre to maintain attention. The group’s music has a tendency to be upbeat with repeated lyrics, but you will still find those slower songs or longer sets of lyrics in between the other typical songs.

The group’s first EP is titled Youth and was released in 2013. The five song album provides a rudimentary taste of the talent the group contains. Their second release was a full-length album, Lads on the Street, in 2014. Of the eleven tracks, three are repeats from their first EP, but the album presents a cohesive front nonetheless. The album also contains a number of tracks with solely English lyrics, which differs from understandably Korean-language albums that most K-indie bands or groups produce.

“108” is the first track of Youth, displaying the bright notes to their sound. The Lads interweave stilted vocals and a repetitive guitar line to bolster verses that blend into a more active chorus. The song is rightfully the first track of the first album as it represents the band’s typical sound very well.

“The Best Thing of This Night,” track 5 of Lads on the Street, begins seamlessly from the end of the interlude that track 4, “Stay Young #1” presents. And that means that the start is jarring by itself, grabbing attention by ending that sound so quickly. This track takes a slower beat and uses it to add more inflection into the vocals. They remain flat but fluid, appropriately injecting desperation and exclamations where needed.

Repetitive but oh-so-catchy, “Texas Song,” from both Youth and Lads on the Street, is that song that everyone can sing along to because it’s so easy to remember. It basically repeats the same two verses over and over, with minor variations.

I said, “It’s raining outside and little cold.
I could be your blanket or something else.”
Well I tried.
You said, “It’s okay to be alone. I don’t want you baby.
That’s all I want.”
Well I’m crying.

There’s something about this set of lyrics that is so vulnerable yet so punchy, petulant, and oddly entertaining. As the song progresses, it amps up the sound and heaviness, appropriately so until that last scream at the end.

“If I Had,” from Lads on the Street, is a sharp contrast to the previous song. The track strips down to the basics, focusing on that thin timbre and occasional discord. The song slowly swells and quiets down, staying rhythmic and consistent throughout and successfully conveying the fitting despair and gloom.

Also from Lads on the Street is “Close Your Eyes.” It’s much more energetic, and like “Texas Song,” plays with the same set of lyrics repeatedly. And despite having that faster beat, the vocals retain this lazy drawl that relaxes the song a tad.

“We’re Just Nothing” makes an appearance on both Youth and Lads on the Street, and it’s obvious that it’s one of the band’s earlier songs because of the generally harsher way the instrumental plays — there’s cleaner production quality and an overall smoother listen for the newer tracks of Lads on the Street. That’s not to say that this song is impossible to listen to or anything; quite the contrary, the song fits in well as one of the ones that best summarizes the group’s sound, capitalizing on a fast beat and the vocalists’ styles.

The Lads seem to be at the start of their career but have already established a definitive sound. They’ve shown improvement between their two albums, and it’ll be interesting to see what else the bad puts out in the future.