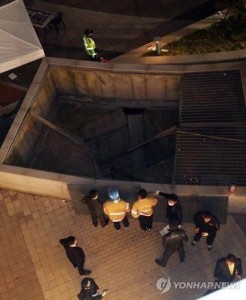 This week brought some incredibly tragic news, with 16 people dead and up to 11 injured at the 1st Pangyo Techno Valley Concert in Seongnam, south of Seoul, on Friday. A ventilation grate concert-goers were standing on had given way, resulting in a fall of over 15 metres (though other sources say 10 metres) into the underground car park below. This was after multiple requests from concert staff for concert-goers to not stand there, though the grate was also not physically cordoned off.

Many K-pop acts were performing at the concert, including 4minute, during whose set the incident occurred. In response, Cube Entertainment released an official statement explaining their lack of knowledge of the incident until afterwards, and expressed their condolences to those affected.

It has also been reported that the government official in charge of security apparently jumped to his death following this event.

This is another hit for South Korea’s public safety record, following the Sewol ferry tragedy in April, and another tragedy related to K-pop after the deaths of Ladies’ Code members EunB and Rise in a car accident.

Readers, what are your thoughts on this tragedy? Have you ever experienced something like this? What do you think concert organisers and attendees can do to make events safer?

We at Seoulbeats extend our sincere condolences to the families of those who have passed and wish for the full and speedy recovery of those injured.